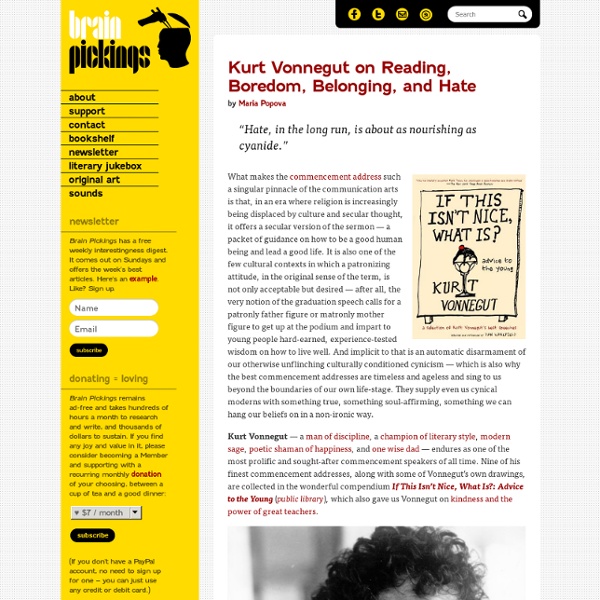 by Maria Popova “Hate, in the long run, is about as nourishing as cyanide.” What makes the commencement address such a singular pinnacle of the communication arts is that, in an era where religion is increasingly being displaced by culture and secular thought, it offers a secular version of the sermon — a packet of guidance on how to be a good human being and lead a good life. It is also one of the few cultural contexts in which a patronizing attitude, in the original sense of the term, is not only acceptable but desired — after all, the very notion of the graduation speech calls for a patronly father figure or matronly mother figure to get up at the podium and impart to young people hard-earned, experience-tested wisdom on how to live well. Kurt Vonnegut — a man of discipline, a champion of literary style, modern sage, poetic shaman of happiness, and one wise dad — endures as one of the most prolific and sought-after commencement speakers of all time. We are supposed to be bored. Related:  meaning of life • Authors

Viktor Frankl on the Human Search for Meaning by Maria Popova “Live as if you were living already for the second time and as if you had acted the first time as wrongly as you are about to act now!” Celebrated Austrian psychiatrist and Holocaust survivor Viktor Frankl, born on March 26, 1905, remains best-known for his indispensable 1946 psychological memoir Man’s Search for Meaning (public library) — a meditation on what the gruesome experience of Auschwitz taught him about the primary purpose of life: the quest for meaning, which sustained those who survived. For Frankl, meaning came from three possible sources: purposeful work, love, and courage in the face of difficulty. In examining the “intensification of inner life” that helped prisoners stay alive, he considers the transcendental power of love: Love goes very far beyond the physical person of the beloved. Frankl illustrates this with a stirring example of how his feelings for his wife — who was eventually killed in the camps — gave him a sense of meaning: Donating = Loving

Writers Who Published Great Books Before Age 25 Picture it: teenage Mary Shelley was on a vacation getaway, with her husband Percy and some of his rambunctious poet friends, like that rogue Lord Byron… and out of the group of legends, it’s Shelley herself who arguably published the greatest work of all at the ridiculous age of 20: Frankenstein; or, The Modern Prometheus, a book that has penetrated our human consciousness. In honor of Shelley’s birthday this month, here’s a list of 25 other writers who created heartbreakingly beautiful work before they could get a discount on a rental car or have their publishers demand an active Twitter account. If you’re 26, get on out of here. (However, interestingly enough, 26 seems to be a magic age for a lot of writers, starting with Thomas Pynchon, which is a whole other list.) Norman Mailer — The Naked and the Dead Mailer became a star when this book was published.

Learned Optimism: Martin Seligman on Happiness, Depression, and the Meaningfu... by Maria Popova What 25 years of research reveal about the cognitive skills of happiness and finding life’s greater purpose. “The illiterate of the 21st century,” Alvin Toffler famously said, “will not be those who cannot read and write, but those who cannot learn, unlearn, and relearn.” Our outlook on the world and our daily choices of disposition and behavior are in many ways learned patterns to which Toffler’s insight applies with all the greater urgency — the capacity to “learn, unlearn, and relearn” emotional behaviors and psychological patterns is, indeed, a form of existential literacy. Last week, Oliver Burkeman’s provocatively titled new book, The Antidote: Happiness for People Who Can’t Stand Positive Thinking, prompted me to revisit an old favorite by Dr. Seligman begins by identifying the three types of happiness of which our favorite psychology grab-bag term is composed: The optimists and the pessimists: I have been studying them for the past twenty-five years. Share on Tumblr

Halloween Costume Ideas From Famous Writers Halloween is just around the corner. Some people like this holiday because they can spend more time with their kids seeking candy, other part love this holiday for girls using the day as an excuse to dress like, hmm... cheeky girls. But every year we face the one huge common problem - where the hell I can find mind-blowing Halloween costumes or costume ideas? EssayMama.com (as a caring mother) is here to pamper her kids with this infographic, where you can find the answer. These are the most hipster costumes ever. Happy Halloween! Created by Jessica Millis (Twitter @MillisJess) Read all news Rating: 4.8/5 (485 votes) 100% unique custom academic papers written to your exact details. This service has surpassed my expectations!

12 Lifestyle Factors That Make You Feel Depressed Many clients come to me believing there is “something wrong” with them. They believe they’re fundamentally flawed, or they're making a last-ditch attempt at life, often with plans to end theirs if things don’t improve. However, more often than not, the root of their depression is not a biochemical imbalance or a life-sentence. Rather, it’s a result of one or more of the following: 1. Of all the research out there, social connection is one of the most proven ways to prevent and cure depression. 2. Ever been through a breakup, lost a job, experienced the loss of a family member or pet, or found yourself out of school for the first time? 3. Ever noticed how much more fragile and lethargic you are after a bad sleep? 4. From an existential perspective, we require meaning in our lives for happiness. 5. Imagine how worthless you’d feel if you had a verbally-abusive friend, partner, or parent beside you at all times. 6. 7. 8. 9. Studies have shown that chronic stress can lead to depression.

130, Italo Calvino Upon hearing of Italo Calvino’s death in September of 1985, John Updike commented, “Calvino was a genial as well as brilliant writer. He took fiction into new places where it had never been before, and back into the fabulous and ancient sources of narrative.” At that time Calvino was the preeminent Italian writer, the influence of his fantastic novels and stories reaching far beyond the Mediterranean. Two years before, The Paris Review had commissioned a Writers at Work interview with Calvino to be conducted by William Weaver, his longtime English translator. —Rowan Gaither, 1992 Italo Calvino was born on October 15, 1923 in Santiago de Las Vegas, a suburb of Havana. The future writer studied in San Remo and then enrolled in the agriculture department of the University of Turin, lasting there only until the first examinations. Afterward, Calvino began writing, chiefly about his wartime experiences. In 1956 Calvino published a seminal collection of Italian folktales. —William Weaver

Philosopher Martha Nussbaum on How to Live with Our Human Fragility by Maria Popova “To be a good human being is to have a kind of openness to the world, an ability to trust uncertain things beyond your own control.” In 1988, Bill Moyers produced a series of intelligent, inspiring, provocative conversations with a diverse set of cultural icons, ranging from Isaac Asimov to Noam Chomsky to Chinua Achebe. It was unlike any public discourse to have ever graced the national television airwaves before. The following year, the interviews were transcribed and collected in the magnificent tome Bill Moyers: A World of Ideas (public library). But for all its evenness of brilliance, one conversation in the series stands out for its depth, dimension, intensity, and timelessness — that with philosopher Martha Nussbaum, one of the most remarkable and luminous minds of our time, who sat down to talk with Moyers shortly after the publication of her enormously stimulating book The Fragility of Goodness: Luck and Ethics in Greek Tragedy and Philosophy. Martha Nussbaum

Joel Gardner/Interview — ragazine.cc Thirty Years Later: A Conversation on John Gardner With John SmelcerContributing Editor This year marks the 30th commemoration of John Gardner’s tragic motorcycle accident. Poet, playwright, translator, medievalist, he is the author of such novels as Nickel Mountain, Mickelsson’s Ghosts, The Sunlight Dialogues, and October Light, which received the National Book Critics Circle Award in 1976. JS: I knew your father from our letters. JG: Dad was indeed a generous teacher. JS: In 2004, my book Without Reservation won the Milt Kessler Prize for a book of poetry published in a given year by an American poet over 40. JG: As long as you’ve been in Binghamton, you must have a lot of friends and colleagues who were also friends of my father, right? JS: I’ve met Liz at a few readings, but as far as I know I’ve never met Susan or Bernie. I only knew Gardner from our letters. But ever since I moved to the same town and haunt the same university halls, I have this recurring dream: Joel and his ride

A Moment in Eternity: Adolfo Bioy Casares’ The Invention of Morel | anendurin... Octavio Paz says calls The Invention of Morel, “without exaggeration… a perfect novel.” According to Borges, “to classify [it] as perfect is neither an imprecision nor a hyperbole.” It has influenced creations as diverse as the works of Gabriel Garcia Marquez, the influential French film Last Year at Marienbad, and the television series Lost. Wikipedia says (albeit, without citation) that “many consider it… to be one of the best pieces of fantastic fiction.” And if that isn’t enough to pique one’s interest, the principal character, Morel, is named after H.G. First things first - The Invention of Morel is entirely resistant to genre classifications. The second thing is that it is virtually impossible to write a review of this short, 90-page novella, because everything turns upon a single premise that, if revealed, would spoil the story, but without which nothing would make any kind of sense. At this point, other strange things begin to happen. “Yet Morel’s projections belie his words.