Dan Gilbert: The psychology of your future self 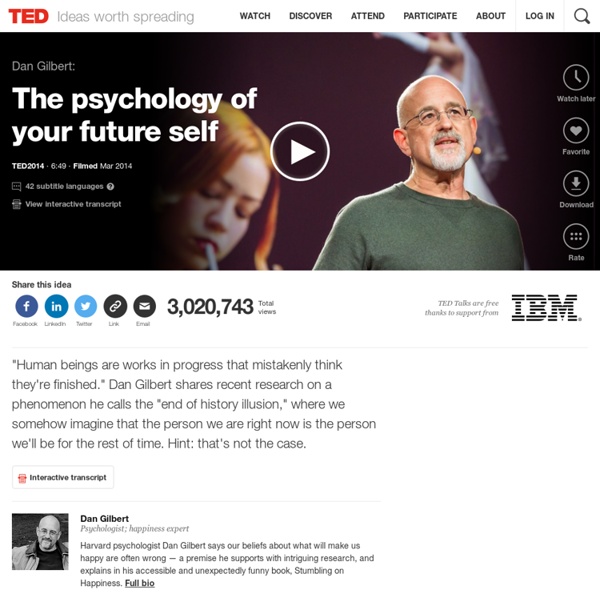 Dan Gilbert: The psychology of your future self "Human beings are works in progress that mistakenly think they're finished." Dan Gilbert shares recent research on a phenomenon he calls the "end of history illusion," where we somehow imagine that the person we are right now is the person we'll be for the rest of time. Hint: that's not the case. This talk was presented at an official TED conference, and was featured by our editors on the home page.

Related:  Chapter Four The Future is a foreign country • On Being Human • Inspiration

How Our Delusions Keep Us Sane: The Psychology of Our Essential Self-Enhancement Bias by Maria Popova How evolution made the average person believe she is better in every imaginable way than the average person. “Optimism is the faith that leads to achievement; nothing can be done without hope,” Helen Keller wrote in her 1903 treatise on optimism. But a positive outlook, it turns out, isn’t merely an intellectual disposition we don — it’s a deep-seated component of our evolutionary wiring and the product of powerful, necessary delusions our mind is working around-the-clock to maintain.

There's More to Life Than Being Happy - Emily Esfahani Smith "It is the very pursuit of happiness that thwarts happiness." In September 1942, Viktor Frankl, a prominent Jewish psychiatrist and neurologist in Vienna, was arrested and transported to a Nazi concentration camp with his wife and parents. Three years later, when his camp was liberated, most of his family, including his pregnant wife, had perished -- but he, prisoner number 119104, had lived. In his bestselling 1946 book, Man's Search for Meaning, which he wrote in nine days about his experiences in the camps, Frankl concluded that the difference between those who had lived and those who had died came down to one thing: Meaning, an insight he came to early in life. When he was a high school student, one of his science teachers declared to the class, "Life is nothing more than a combustion process, a process of oxidation."

"Don't wait for perfect." Brandon Stanton HONY Brandon Stanton has talked with 10,000 strangers and shared their stories with millions of people across the Internet. The 29-year-old photographer and creator of Humans of New York didn't hesitate to follow an idea and turn it into something meaningful. Stanton has photographed New Yorkers and visitors of the city since November 2010, developing one of the most dedicated online communities. Humans of New York (HONY) has nearly 1.5 million fans on Facebook, more than 33,000 followers on Twitter and regularly receives several thousand notes for each Tumblr post. The culmination of Stanton’s efforts is a book set for release on Oct. 15. The book, simply titled Humans of New York, is a compilation of Stanton’s best work, and also includes 75 never-before-seen portraits.

Mintzberg's 5Ps of Strategy - Strategy Skills Training From MindTools.com Developing a Better Strategy Learn about these five strategy definitions. © iStockphoto/kWaiGon What's your approach to developing strategy? Kierkegaard on Our Greatest Source of Unhappiness by Maria Popova Hope, memory, and how our chronic compulsion to flee from our own lives robs us of living. “How we spend our days is, of course, how we spend our lives,” Annie Dillard memorably wrote in reflecting on why presence matters more than productivity. “On how one orients himself to the moment depends the failure or fruitfulness of it,” Henry Miller asserted in his beautiful meditation on the art of living. And yet we spend our lives fleeing from the present moment, constantly occupying ourselves with overplanning the future or recoiling with anxiety over its impermanence, thus invariably robbing ourselves of the vibrancy of aliveness.

2015 Gates Annual Letter But we think the next 15 years will see major breakthroughs for most people in poor countries. They will be living longer and in better health. They will have unprecedented opportunities to get an education, eat nutritious food, and benefit from mobile banking. These breakthroughs will be driven by innovation in technology — ranging from new vaccines and hardier crops to much cheaper smartphones and tablets — and by innovations that help deliver those things to more people. The rich world will keep getting exciting new advances too, but the improvements in the lives of the poor will be far more fundamental — the basics of a healthy, productive life. It's great that more people in rich countries will be able to watch movies on super hi-resolution screens.

Why Do People Persist in Believing Things That Just Aren't True? Last month, Brendan Nyhan, a professor of political science at Dartmouth, published the results of a study that he and a team of pediatricians and political scientists had been working on for three years. They had followed a group of almost two thousand parents, all of whom had at least one child under the age of seventeen, to test a simple relationship: Could various pro-vaccination campaigns change parental attitudes toward vaccines? Each household received one of four messages: a leaflet from the Centers for Disease Control and Prevention stating that there had been no evidence linking the measles, mumps, and rubella (M.M.R.) vaccine and autism; a leaflet from the Vaccine Information Statement on the dangers of the diseases that the M.M.R. vaccine prevents; photographs of children who had suffered from the diseases; and a dramatic story from a Centers for Disease Control and Prevention about an infant who almost died of measles.

Meaning Is Healthier Than Happiness - Emily Esfahani Smith Health People who are happy but have little-to-no sense of meaning in their lives have the same gene expression patterns as people who are enduring chronic adversity. Please consider disabling it for our site, or supporting our work in one of these ways Google CFO retires with a candid memo about work/life balance "After nearly seven years as CFO, I will be retiring from Google to spend more time with my family." That's how Patrick Pichette, one of Google's highest-ranking executives, led his announcement on Tuesday that he'd be retiring from his role at the company. That line of reasoning has become something of a safe cliché among notable executives leaving their posts. But then Pichette did something unusual: He kept going, offering a candid explanation about the struggles of work/life balance at his level.