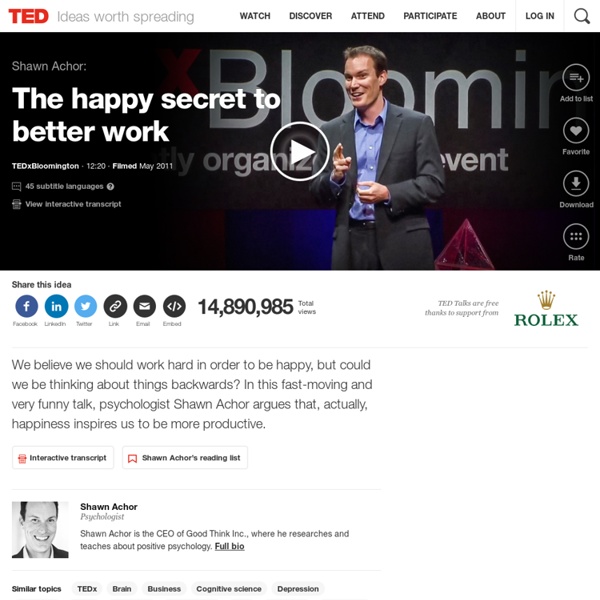 We believe that we should work to be happy, but could that be backwards? In this fast-moving and entertaining talk, psychologist Shawn Achor argues that actually happiness inspires productivity. (Filmed at TEDxBloomington.) This talk was presented to a local audience at TEDxBloomington, an independent event. TED editors featured it among our selections on the home page.

CNN Student News - February 17, 2016 Politics swirl around the notion of filling a late justice's seat on the U.S. Supreme Court. Oil-producing nations grapple with the prospect of changing their production plans. The Poetics of the Psyche: Adam Phillips on Why Psychoanalysis Is Like Literature and How Art Soothes the Soul by Maria Popova “Everybody is dealing with how much of their own aliveness they can bear and how much they need to anesthetize themselves.” “A writer is someone who pays attention to the world — a writer is a professional observer,” Susan Sontag once said. The object of the writer’s observation isn’t just the outer world but also — and perhaps even more so — the inner. In that regard, the writer bears a striking similarity to another professional observer — the psychotherapist.

Fixed vs. Growth: The Two Basic Mindsets That Shape Our Lives By Maria Popova “If you imagine less, less will be what you undoubtedly deserve,” Debbie Millman counseled in one of the best commencement speeches ever given, urging: “Do what you love, and don’t stop until you get what you love. Work as hard as you can, imagine immensities…” Far from Pollyanna platitude, this advice actually reflects what modern psychology knows about how belief systems about our own abilities and potential fuel our behavior and predict our success. Much of that understanding stems from the work of Stanford psychologist Carol Dweck, synthesized in her remarkably insightful Mindset: The New Psychology of Success (public library) — an inquiry into the power of our beliefs, both conscious and unconscious, and how changing even the simplest of them can have profound impact on nearly every aspect of our lives. One of the most basic beliefs we carry about ourselves, Dweck found in her research, has to do with how we view and inhabit what we consider to be our personality.

What makes a hero? - Matthew Winkler The Hero Archetype in Literature, Religion, and Popular Culture: (along with a useful PowerPoint presentation teachers can download at this URL: ) Maricopa Center for Learning and Instruction (users embark on their own hero's journey): An American Masters Lesson from PBS for Teachers on George Lucas, the Power of Myth, and the Hero's Journey: And an interactive approach to the Hero's Journey: And of course, information about Joseph Campbell's works on the subject, on the Joseph Campbell Foundation site:

The Science Of ‘Hangry’, Or Why Some People Get Grumpy When They’re Hungry Have you ever snapped angrily at someone when you were hungry? Or has someone snapped angrily at you when they were hungry? If so, you’ve experienced “hangry” (an amalgam of hungry and angry) – the phenomenon whereby some people get grumpy and short-tempered when they’re overdue for a feed. But where does hanger come from? And why is it that only some people seem to get hangry? The answer lies in some of the processes that happen inside your body when it needs food. How to Find Fulfilling Work By Maria Popova “If one wanted to crush and destroy a man entirely, to mete out to him the most terrible punishment,” wrote Dostoevsky, “all one would have to do would be to make him do work that was completely and utterly devoid of usefulness and meaning.” Indeed, the quest to avoid work and make a living of doing what you love is a constant conundrum of modern life. In How to Find Fulfilling Work (public library) — the latest installment in The School of Life’s wonderful series reclaiming the traditional self-help genre as intelligent, non-self-helpy, yet immensely helpful guides to modern living, which previously gave us Philippa Perry’s How to Stay Sane and Alain de Botton’s How to Think More About Sex — philosopher Roman Krznaric (remember him?) explores the roots of this contemporary quandary and guides us to its fruitful resolution: Never have so many people felt so unfulfilled in their career roles, and been so unsure what to do about it.

The science of willpower: Kelly McGonigal on sticking to resolutions It’s the second week in January and, at about this time, that resolution that seemed so reasonable a week ago — go to the gym every other day, read a book a week, only drink alcohol on weekends — is starting to seem very … hard. As you are teetering on the edge of abandoning it all together, Kelly McGonigal is here to help. This Stanford University psychologist — who shared last year how you can make stress your friend — wants you to know that you’re not having a hard time sticking to a resolution because you are a terrible person. Perhaps you’ve just formulated the wrong resolution.

What a difference a word can make People spend a good deal of time talking to one another, and in general we do it pretty well. We might feel excited, angry, embarrassed, or — if we’re lucky — loved, in the course of our daily conversations. So is there any benefit to thinking about a science of talk? Can we really gain anything from scientific analysis of something we “just do”? I believe we can, and I’ve spent the last 20 years studying real talk from real people talking to each other in real time. And while the linguist Noam Chomsky once described conversation as a “disorderly phenomenon,” I can tell you that it’s no such thing.

Kierkegaard on Our Greatest Source of Unhappiness by Maria Popova Hope, memory, and how our chronic compulsion to flee from our own lives robs us of living. “How we spend our days is, of course, how we spend our lives,” Annie Dillard memorably wrote in reflecting on why presence matters more than productivity. “On how one orients himself to the moment depends the failure or fruitfulness of it,” Henry Miller asserted in his beautiful meditation on the art of living. And yet we spend our lives fleeing from the present moment, constantly occupying ourselves with overplanning the future or recoiling with anxiety over its impermanence, thus invariably robbing ourselves of the vibrancy of aliveness. How Long It Takes to Form a New Habit by Maria Popova Why magic numbers always require a grain of empirical salt. “We are what we repeatedly do,” Aristotle proclaimed.

Thanksgiving-anglais From which city did the Mayflower depart? The Pilgrim Monument in Provincetown commemorates the Pilgrims' first landing in New England. How many days did it take for the Mayflower to reach the New World? How many people were there on board that ship? John Alden (a barrel-maker)and his wife. They had 10 children.