Do Not Despise Your Inner World: Advice on a Full Life from Philosopher Martha Nussbaum 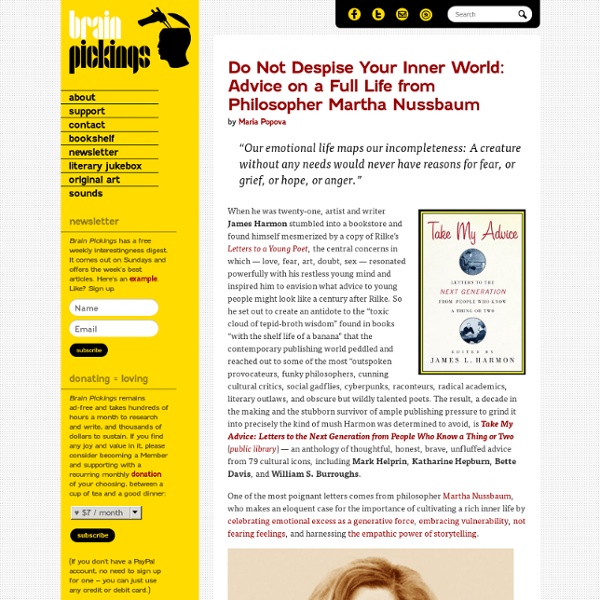 by Maria Popova “Our emotional life maps our incompleteness: A creature without any needs would never have reasons for fear, or grief, or hope, or anger.” When he was twenty-one, artist and writer James Harmon stumbled into a bookstore and found himself mesmerized by a copy of Rilke’s Letters to a Young Poet, the central concerns in which — love, fear, art, doubt, sex — resonated powerfully with his restless young mind and inspired him to envision what advice to young people might look like a century after Rilke. So he set out to create an antidote to the “toxic cloud of tepid-broth wisdom” found in books “with the shelf life of a banana” that the contemporary publishing world peddled and reached out to some of the most “outspoken provocateurs, funky philosophers, cunning cultural critics, social gadflies, cyberpunks, raconteurs, radical academics, literary outlaws, and obscure but wildly talented poets. Do not despise your inner world. Donating = Loving Share on Tumblr

The video that changed everything I thought I know about non-attachement. {Video} The Heart of Non-Attachment True non-attachment is an intimacy with life. Buddhist teacher and yogi Michael Stone shares his perspective on how to live an engaged life. The 7 Natural Laws of the Universe « Path to Enlightenment The 7 Natural Laws of the Universe The Law of Attraction is just part of one of the 7 natural laws of the Universe: the Law of Vibration. Of the 7 Laws, it may be the most important in how our everyday lives play out, but all of the laws are in effect whether we are aware of them or not. Knowing what the 7 laws are and how they work can make a significant difference in applying them to create the life you truly desire. Whitman Illuminated: “Song of Myself,” in Breathtaking Illustrations by Artist Allen Crawford by Maria Popova “He exalted the nature around and within us. His work is an expression of primal joy: He celebrated our animal senses, and the pleasures of being alive.” Visual artists have long been drawn to the literary classics, producing such masterful homages as William Blake’s paintings for Milton’s Paradise Lost and for Dante’s Divine Comedy, Picasso’s drawings for a naughty ancient Greek comedy, Matisse’s etchings for Ulysses, John Vernon Lord’s illustrations for Joyce’s Finnegans Wake and Salvador Dalí’s prolific illustrations for Don Quixote in 1946, the essays of Montaigne in 1947, The Divine Comedy in 1957, Alice in Wonderland in 1969, and Romeo and Juliet in 1975.

There's More to Life Than Being Happy Shutterstock "It is the very pursuit of happiness that thwarts happiness." In September 1942, Viktor Frankl, a prominent Jewish psychiatrist and neurologist in Vienna, was arrested and transported to a Nazi concentration camp with his wife and parents. Sam Harris on Spirituality without Religion, Happiness, and How to Cultivate the Art of Presence by Maria Popova “Our world is dangerously riven by religious doctrines that all educated people should condemn, and yet there is more to understanding the human condition than science and secular culture generally admit.” Nietzsche’s famous proclamation that “God is dead” is among modern history’s most oft-cited aphorisms, and yet as is often the case with its ilk, such quotations often miss the broader context in a way that bespeaks the lazy reductionism with which we tend to approach questions of spirituality today. Nietzsche himself clarified the full dimension of his statement six years later, in a passage from The Twilight of Idols, where he explained that “God” simply signified the supersensory realm, or “true world,” and wrote: “We have abolished the true world. What has remained?

Helen Keller on Optimism by Maria Popova “Doubt and mistrust are the mere panic of timid imagination, which the steadfast heart will conquer, and the large mind transcend.” Decades before the dawn of the positive psychology movement and a century before what neuroscience has taught us about the benefits of optimism, Helen Keller — the remarkable woman who grew up without sight and hearing until, with the help of her teacher Annie Sullivan, she learned to speak, read, write, and inhabit the life of the mind with such grace and fierceness that made her one of history’s most inspired intellectual heroes — penned a timeless treatise on optimism as a philosophy of life. Simply titled Optimism (public library; public domain), it was originally published in 1903 and written — a moment of pause here — after Keller learned to write on a grooved board over a sheet of paper, using the grooves and the end of her index pencil to guide her writing. Once I knew only darkness and stillness. Now I know hope and joy.

7 Body Language Tricks To Make Anyone Instantly Like You There’s no question that body language is important. And, according to Leil Lowndes in her book “How To Talk To Anyone,” you can capture — and hold — anyone’s attention without even saying a word. We’ve selected the best body language techniques from the book and shared them below: My Teacher Is a Monster: A Sweet Modern Fable About Seeing Through the Othern... by Maria Popova A gentle illustrated reminder that we can’t love what we don’t know. “Love,” wrote Leo Tolstoy in his poignant letters to Gandhi on why we hurt one another, “represents the highest and indeed the only law of life, as every man knows and feels in the depths of his heart (and as we see most clearly in children)…” Tolstoy believed that if only we managed to see through our superficial differences and our fear of the other’s otherness, we’d recognize instantly the universe’s basic “law of love” — something to which we are born attuned, only to forget as we enter adulthood. Kids, of course, can often be especially cruel in their inability to accept otherness — but that’s why it’s especially enchanting to witness, let alone spark, the precise moment in which a child lets go of some learned bias and sees in another person his or her intrinsic goodness, a return to innocence and Tolstoy’s “law of love.” Suddenly, the leisurely environment strips them of their weekday roles.