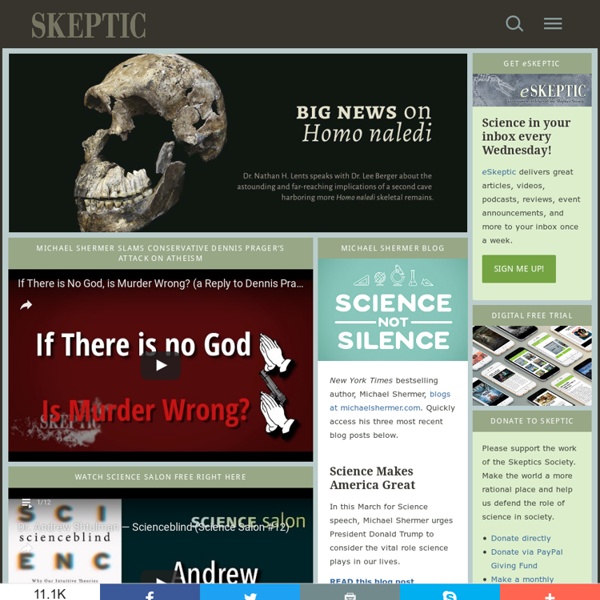 SkepticBlog is a collaboration among some of the most recognized names in promoting science, critical thinking, and skepticism including. Regular bloggers include: Daniel Loxton, Donald Prothero, Mark Edward, Michael Shermer, and Steven Novella. Gimme that new-time religion! A review of Dr. Karen Stollznow's excellent summary of America's bizarre religions, "God Bless America" READ the post

Post-Modern Science: The Illusion of Consciousness Sees Through Itself    We have always struggled with the limits to how human language can express our thoughts about reality. But post-modern science dismisses the struggle as futile: We did not evolve to perceive reality. That conviction is changing cosmology dramatically. We know almost nothing about the human consciousness but naturalism must treat it as evolved from unconscious elements. 15 Years of Cutting-Edge Thinking on Understanding the Mind by Maria Popova What mirror neurons have to do with Abu Ghraib, the science of religion, and how happiness flourishes. For the past 15 years, literary-agent-turned-crusader-of-human-progress John Brockman has been a remarkable curator of curiosity, long before either “curator” or “curiosity” was a frivolously tossed around buzzword. His Edge.org has become an epicenter of bleeding-edge insight across science, technology and beyond, hosting conversations with some of our era’s greatest thinkers (and, once a year, asking them some big questions.) Last month marked the release of The Mind, the first volume in The Best of Edge Series, presenting eighteen provocative, landmark pieces — essays, interviews, transcribed talks — from the Edge archive.

Philosophical Debates How do you feel about debates? What are discussions? Why bother? Better yet, let's rewind and start over. NeuroTribes "The Structure of Flame" by autistic artist Jessica Park. Courtesy of Pure Vision Arts: In 2007, the United Nations passed a resolution declaring April 2 World Autism Awareness Day — an annual opportunity for fundraising organizations to bring public attention to a condition considered rare just a decade ago. Now society is coming to understand that the broad spectrum of autism — as it’s currently defined, which will change next year with the publication of the DSM-5 – isn’t rare after all. In fact, “autism is common,” said Thomas Frieden, Director of the U.S.

Portland State Sociology of Islam & Muslim Societies The Sociology of Islam and Muslim Societies Newsletter: Winter 2011 Newsletter No. 7 - ISSN:1942-7948 Contents Social and Political Transformations in the Middle East - Umit Kurt and Oguz Alyanak The Political Economy of Turkey’s Response to the Arab Spring - Altay Atli Footsteps of Revolution in the Land of Queen Sheba - Bezen Balamir Coskun Two Sides of the Same Coin; Conflicting Views of Islamism in Pakistan - Jeanette Bailey Egypt and the "Arab Spring": Notes on Facts and Challenges - Moises Garduño García The Arab Spring and the Turkish Model - Alper Y.