Pope Francis Calls for Action on Climate Change & Capitalism as Planet "Exploited by Human Greed" Action Center. 350.org. Donate to Sandy relief—and make polluters pay too. Too late to stop global warming by cutting emissions: Scientists argue for adaption policies. Governments and institutions should focus on developing adaption policies to address and mitigate against the negative impact of global warming, rather than putting the emphasis on carbon trading and capping greenhouse-gas emissions, argue Johannesburg-based Wits University geoscientist Dr Jasper Knight and Dr Stephan Harrison from the University of Exeter in the United Kingdom. 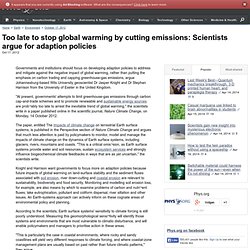 "At present, governments' attempts to limit greenhouse-gas emissions through carbon cap-and-trade schemes and to promote renewable and sustainable energy sources are prob¬ably too late to arrest the inevitable trend of global warming," the scientists write in a paper published online in the scientific journal, Nature Climate Change, on Monday, 14 October 2012. According to the scientists, Earth surface systems' sensitivity to climate forcing is still poorly understood. Explore further: MEPs back plans to slash use of plastic shopping bags. KY Bike Rides - Cue Sheets and Maps. List of rides - Critical Mass. 2012 Disaster Prevention. So what do you know about the Mayan Calendar and the 2012 Prophecies? 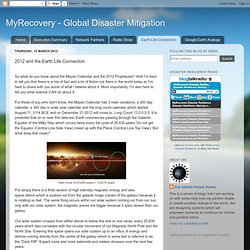 Well I'm here to tell you that there is a mix of fact and a lot of fiction out there in the world today so I'm here to share with you some of what I believe about it. More importantly, I'm also here to tell you what science CAN do about it. For those of you who don't know, the Mayan Calendar has 3 main variations, a 260 day calendar, a 365 day or solar year calendar and the long count calendar which started August 11, 3114 BCE and on December 21 2012 will move to, Long Count 13.0.0.0.0.

It is predicted that on or near this date we, Earth commences passing through the Galactic Equator of the Milky Way which occurs twice every full cycle of 25,630 years. Early Warning & Prevention Mind Map. Global Disaster Mitigation. Our Infinite Future Series Part Two: Global Disaster Mitigation - Importance of Global Coherence Complete Destruction or Massive Positive Change. 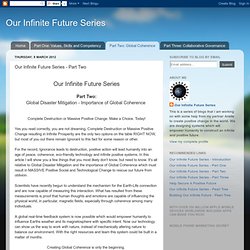 Make a Choice. MyRecovery - Executive Summary. Identify The Need:As another year comes to a close and the sun rises on the year 2012 A.D. humanity is licking its wounds and moving gingerly forward with a slight uncertainty as to what to expect. 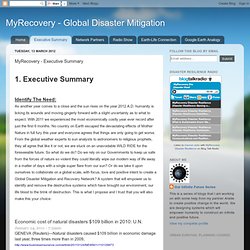 With 2011 we experienced the most economically costly year ever record after just the first 6 months. No country on Earth escaped the devastating effects of Mother Nature in full fury this year and everyone agrees that things are only going to get worse. From the global weather experts to sun analysts to astronomers to religious prophets, they all agree that like it or not, we are stuck on an unavoidable WILD RIDE for the foreseeable future. So what do we do? Do we rely on our Governments to keep us safe from the forces of nature so violent they could literally wipe our modern way of life away in a matter of days with a single super flare from our sun? Establish The Way Forward:Modern technology has gifted us an unprecedented opportunity to change our trajectory in almost an instant. Green Housing. Santa Fe IV Plan. Santa Fe IV Sven Alstrom, Designer South Elevation This one story Santa Fe Style Guest House is based upon 24-inch wide straw bale construction or adobe block on concrete foundation & footings with crawl spaces. 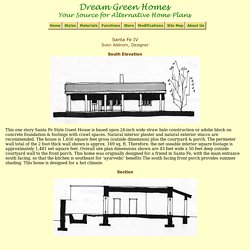 Natural interior plaster and natural exterior stucco are recommended. The house is 1,650 square feet gross (outside dimension) plus the courtyard & porch. The perimeter wall total of the 2 foot thick wall shown is approx. 169 sq, ft, Therefore, the net useable interior square footage is approximately 1,481 net square feet. Section Floor Plan The open kitchen may seat eight and is shown with a work table next to the entry. Here is a quote from one of Sven's many satisfied customers: "Sven worked within the design times that he initially gave us, worked well with other design people, helped us negotiate a contract with the general contractor, and was very active in recommendations for purchased items and appliances. 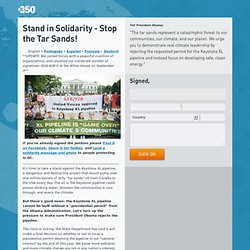 At the White House on September 3** If you've already signed the petition please Post it on Facebook, Share It On Twitter, and send a solidarity message and photo to people protesting in DC. It's time to take a stand against the Keystone XL pipeline, a dangerous and destructive project that would pump over one million barrels of dirty "tar sands" oil from Canada to the USA every day. The oil in the Keystone pipeline could poison drinking water, threaten the communities it runs through, and wreck the climate. But there's good news: the Keystone XL pipeline cannot be built without a "presidential permit" from the Obama Administration. A day to move beyond fossil fuels. StopGlobalWarming.org. Tech Planet Journal. Friends of the Earth.