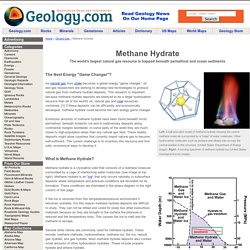 As natural gas from shale becomes a global energy "game changer," oil and gas researchers are working to develop new technologies to produce natural gas from methane hydrate deposits. This research is important because methane hydrate deposits are believed to be a larger hydrocarbon resource than all of the world's oil, natural gas and coal resources combined. [1] If these deposits can be efficiently and economically developed, methane hydrate could become the next energy game changer. Enormous amounts of methane hydrate have been found beneath Arctic permafrost, beneath Antarctic ice and in sedimentary deposits along continental margins worldwide. In some parts of the world they are much closer to high-population areas than any natural gas field. These nearby deposits might allow countries that currently import natural gas to become self-sufficient. New tool for measuring frozen gas in ocean floor sediments.

A collaboration between the National Oceanography Centre (NOC) and the University of Southampton is to develop an instrument capable of simulating the high pressures and low temperatures needed to create hydrate in sediment samples. 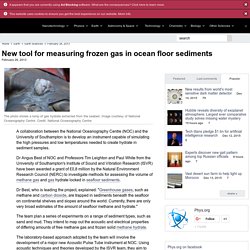 Dr Angus Best of NOC and Professors Tim Leighton and Paul White from the University of Southampton's Institute of Sound and Vibration Research (ISVR) have been awarded a grant of £0,8 million by the Natural Environment Research Council (NERC) to investigate methods for assessing the volume of methane gas and gas hydrate locked in seafloor sediments. Dr Best, who is leading the project, explained: "Greenhouse gases, such as methane and carbon dioxide, are trapped in sediments beneath the seafloor on continental shelves and slopes around the world.

Methane Hydrate. Methane hydrate is a cage-like lattice of ice inside of which are trapped molecules of methane, the chief constituent of natural gas. 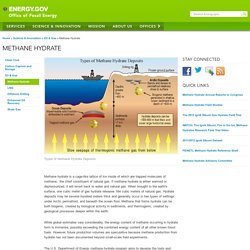 If methane hydrate is either warmed or depressurized, it will revert back to water and natural gas. When brought to the earth's surface, one cubic meter of gas hydrate releases 164 cubic meters of natural gas. Hydrate deposits may be several hundred meters thick and generally occur in two types of settings: under Arctic permafrost, and beneath the ocean floor. Methane that forms hydrate can be both biogenic, created by biological activity in sediments, and thermogenic, created by geological processes deeper within the earth. Japan becomes first nation to extract 'frozen gas' from seabed. Japan has successfully extracted natural gas from frozen methane hydrate deposits under the sea, in the first example of production of the gas offshore, officials said on Tuesday. 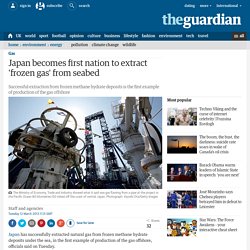 The Ministry of Economy, Trade and Industry showed what it said was gas flaming from a pipe at the project in the Pacific Ocean 80 kilometres (50 miles) off the coast of central Japan. Japan's 'frozen gas' reserves are worthless if we take climate change seriously. There's only one way of knowing whether or not governments are serious about climate change: have they decided to leave most of their fossil fuel reserves in the ground? 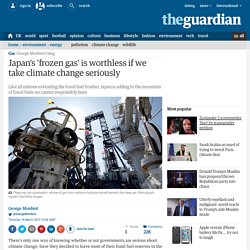 We have already discovered far more carbon than we can afford to burn, if we are not to commit the world to very dangerous levels of heating. Only if most of it – four-fifths according to a detailed estimate – is left where it sits is there a good chance of preventing more than2C of global warming. Forgive me if you've heard me say this many times before. But it is the only point that is really worth making. It doesn't matter how many wind turbines you build, or energy-saving lightbulbs you install, or more economical cars you manufacture: unless most of our fossil fuel reserves are declared off-limits they will, sooner or later, be extracted and burned.

Japan to Begin Test Production for Frozen Gas Locked in Seabed. Japan , which has almost no natural energy resources of its own, will begin the world’s first offshore drilling operation this week to extract frozen natural gas locked under the seabed. 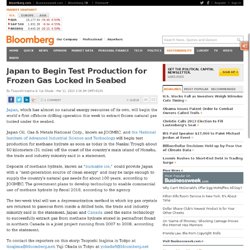 Japan Oil, Gas & Metals National Corp., known as JOGMEC, and the National Institute of Advanced Industrial Science and Technology will begin test production for methane hydrate as soon as today in the Nankai Trough about 50 kilometers (31 miles) off the coast of the country’s main island of Honshu, the trade and industry ministry said in a statement. Deposits of methane hydrate, known as “ burnable ice ,” could provide Japan with a “next-generation source of clean energy” and may be large enough to supply the country’s natural gas needs for about 100 years, according to JOGMEC.

The government plans to develop technology to enable commercial use of methane hydrate by fiscal 2018, according to the agency. To contact the editor responsible for this story: Jason Rogers at jrogers73@bloomberg.net. Methane Hydrates and Contemporary Climate Change. Methane Hydrates and the Future of Natural Gas. Climate-changing methane 'rapidly destabilizing' off East Coast, study finds. In this visualization, the Gulf Stream is seen as the dark red current coming into the Atlantic from the Gulf of Mexico. 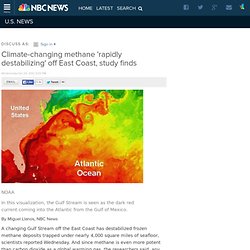 By Miguel Llanos, NBC News A changing Gulf Stream off the East Coast has destabilized frozen methane deposits trapped under nearly 4,000 square miles of seafloor, scientists reported Wednesday. And since methane is even more potent than carbon dioxide as a global warming gas, the researchers said, any large-scale release could have significant climate impacts.