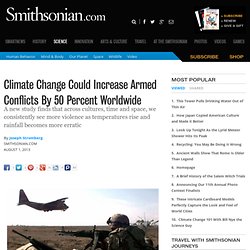 Image via Flickr user expertinfantry Climate change isn’t just affecting the natural world. Miami, the great world city, is drowning while the powers that be look away. A drive through the sticky Florida heat into Alton Road in Miami Beach can be an unexpectedly awkward business. 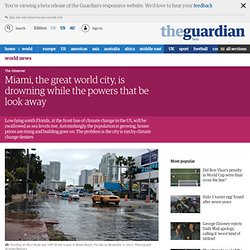 Most of the boulevard, which runs north through the heart of the resort's most opulent palm-fringed real estate, has been reduced to a single lane that is hemmed in by bollards, road-closed signs, diggers, trucks, workmen, stacks of giant concrete cylinders and mounds of grey, foul-smelling earth. It is an unedifying experience but an illuminating one – for this once glamorous thoroughfare, a few blocks from Miami Beach's art deco waterfront and its white beaches, has taken on an unexpected role. It now lies on the front line of America's battle against climate change and the rise in sea levels that it has triggered. World Breaks Monthly Heat Record 2 Times in a Row. WASHINGTON — The globe is on a hot streak, setting a heat record in June. 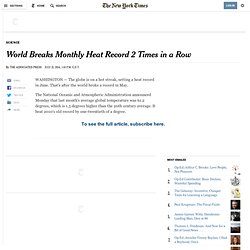 That's after the world broke a record in May. The National Oceanic and Atmospheric Administration announced Monday that last month's average global temperature was 61.2 degrees, which is 1.3 degrees higher than the 20th century average. New Evidence: Climate Change Is Disrupting U.S. Military Operations. Funny, the headline says it IS disrupting operations, yet the article says the military is identifying POTENTIAL phenomena that COULD disrupt operations. 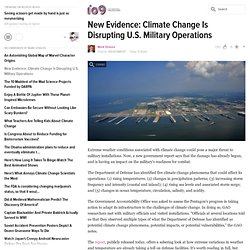 That's pretty goddamn misleading, if you ask me. Why can't climate change articles just be honest instead of coercive? "The combination of thawing permafrost, decreasing sea ice, and rising sea level on the Alaskan coast have led to an increase in coastal erosion at several Air Force radar early warning and communication installations. According to installation officials, this erosion has damaged roads, utility infrastructure, seawalls, and runways…..As a result, only small planes or helicopters are able to land in this location, as opposed to larger planes that could land on the runway when it is fully functional.

" "Officials at an installation in the Pacific told us that in 2008 they experienced 43 straight days of rain that resulted in mud slides and flooding that damaged base infrastructure, including base housing. " Another Hurricane, Another Scary New Record. Will 2014 Be the Hottest Year on Record? We're hearing more and more about our pending global El Niño. 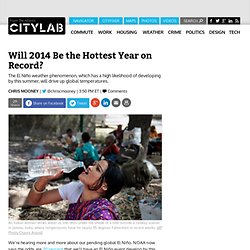 NOAA now says the odds are 70 percent that we'll have an El Niño event develop by this summer, and even higher after that. Other experts put the odds higher still. What's more, the ocean and atmosphere have recently been behaving in a rather El Niño-like manner: Record-breaking Hurricane Amanda recently formed in the northeastern Pacific basin, which tends to be a very active hurricane region in El Niño years. El Niño, if it develops, will upend everybody's weather—but it may also have another impact: Driving up global temperatures. Insurer's Message: Prepare for Climate Change or Get Sued. To insurance companies, there’s no doubt that climate change is here: They are beginning to file lawsuits against small towns and cities who they say haven’t prepared for the floods and storms that will cost the companies billions in payments. 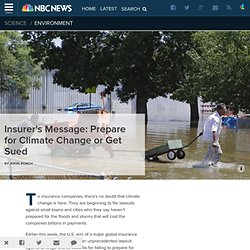 Earlier this week, the U.S. arm of a major global insurance company backed away from an unprecedented lawsuit against Chicago and its suburbs for failing to prepare for heavy rains and associated flooding it claimed were fueled by global warming. While legal experts said the case was a longshot, its withdrawal didn't alter the message it contained for governments: prepare now for climate change or pay the price. After several days of ground-saturating rain last April, an early-morning train of intense storm cells passed over the greater Chicago area and overwhelmed the region's stormwater and sewage systems. In Norfolk, evidence of climate change is in the streets at high tide. “We don’t like being the poster child for climate change,” said the Rev. 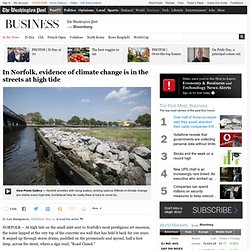 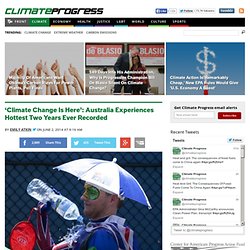 CREDIT: AP Photo/Joshua Baker The last two years in Australia have been the hottest ever recorded, and there’s no sign that the heat wave is going to stop any time soon, a report released Sunday showed. According to data compiled by Australia’s biggest crowd-funding campaign, the independent Climate Council, the period from May 2012 to April 2014 was the hottest 24-month period ever recorded in Australia. 2013 was sixth warmest year on record, UN says. 2013 was the sixth warmest year since records began more than 160 years ago, tying with 2007, the UN's weather agency said on Wednesday. 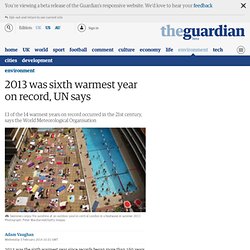 The World Metereological Organisation analysed the three main global records of surface temperatures, from the UK's Met Office and the National Oceanic and Atmospheric Administration and NASA in the US, and said last year was 0.5C above the 1961-1990 average. 2010 was the warmest year on record, and 13 of the 14 warmest years on record have occurred in the 21st century. Some parts of the globe were exceptionally hot in 2013, however – Australia experienced its warmest year ever. Al Gore: 'extreme weather has made people wake up to climate change' Extreme weather events including typhoon Haiyan and superstorm Sandy are proving a "gamechanger" for public awareness of the threat posed by climate change, Al Gore said on Friday. 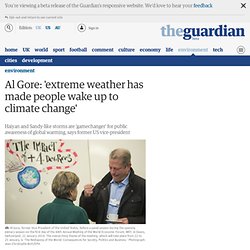 The former US vice-president, speaking to delegates at the World Economic Forum in Davos, said: "I think that these extreme weather events which are now a hundred times more common than 30 years ago are really waking people's awareness all over the world [on climate change], and I think that is a gamechanger. It comes about, of course, because we continue to put 90 million tonnes of global warming pollution into the atmosphere every day, as if it's an open sewer. " But he said the falling price of solar and wind power gave hope for efforts to tackle climate change. Climate change described visually. Natural disasters? At least since Noah, and likely long before, we've stared in horror at catastrophe and tried to suss out deeper meaning – it was but weeks ago that the Tokyo governor, Shintaro Ishihara, declared that the earthquake/tsunami/ reactor tripleheader was "divine punishment" for excess consumerism.

This line of reasoning usually fails to persuade these days (why are Las Vegas and Dubai unscathed by anything except the housing meltdown?) But it's persistent. We need some explanation for why our stable world is suddenly cracked in half or under water. Still, over time we've become less superstitious, since science can explain these cataclysms. Angry gods or plate tectonics? Which is odd, because the physical world is moving in the other direction. The Holocene – the 10,000 years through which we have just come – was by all accounts a period of calm and stability on Earth.

In a sense Ishihara was correct when he decried "selfish greed". The World Bank - Climate Change - Climate Change Report Warns of Dramatically Warmer World This Century. CIA Says Global-Warming Intelligence Is ‘Classified’ Two years ago, the Central Intelligence Agency announced it was creating a center to analyze the geopolitical ramifications of “phenomena such as desertification, rising sea levels, population shifts and heightened competition for natural resources.” But whatever work the Center on Climate Change and National Security has done remains secret.

In response to National Security Archive scholar Jeffrey Richelson‘s Freedom of Information Act request, the CIA said all of its work is “classified.” “We completed a thorough search for records responsive to your request and located material that we determined is currently and properly classified and must be denied in its entirety,” (.pdf) Susan Viscuso, the agency’s information and privacy coordinator, wrote Richelson. Climate change: The heat is on.

10 Signs Climate Change Is Already Happening. Are we falling off the climate precipice? I grew up planning for my future, wondering which college I would attend, what to study, and later on, where to work, which articles to write, what my next book might be, how to pay a mortgage, and which mountaineering trip I might like to take next. Now, I wonder about the future of our planet. During a recent visit with my eight-year-old niece and 10- and 12-year-old nephews, I stopped myself from asking them what they wanted to do when they grew up, or any of the future-oriented questions I used to ask myself. I did so because the reality of their generation may be that questions like where they will work could be replaced by: Where will they get their fresh water? What food will be available?