Millions of Climate Refugees Have Already Lost Their Homes. The Future of the Earth Will Be Decided This Week. A Weird Side-Effect Of the Wildfire Surge Is Putting 65 Million Acres of Forest At Risk. Arctic methane release. Time series of atmospheric methane concentration (1984-2005) Arctic methane release is the release of methane from seas and soils in permafrost regions of the Arctic. 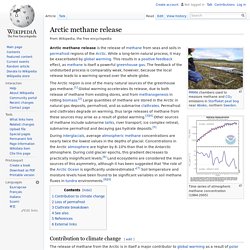 While a long-term natural process, it may be exacerbated by global warming. This results in a positive feedback effect, as methane is itself a powerful greenhouse gas. Warming Waters May Be Releasing Giant Plumes of Methane Off the U.S. West Coast. Suitable Days for Plant Growth Disappear under Projected Climate Change: Potential Human and Biotic Vulnerability. 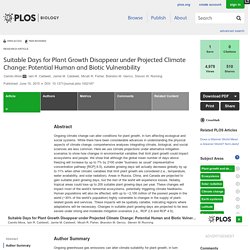 While there have been considerable advances in understanding the physical aspects of climate change, comprehensive analyses integrating climate, biological, and social sciences are less common. Here we use climate projections under alternative mitigation scenarios to show how changes in environmental variables that limit plant growth could impact ecosystems and people.

We show that although the global mean number of days above freezing will increase by up to 7% by 2100 under “business as usual” (representative concentration pathway [RCP] 8.5), suitable growing days will actually decrease globally by up to 11% when other climatic variables that limit plant growth are considered (i.e., temperature, water availability, and solar radiation). Author Summary Academic Editor: Georgina M. Received: July 28, 2014; Accepted: April 30, 2015; Published: June 10, 2015 Introduction. Which Countries Are Most Likely to Be Wiped Out By Future Disasters? Climate Change Could Cut Global Food Output 18% By 2050. The nine planetary boundaries. Fires in Indonesia are Emitting More Carbon Than All Americans Combined. Earth's Oceans Could Look Completely Different by the End of the Century. A Massive Bleaching Event is Threatening the World’s Coral Reefs. Everything You Need to Know About Obama's Clean Energy Plan.

Obama Just Unveiled the Most Ambitious Climate Change Plan Ever by a US President. On Monday, President Barack Obama unveiled a new plan that could ultimately surpass even the Affordable Care Act as his most significant domestic achievement. 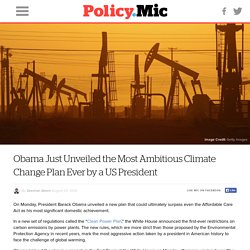 New Research Suggests Climate Change is Wiping Out Bumblebees. Science AMA Series: Climate change is a medical emergency: but what can be done about it? The Lancet Commission on Public Health and Climate here to talk about managing health effects of climate change. Ask us anything! : science. Obama’s U.S.-China climate agreement: Carbon budget and exponential curves show why this is a fair deal. Photo by Feng Li/Getty Images The big climate news of last week, indeed maybe of the past several years, was the surprise announcement of a bilateral U.S. 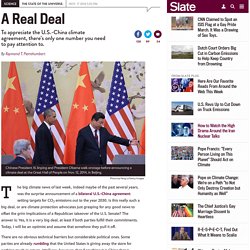 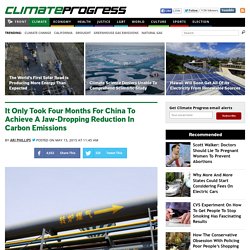 Climate Denialists In Congress Acting As NASA's Kryptonite : 13.7: Cosmos And Culture. The Gulf of Aden and the Horn of Africa as seen from the International Space Station. 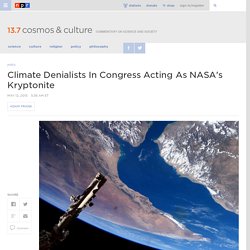 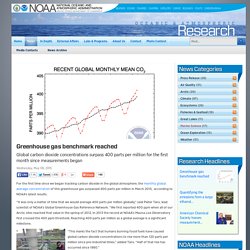 “It was only a matter of time that we would average 400 parts per million globally,” said Pieter Tans, lead scientist of NOAA’s Global Greenhouse Gas Reference Network. “We first reported 400 ppm when all of our Arctic sites reached that value in the spring of 2012. In 2013 the record at NOAA’s Mauna Loa Observatory first crossed the 400 ppm threshold. Reaching 400 parts per million as a global average is a significant milestone.

Measuring greenhouse gases. ImGoingToMakeYouMad comments on The biggest extinction event in planetary history was driven by the rapid acidification of our oceans, a new study concludes. So much carbon was released into the atmosphere, and the oceans absorbed so much of it so quickly. Climate change threatens national security, Pentagon says. A snow-covered C-130 Hercules sits on the flightline at Yokota Air Base, Japan, during a snowstorm, Feb. 8, 2014. 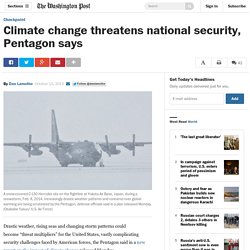 Increasingly drastic weather patterns and concerns over global warming are being scrutinized by the Pentagon, defense officials said in a plan released Monday. (Osakabe Yasuo/ U.S. Air Force) Drastic weather, rising seas and changing storm patterns could become “threat multipliers” for the United States, vastly complicating security challenges faced by American forces, the Pentagon said in a new report on the impact of climate change released Monday. Scientists now know why global warming has slowed down and it’s not good news for us. It’s been called the “hiatus,” “pause,” or “slowdown” and has been a favored meme of climate skeptics for years. 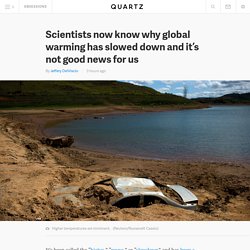 Despite the continued increase of greenhouse gas emissions from us, rise of global surface temperatures has been easing since 1998. Two new studies published this week examine the origins of the“pause,” and, surprisingly, suggest that it may persist for years even in our notably warming world. The first study, published on Feb. 26 in the journal Science, looked into likely causes.

Humanity is in the existential danger zone, study confirms. The Earth’s climate has always changed. 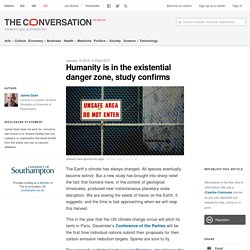 All species eventually become extinct. But a new study has brought into sharp relief the fact that humans have, in the context of geological timescales, produced near instantaneous planetary-scale disruption. Report: Earth's Fossil Fuel Reserves Need To Stay In The Ground. Also because I refuse to get involved in a bad comment thread, I'm going to fact check it here. a study done by sustainable resources people Since OP doesn't know these people (I assume), OP is referring to them as "sustainable resources people" because they work at University College London's Institute for Sustainable Resources, and then concludes that their results are biased because of where they work. Which is similar to arguing that doctors are hospital people and that we, the common folk, should be wary of results reached by doctors when they argue that hospitals are good.

Those hospital people are probably just talking on behalf of Big Hospital! The energiewende in Germany has lead to them building coal-fired power plants to make up for the unreliable renewable wind and solar. This is a statement based on false claims, please see this for an analysis on how this is wrong. The Pentagon's New Climate Change Report Won't Change A Damn Thing. Recommended by Mark Strauss. Drought helped cause Syria’s war. Will climate change bring more like it? Francesco Femia and Caitlin Werrell are co-founders of the D.C. -based Center for Climate and Security, a think tank focused on the interactions between climate change and security issues. In recent years, they've published a number of reports looking at the environmental roots of both the Arab Spring and the ongoing civil war in Syria.

Global Warming Imperils Nation's Energy System. Global warming is bringing more weather and climate extremes, which will impact U.S. energy security in ways that have not been adequately considered. The National Wildlife Federation’s report, More Extreme Weather and the U.S. Energy Infrastructure, details how more severe droughts, more intense tropical storms, and heavier rainfall events could cause major disruptions in the existing systems that deliver energy to the nation, even as these existing energy systems are already beginning to crumble. Future investments must transform the U.S. energy infrastructure to be resilient in the face of more extreme weather and climate. We recommend that the nation undertake a detailed national climate vulnerability assessment for the energy industry and develop climate adaptation plans to address vulnerabilities. Some ways that the U.S. energy infrastructure is vulnerable to extreme weather include:

(Screenshot) The Red Cross will have prime real estate atop Facebook users’ news feeds through Friday in the United States. Welcome to the Age of the Superstorm.