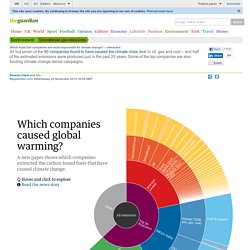 Nicholas Stern: 'I got it wrong on climate change – it's far, far worse' Lord Stern, author of the government-commissioned review on climate change that became the reference work for politicians and green campaigners, now says he underestimated the risks, and should have been more "blunt" about the threat posed to the economy by rising temperatures. 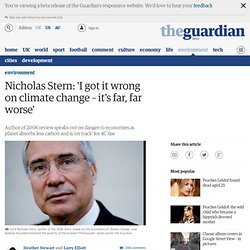 In an interview at the World Economic Forum in Davos, Stern, who is now a crossbench peer, said: "Looking back, I underestimated the risks. The planet and the atmosphere seem to be absorbing less carbon than we expected, and emissions are rising pretty strongly. The History of Climate Change Negotiations in 83 seconds. Data.GISS: GISS Surface Temperature Analysis. Global Warming: An Exclusive Look at James Hansen’s Scary New Math. How can NASA physicist and climatologist James E. 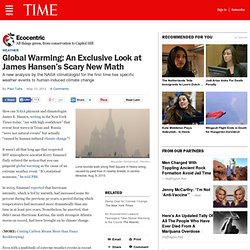 Hansen, writing in the New York Times today, “say with high confidence” that recent heat waves in Texas and Russia “were not natural events” but actually “caused by human-induced climate change”? It wasn’t all that long ago that respected MIT atmospheric scientist Kerry Emanuel flatly refuted the notion that you can pinpoint global warming as the cause of an extreme weather event. “It’s statistical nonsense,” he told PBS. In 2005, Emanuel reported that hurricane intensity, which is fed by warmth, had increased some 80 percent during the previous 50 years, a period during which temperatures had increased more dramatically than any time in at least 500 years. 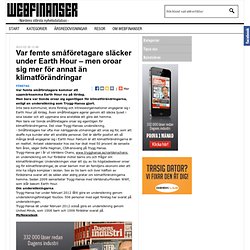 U.K. to mandate CO2 reporting for largest corporations. The U.K. government today confirmed that it will introduce mandatory carbon reporting rules requiring around 1,800 of the country's largest listed companies to report annually on their greenhouse gas emissions. 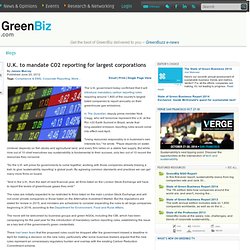 In The Guardian, deputy prime minister Nick Clegg, who will tomorrow represent the U.K. at the Rio +20 Earth Summit in Brazil, wrote that long-awaited emission reporting rules would come into effect next April. No Bail-Out for the Planet. Why is it so easy to save the banks, but so hard to save the biosphere? 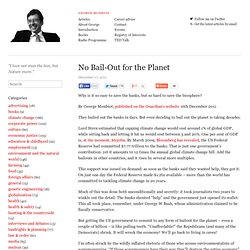 By George Monbiot, published on the Guardian’s website 16th December 2011 They bailed out the banks in days. But even deciding to bail out the planet is taking decades. Lord Stern estimated that capping climate change would cost around 1% of global GDP, while sitting back and letting it hit us would cost between 5 and 20%. One per cent of GDP is, at the moment, $630bn. Så klimatbromsar svenska direktörer. p091101-The-one-degree-war-plan. Climate deal salvaged after marathon talks in Durban. Countries have agreed a deal in Durban to push for a new climate treaty, salvaging the latest round of United Nations climate talks from the brink of collapse. 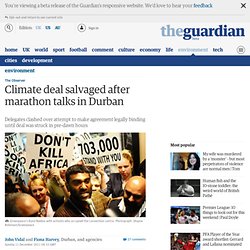 The UK's cimate change secretary, Chris Huhne, hailed the deal, finally struck in the early hours of Sunday after talks had overrun by a day and a half, as a "significant step forward" that would deliver a global, overarching legal agreement to cut emissions. He said it sent a strong signal to businesses and investors about moving to a low-carbon economy. But environmental groups said negotiators had failed to show the ambition necessary to cut emissions by levels that would limit global temperature rises to no more than 2C and avoid "dangerous" climate change.

Cost of extra year's climate inaction $500 billion: IEA. World headed for irreversible climate change in five years, IEA warns. The world is likely to build so many fossil-fuelled power stations, energy-guzzling factories and inefficient buildings in the next five years that it will become impossible to hold global warming to safe levels, and the last chance of combating dangerous climate change will be "lost for ever", according to the most thorough analysis yet of world energy infrastructure. 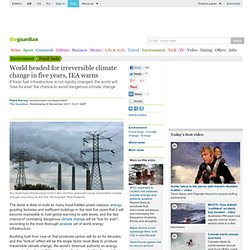 Anything built from now on that produces carbon will do so for decades, and this "lock-in" effect will be the single factor most likely to produce irreversible climate change, the world's foremost authority on energy economics has found. If this is not rapidly changed within the next five years, the results are likely to be disastrous. Global economy gets dirtier for first time in a decade: it's no time to panic.

With energy prices rising, turning household bills into political kryptonite and making the debate ever more fierce, it's worth reminding ourselves what this is all about. 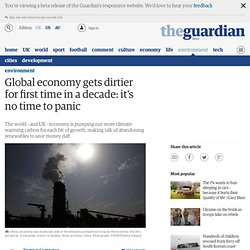 It is, first and foremost, about cutting the emissions of greenhouse gases that are dangerously warming our planet down to a level deemed "safe". This is not an optional extra in the energy debate. If you think it is - that climate change is nothing to worry about - then you are on the wild fringes of the debate: not a single government or science academy agrees with you.

Cost and security of supply are also crucial of course, but not at the expense of cutting carbon. And that makes a quartet of new reports pretty depressing reading. The G20 must tackle climate change. Protesters take part in an anti-G20 demonstration in Nice on Tuesday. Photograph: Frederic Nebinger/Getty Images Critics often accuse world leaders of being able to focus on no more than one problem at once.

So with the economic crisis, and the eurozone's problems in particular, dominating recent G20 discussions, what are the chances of progress on climate change at this week's leaders' summit in Cannes? The economic crisis has done little to sharpen the pressure for action to tackle climate change. Uppdatering av den vetenskapliga grunden för klimatarbetet. Isande sommar. Global Warming's Terrifying New Math. 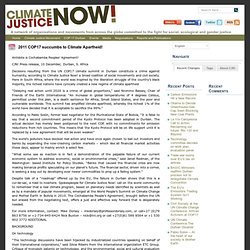 CJN! Press release, 10 December, Durban, S. Africa Decisions resulting from the UN COP17 climate summit in Durban constitute a crime against humanity, according to Climate Justice Now! A broad coalition of social movements and civil society. “Delaying real action until 2020 is a crime of global proportions,” said Nnimmo Bassey, Chair of Friends of the Earth International. Watch 131 Years of Global Warming in 26 Seconds. Don't Have Flash? Watch this video on your iPad or iPhone here While temperatures soared for many this summer, this video takes the longer historical view. It comes to us from our friends at NASA and is an amazing 26-second animation depicting how temperatures around the globe have warmed since 1880. That year is what scientists call the beginning of the “modern record.” You’ll note an acceleration of those temperatures in the late 1970s as greenhouse gas emissions from energy production increased worldwide and clean air laws reduced emissions of pollutants that had a cooling effect on the climate, and thus were masking some of the global warming signal.

The data come from NASA's Goddard Institute for Space Studies in New York, which monitors global surface temperatures. Klimatförändringarna oroar EU-medborgare. The scientific finding that settles the climate-change debate. “Global warming is real,” Muller wrote last week in The Wall Street Journal. Rick Perry, Herman Cain, Michele Bachmann and the rest of the neo-Luddites who are turning the GOP into the anti-science party should pay attention. “When we began our study, we felt that skeptics had raised legitimate issues, and we didn’t know what we’d find,” Muller wrote. “Our results turned out to be close to those published by prior groups.