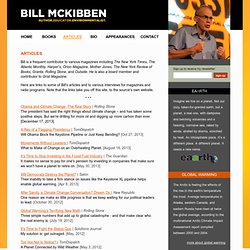 He is also a board member and contributor to Grist Magazine. Here are links to some of Bill's articles and to various interviews for magazines and radio programs. Mike Hulme. Refuel on Nuclear Power – the Silver Bullet!!! Caves point to thawing of Siberia. Science 22 Feb 13 Frost crystals at the entrance of Ledyanaya Lenskaya Cave. 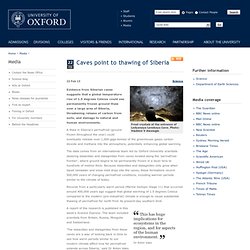 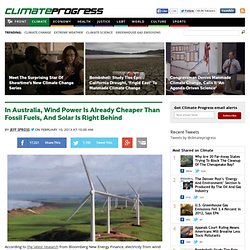 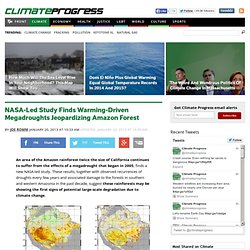 These results, together with observed recurrences of droughts every few years and associated damage to the forests in southern and western Amazonia in the past decade, suggest these rainforests may be showing the first signs of potential large-scale degradation due to climate change. At left, the extent of the 2005 megadrought in the western Amazon rainforests during the summer months of June, July and August as measured by NASA satellites. The most impacted areas are shown in shades of red and yellow. A NASA JPL news release.

Saved. National Climate Assessment Details Stronger Evidence Of Global Warming And Its Impacts. A federal committee has published a draft of the nation's third climate assessment report, a comprehensive analysis of the latest and best peer-reviewed science on the extent and impacts of global warming on the United States. 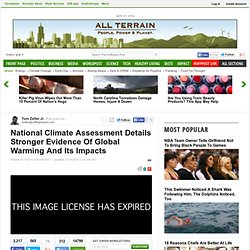 None of the body's findings are entirely new, but the report suggests that evidence is now stronger and clearer than ever that the climate is rapidly changing -- primarily as a result of human activities, including the copious burning of fossil fuels. Observed weather extremes are on the rise, and the possible connection between at least some of these events and human-induced climate change is also more strongly supported by the science. The nation can expect increased impacts on everything from crops to fresh water supplies, and better and broader national plans for adaptation are needed, the assessment noted.

"Climate change presents a major challenge for society," the committee's leadership said in a letter addressed to the American people. The Elephant in the Room: Climate Change. The most under-reported news story of 2012? 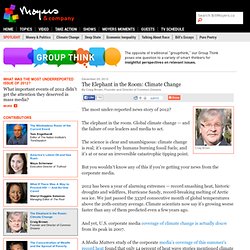 The elephant in the room. Global climate change — and the failure of our leaders and media to act. The science is clear and unambiguous: climate change is real; it’s caused by humans burning fossil fuels; and it’s at or near an irreversible catastrophic tipping point. Despair after climate conference, but UN still offers hope. Ticking Arctic Carbon Bomb May Be Bigger Than Thought. SAN FRANCISCO, CALIFORNIA—Scientists are expressing fresh concerns about the carbon locked in the Arctic's vast expanse of frozen soil. 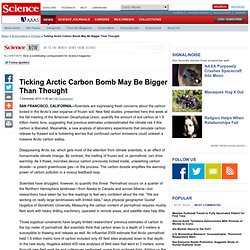 New field studies, presented here this week at the fall meeting of the American Geophysical Union, quantify the amount of soil carbon at 1.9 trillion metric tons, suggesting that previous estimates underestimated the climate risk if this carbon is liberated. Meanwhile, a new analysis of laboratory experiments that simulate carbon release by thawed soil is bolstering worries that continued carbon emissions could unleash a massive Arctic carbon wallop.

Disappearing Arctic ice, which gets most of the attention from climate scientists, is an effect of humanmade climate change. By contrast, the melting of frozen soil, or permafrost, can drive warming. As it thaws, microbes devour carbon previously locked inside, unleashing carbon dioxide—a potent greenhouse gas—in the process. UN Climate Delegates Agree on Something: Geo-engineering Is No Solution. Climate Talks Yield Commitment to Ambitious, but Unclear, Actions. Osama Faisal/Associated Press Bard Vegar Solhjell, Norway’s environmental minister, with protesters on Saturday. 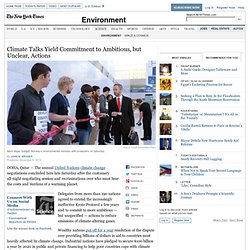 Delegates from more than 190 nations agreed to extend the increasingly ineffective Kyoto Protocol a few years and to commit to more ambitious — but unspecified — actions to reduce emissions of climate-altering gases. Wealthy nations put off for a year resolution of the dispute over providing billions of dollars in aid to countries most heavily affected by climate change. Industrial nations have pledged to secure $100 billion a year by 2020 in public and private financing to help poor countries cope with climate change, but have been vague about what they plan to do before then. 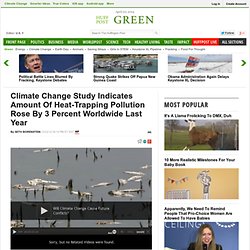 So scientists say it's now unlikely that global warming can be limited to a couple of degrees, which is an international goal. The overwhelming majority of the increase was from China, the world's biggest carbon dioxide polluter. Of the planet's top 10 polluters, the United States and Germany were the only countries that reduced their carbon dioxide emissions. Last year, all the world's nations combined pumped nearly 38.2 billion tons of carbon dioxide into the air from the burning of fossil fuels such as coal and oil, according to new international calculations on global emissions published Sunday in the journal Nature Climate Change.

Geo-engineering wins scant enthusiasm at U.N. climate talks. Nov. 30 News: 'We Have To Face The Fact That The Deniers Are Wrong,' Says Sen. Whitehouse In Climate Hearing. “There is a new normal of new extremes and we have to be prepared for it,” Sen. 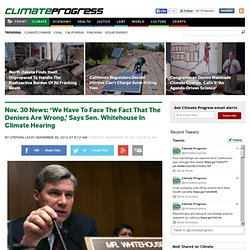 Ocean City, M.D.A National Guard humvee travels through high water to check the area after the effects of Hurricane Sandy Tuesday, Oct. 30, 2012, in Ocean City, Md. Sandy, the storm that made landfall Monday, caused multiple fatalities, halted mass transit and cut power to more than 6 million homes and businesses. (Alex Brandon, AP)Lower ManhattanWater is pumped on to the street in lower Manhattan in New York, U.S., on Thursday, Nov. 1, 2012. The New York region is replacing a rail network built over a century with a patchwork constructed day-by-day to move its 8 million people again as it struggles back to life after Hurricane Sandy.

Climate-changing methane 'rapidly destabilizing' off East Coast, study finds. In this visualization, the Gulf Stream is seen as the dark red current coming into the Atlantic from the Gulf of Mexico. By Miguel Llanos, NBC News A changing Gulf Stream off the East Coast has destabilized frozen methane deposits trapped under nearly 4,000 square miles of seafloor, scientists reported Wednesday. And since methane is even more potent than carbon dioxide as a global warming gas, the researchers said, any large-scale release could have significant climate impacts. Temperature changes in the Gulf Stream are "rapidly destabilizing methane hydrate along a broad swathe of the North American margin," the experts said in a study published Wednesday in the peer-reviewed journal Nature. Using seismic records and ocean models, the team estimated that 2.5 gigatonnes of frozen methane hydrate are being destabilized and could separate into methane gas and water.

“Because global demand for rice will increase further with a growing world population, our results suggest that without additional measures, the total methane emissions from rice agriculture will strongly increase.” Seminal Study: Climate Change ‘Footprint’ In North America, ‘The Continent With The Largest Increases in Disasters’ Poll: Growing Majority Of Americans Understand The Earth Is Warming And Humans Are The Cause. World's biggest geoengineering experiment 'violates' UN rules. A controversial American businessman dumped around 100 tonnes of iron sulphate into the Pacific Ocean as part of a geoengineering scheme off the west coast of Canada in July, a Guardian investigation can reveal.

Lawyers, environmentalists and civil society groups are calling it a "blatant violation" of two international moratoria and the news is likely to spark outrage at a United Nations environmental summit taking place in India this week. An Illustrated Guide to the Science of Global Warming Impacts: How We Know Inaction Is the Gravest Threat Humanity Faces. Extreme weather adds urgency for action on climate change – panel. The recent rash of extreme weather and climate events — droughts, heat waves, extreme precipitation — has provided a greater impetus for taking action to reduce planet warming greenhouse gas emissions. But a lack of political will and the complexities of the climate system pose enormous obstacles, according to international development and climate scientists who spoke at a Columbia University forum on Thursday.