Getting to Know Your Country. Model UN Made Easy: How to Write a Resolution. Delegates writing resolutions One of the most common questions I get from newer delegates and teachers is how to write a resolution. 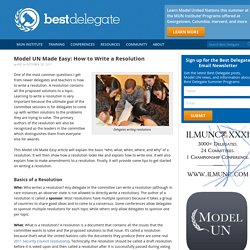 A resolution contains all the proposed solutions to a topic. Learning to write a resolution is very important because the ultimate goal of the committee sessions is for delegates to come up with written solutions to the problems they are trying to solve. The primary authors of the resolution will also be recognized as the leaders in the committee which distinguishes them from everyone else for awards. This Model UN Made Easy article will explain the basic “who, what, when, where, and why” of a resolution. Basics of a Resolution Who: Who writes a resolution? What: What is a resolution? When/Where: When and where are resolutions written? Why: The ultimate purpose of a committee session is to pass a resolution. How to Write a Resolution How: how do I write a resolution and what does the format look like? Sample Resolution 1. Resolution heading 2. 3. 1. Amendments. Cop 20: UN climate change conference. Flooding Risk From Climate Change, Country by Country. More than a quarter of Vietnam’s residents live in areas likely to be subject to regular floods by the end of the century. 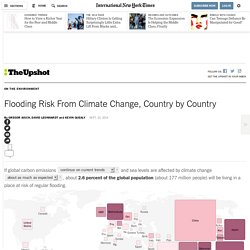 Four percent of China’s residents — 50 million people — live in the same kind of areas. Across the globe, about one person in 40 lives in a place likely to be exposed to such flooding by the end of the century, absent significant changes. These figures are the result of a new analysis of sea levels and flood risk around the world, conducted by Climate Central and based on more detailed sea-level data than has previously been available. The analysis offers country-by-country estimates for populations at risk of regular flooding, accounting for a range of potential emissions reductions and for variations of sea level sensitivity to climate change.

Globally, eight of the 10 large countries most at risk are in Asia. Some countries in Asia may choose to emulate the Dutch system in coming decades, but some of the Asian nations are not wealthy and would struggle to do so. The world, mapped by countries’ greatest fears. The biggest fear among the Japanese is, unsurprisingly, nuclear weapons. 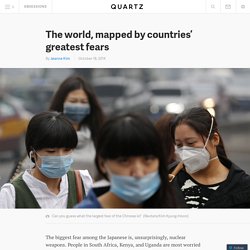 People in South Africa, Kenya, and Uganda are most worried about AIDS and other diseases. And inequality is the deepest concern for much of Europe and the US. These are among the findings of Pew Research Center’s survey of over 48,000 people in 44 countries this spring (so, it’s worth noting, pre-Ebola pandemic). The survey asked people to choose among five categories of threat: AIDS and other diseases, nuclear weapons, pollution and environment, inequality, and religious and ethnic hatred. Here are those 44 countries, mapped by their greatest fears: By region, the Middle East saw religious and ethnic hatred as their biggest threat; Europe and the US saw the gap between the rich and poor as theirs; pollution and environmental issues caused the most dread in Asia; Latin America mostly feared nuclear weapons; and Africans saw AIDS and other diseases as their greatest danger. A few other things we noticed: Carbon map – which countries are responsible for climate change?