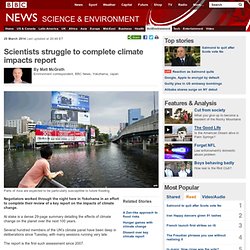 America could soon face more days of extreme rainfall. Wavier jet stream 'may drive weather shift' 15 February 2014Last updated at 14:32 ET By Pallab Ghosh Science correspondent, BBC News, Chicago Pallab Ghosh: "We may have to get used to winters where spells of weather go on for weeks - or even months" The main system that helps determine the weather over Northern Europe and North America may be changing, research suggests. 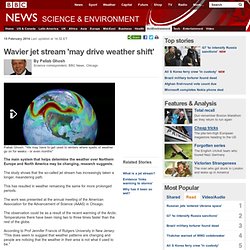 What the U.N.’s new climate report says about North America. Global warming is a global crisis, but the effects of climate change are being felt differently in different corners of the globe. 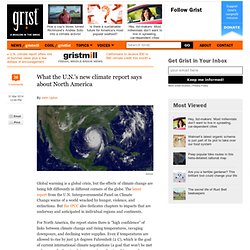 The latest report from the U.N. Intergovernmental Panel on Climate Change warns of a world wracked by hunger, violence, and extinctions. But the IPCC also dedicates chapters to impacts that are underway and anticipated in individual regions and continents. For North America, the report states there is “high confidence” of links between climate change and rising temperatures, ravaging downpours, and declining water supplies.

Even if temperatures are allowed to rise by just 3.6 degrees Fahrenheit (2 C), which is the goal of current international climate negotiations (a goal that won’t be met unless everybody gets a lot more serious about curbing greenhouse gas pollution), such severe weather is going to get a lot worse. At-risk cities hold solutions to climate change. It is already taking shape as the 21st century urban nightmare: A big storm hits a city like Shanghai, Mumbai, Miami, or New York, knocking out power supply and waste treatment plants, washing out entire neighborhoods, and marooning the survivors in a toxic and foul-smelling swamp. 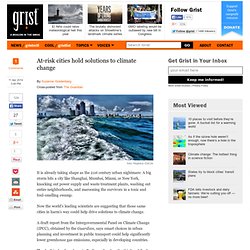 Now the world’s leading scientists are suggesting that those same cities in harm’s way could help drive solutions to climate change. A draft report from the Intergovernmental Panel on Climate Change (IPCC), obtained by the Guardian, says smart choices in urban planning and investment in public transport could help significantly lower greenhouse gas emissions, especially in developing countries. Scientists tell Americans: This climate change thing really is a big deal.

One of the world’s largest and most influential science organizations is launching a new campaign to cut through the noise of climate denialism and help the public understand the threat of climate change. 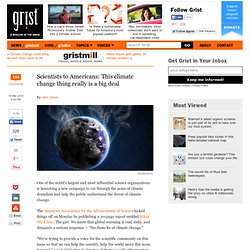 The American Association for the Advancement of Science kicked things off on Monday by publishing a 20-page report entitled What We Know. The gist: We know that global warming is real, risky, and demands a serious response — “the three Rs of climate change.” “We’re trying to provide a voice for the scientific community on this issue so that we can help the country, help the world move this issue forward,” AAAS CEO Alan Leshner said during a call with reporters on Tuesday morning. “If we don’t move now we are at tremendous risk for some very high impact consequences, many of which are laid out in the report.” Winter in den USA: Kälte-Kunst in der Eishöhle. Seit 1994 gab es nicht mehr so viel Eis auf den Great Lakes im US-Bundesstaat Michigan: Die anhaltende Kälte hat dort die Seenlandschaft in ein besonderes Naturschauspiel verwandelt. 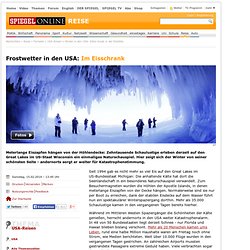 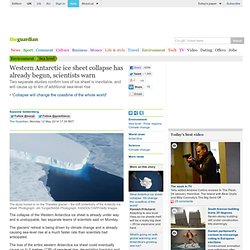 The glaciers' retreat is being driven by climate change and is already causing sea-level rise at a much faster rate than scientists had anticipated. The loss of the entire western Antarctica ice sheet could eventually cause up to 4 metres (13ft) of sea-level rise, devastating low-lying and coastal areas around the world. But the researchers said that even though such a rise could not be stopped, it is still several centuries off, and potentially up to 1,000 years away. Heatwaves could threaten food crops, study warns. Future heatwaves could threaten key global food crops if climate change is not addressed, according to a British study. 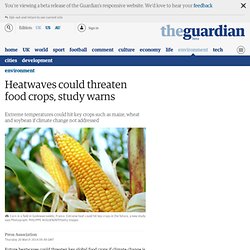 Researchers came to the conclusion after estimating the effects of extreme temperatures and raised carbon dioxide levels on maize, wheat and soybean production. While more C02 in the atmosphere may boost plant growth, this effect is likely to be counteracted by extreme heat, they warn. Crops are especially vulnerable to heat around anthesis, the flowering period of the plant. “At this stage, extreme temperatures can lead to reduced pollen sterility and reduced seed set, greatly reducing the crop yield,” said lead scientist Delphine Deryng, from the Tyndall Centre for Climate Change Research at the University of East Anglia. Earlier studies found that climate change is likely to reduce maize yields by the end of the century under a “business-as-usual” greenhouse gas emissions scenario.