Heat is Piling Up in the Depths of the Indian Ocean. The world’s oceans are playing a game of hot potato with the excess heat trapped by greenhouse gas emissions. 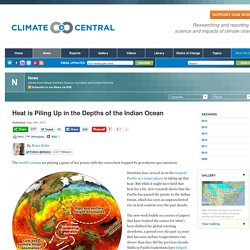 Proof Of Global Warming: Scientists Confirms Hotspot On Earth's Troposphere. Ever felt like the Earth is melting from the heat? 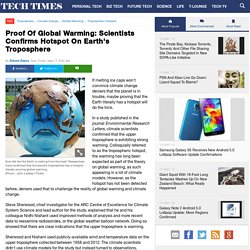 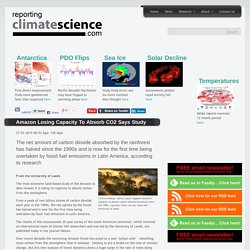 Nature paper suggests Amazon's capacity to absorb carbon dioxide has halved since the 1990s. Courtesy: Peter van der Sleen and University of Leeds From the University of Leeds. The Costs of Climate Adaptation, Explained in 4 Infographics. As global temperatures climb, so do the costs of adapting to a warmer world. 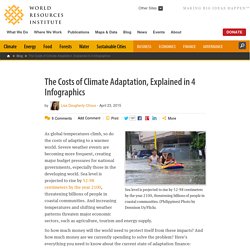 Severe weather events are becoming more frequent, creating major budget pressures for national governments, especially those in the developing world. Sea level is projected to rise by 52-98 centimeters by the year 2100, threatening billions of people in coastal communities. And increasing temperatures and shifting weather patterns threaten major economic sectors, such as agriculture, tourism and energy supply. Arctic sea ice extent hits record low for winter maximum. Arctic sea ice has hit a record low for its maximum extent in winter, which scientists said was a result of climate change and abnormal weather patterns. 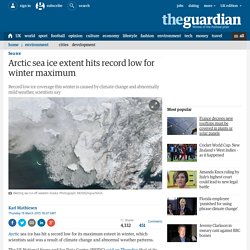 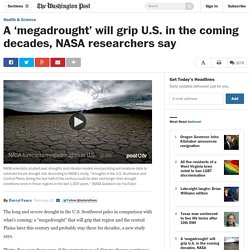 According to NASA's study, "droughts in the U.S. Southwest and Central Plains during the last half of this century could be drier and longer than drought conditions seen in those regions in the last 1,000 years. " (NASA Goddard via YouTube) The US is on track for a record-breaking megadrought. In just a few decades, a huge swath of the US could experience the biggest megadrought that the US has seen in 1,000 years. 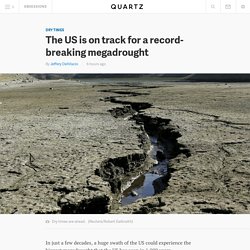 New research published on Feb. 12 in the journal Science Advances predicts that this hypothetical could become reality from the Mississippi River to California. It could make the Dust Bowl of the 1930s seem mild by comparison. No one knows what megadroughts, which can last from 30-50 years, look like. So researchers from NASA and Columbia and Cornell Universities went back 1,000 years to peer confidently into our drier future. Increase In Arctic Solar Absorption Measured. 19.12.2014 10:42 Age: 24 days Click to enlarge. 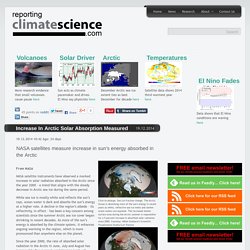 Sea ice fraction change. The Arctic Ocean is absorbing more of the sun's energy in recent years as white, reflective sea ice melts and darker ocean waters are exposed. Terrifying NASA Video Shows How Carbon Emissions Are Engulfing the World. Carbon dioxide emissions are invisible, but NASA has just made them all too real. 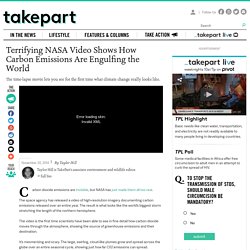 The space agency has released a video of high-resolution imagery documenting carbon emissions released over an entire year. The result is what looks like the world’s biggest storm stretching the length of the northern hemisphere. The video is the first time scientists have been able to see in fine detail how carbon dioxide moves through the atmosphere, showing the source of greenhouse emissions and their destination.

It’s mesmerizing and scary. The large, swirling, cloud-like plumes grow and spread across the globe over an entire seasonal cycle, showing just how far C02 emissions can spread. Certainty vs. Uncertainty: Understanding Scientific Terms About Climate Change. Uncertainty is ubiquitous in our daily lives. 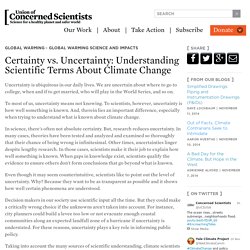 We are uncertain about where to go to college, when and if to get married, who will play in the World Series, and so on. To most of us, uncertainty means not knowing. To scientists, however, uncertainty is how well something is known. And, therein lies an important difference, especially when trying to understand what is known about climate change. Methane Problems and Fracking Risk. CREDIT: Shutterstock Satellite observations of huge oil and gas basins in East Texas and North Dakota confirm staggering 9 and 10 percent leakage rates of heat-trapping methane.

“In conclusion,” researchers write, “at the current methane loss rates, a net climate benefit on all time frames owing to tapping unconventional resources in the analyzed tight formations is unlikely.” In short, fracking speeds up human-caused climate change, thanks to methane leaks alone. Remember, natural gas is mostly methane, (CH4), a super-potent greenhouse gas, which traps 86 times as much heat as CO2 over a 20-year period. So even small leaks in the natural gas production and delivery system can have a large climate impact — enough to gut the entire benefit of switching from coal-fired power to gas. Back in February, we reported that the climate will likely be ruined already well past most of our lifespans by the time natural gas has a net climate benefit.