Abolition of Decc 'major setback for UK's climate change efforts' The abolition of the Department of Energy and Climate Change has been condemned by former ministers as a major setback to British efforts to combat global warming. 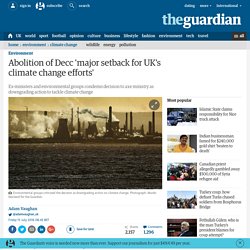 Decc was closed in a series of sweeping changes to the government unveiled by the new prime minister, Theresa May, on Thursday. Its functions, which include representing the UK at international climate talks, responsibility for meeting carbon targets and levying subsidies for green energy, have been transferred to a beefed-up business department led by Greg Clark. But Ed Davey, who served as Liberal Democrat secretary of state at Decc between 2012 and 2015, criticised the decision. Britain’s new leader just replaced the climate department with a business department. After the Brexit vote, climate hawks voiced concern that a new British government could be less aggressive in fighting climate change. 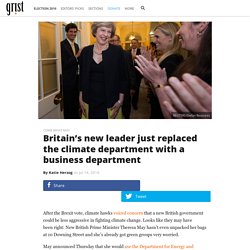 Looks like they may have been right: New British Prime Minister Theresa May hasn’t even unpacked her bags at 10 Downing Street and she’s already got green groups very worried. May announced Thursday that she would axe the Department for Energy and Climate Change and replace it with the newly formed Department for Business, Energy and Industrial Strategy. Cutting carbon emissions isn’t enough. We need negative emissions. Humans will have to not only stop emitting greenhouse gases by 2085, but also develop technology that will result in negative emissions — the removal of 15 billion tons of carbon dioxide from the atmosphere each year by the end of the century — in order to prevent global warming from exceeding 2 degrees C (3.6 degrees F), according to a new study. 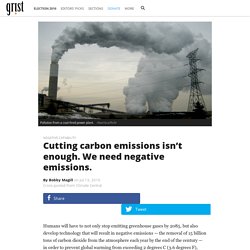 Human greenhouse gas emissions, including methane and carbon dioxide, have already warmed the globe more than 1 degree C (1.8 degrees F) compared to pre-industrial levels. The Paris Climate Agreement negotiated last year seeks to cap warming to below 2 degrees C, while at the same time pursuing an even more ambitious goal of limiting warming to 1.5 degrees C. But according to a new National Center for Atmospheric Research study, just cutting emissions under the Paris agreement may not be enough to keep global warming from blasting past 2 degrees C, said Benjamin Sanderson, the study’s lead author. Le casse tête de la répartition de l'effort climatique entre les Européens. At 8 million strong, the Arctic story is just beginning. The movement to save the Arctic has become a great story. 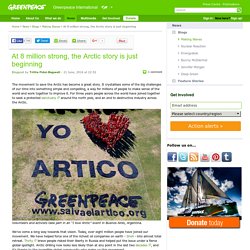 It crystallises some of the big challenges of our time into something simple and compelling, a way for millions of people to make sense of the world and work together to improve it. For three years people across the world have joined together to seek a protected sanctuary around the north pole, and an end to destructive industry across the Arctic. Volunteers and activists take part in an “I love Arctic” event in Buenos Aires, Argentina. We’ve come a long way towards that vision. Today, over eight million people have joined our movement.

World renowned pianist Ludovico Einaudi plays historic concert on Arctic Ocean. Amsterdam, 20 June, 2016 - Italian pianist and composer, Ludovico Einaudi, today performed one of his own compositions, Elegy for the Arctic, on a floating platform in the Arctic Ocean, against the backdrop of the Wahlenbergbreen glacier (in Svalbard, Norway). [1] Through his music Einaud has added his voice to those of eight million people from across the world demanding protection for the Arctic. 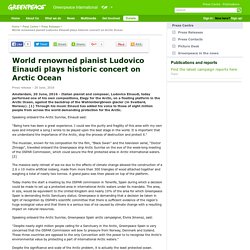 Speaking onboard the Arctic Sunrise, Einaudi said: “Being here has been a great experience. I could see the purity and fragility of this area with my own eyes and interpret a song I wrote to be played upon the best stage in the world. UN boss: Brexit would mean rewriting Paris Agreement on climate change – EurActiv.com. A vote for Brexit in tomorrow’s UK referendum on EU membership (23 June) would mean that the COP21 agreement would have to be rewritten, the executive secretary of the UN Framework Convention on Climate Change said today (22 June) in Brussels. 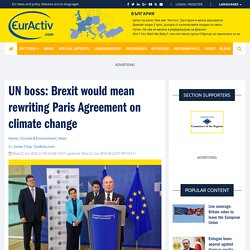 Christiana Figueres, one of the architects of the historic deal struck last December to limit warming to no more than two degrees above pre-industrial levels, said the international pact, “would require recalibration”. It is currently in the process of ratification. Cities forge world's largest alliance to curb climate change. Cities are responsible for an estimated 75 percent of carbon emissions contributing to climate change By Sebastien Malo NEW YORK, June 22 (Thomson Reuters Foundation) - Cities in six continents joined up to form the world's largest alliance to combat climate change on Wednesday, a move intended to help make ground-level changes to slow global warming. 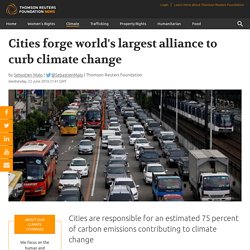 More than 7,100 cities in 119 countries formed the Global Covenant of Mayors for Climate and Energy, a network for helping exchange information on such goals as developing clean energy, organizers said. Zimbabwe: Trade Unions Embrace Climate Change. TRADE unions in Africa are moving to embrace climate change and green collar jobs that preserve or restore the environment in traditional sectors such as manufacturing and construction, or in emerging green sectors such as renewable energy and energy efficiency. 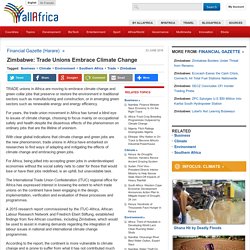 For years, the trade union movement in Africa has turned a blind eye to issues of climate change, choosing to focus mainly on occupational safety and health despite the disastrous effects of the phenomenon on ordinary jobs that are the lifeline of unionism. With clear global indications that climate change and green jobs are the new phenomenon, trade unions in Africa have embarked on researches to find ways of adapting and mitigating the effects of climate change and embracing green jobs. Ministers Accept EU Emission Trading Scheme Needs Review. Today EU Environment Ministers acknowledged the need for a reform of the EU carbon market. 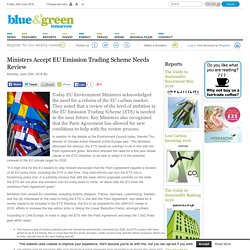 They noted that a review of the level of ambition in the EU Emission Trading Scheme (ETS) is needed in the near future. Key Ministers also recognised that the Paris Agreement has allowed for new conditions to help with the review process. In reaction to the debate at the Environment Council today, Wendel Trio, director of Climate Action Network (CAN) Europe said: “The Ministers discussed the obvious: the ETS needs an overhaul to be in line with the Paris Agreement goals. Ministers stressed the need for a five year review clause in the ETS Directive, to be able to adapt it to the potential increase of the EU climate target for 2030. Bangladesh vulnerable to climate change as coastal residents are getting displaced. Climate change campaigners welcome China's plan to halve meat consumption. COP22 : transformer l'essai. #BeyondCOP21 #Etats-Unis #Trump promet d’annuler l’accord de Paris sur le #climat une fois élu #climatoscepticisme. ETS reform proposal disregards the Paris Agreement.

[Brussels 31 May 2016, FOR IMMEDIATE RELEASE] Member of the European Parliament in charge of the EU Emissions Trading Scheme (ETS) reform file for the Parliament’s Environment Committee, Ian Duncan has just released his draft proposal for the reform of the ETS after 2020. 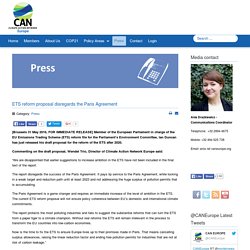 Commenting on the draft proposal, Wendel Trio, Director of Climate Action Network Europe said: “We are disappointed that earlier suggestions to increase ambition in the ETS have not been included in the final text of the report. The report disregards the success of the Paris Agreement. It pays lip service to the Paris Agreement, while locking in a weak target and reduction path until at least 2023 and not addressing the huge surplus of pollution permits that is accumulating. The Paris Agreement is a game changer and requires an immediate increase of the level of ambition in the ETS.

How A Brexit Would Impact Climate Change and Future Climate Negotiations - Green European Journal. At COP21 in December 2015, 195 countries adopted the first-ever universal, legally binding global climate deal. The agreement sets out a global action plan to put the world on track to avoid dangerous climate change by limiting global warming to well below 2°C. The Paris Agreement is a bridge between today’s policies and climate-neutrality before the end of the century. G7 nations pledge to end fossil fuel subsidies by 2025.

The G7 nations have for the first time set a deadline for the ending most fossil fuel subsidies, saying government support for coal, oil and gas should end by 2025. The leaders of the UK, US, Canada, France, Germany, Italy, Japan and the European Union encouraged all countries to join them in eliminating “inefficient fossil fuel subsidies” within a decade. “Given the fact that energy production and use account for around two-thirds of global greenhouse gas emissions, we recognise the crucial role that the energy sector has to play in combatting climate change,” said the leaders’ declaration, issued at the end their summit in Japan. ARCTIQUE. Oslo ouvre de nouvelles zones à la prospection pétrolière. Les implications de l'Accord de Paris pour l'océan.

This month the world reached one of its own milestones. Meteorologists are seeing global warming's effect on the weather. Whatever happened to normal weather? Earth has always experienced epic storms, debilitating drought, and biblical floods. But lately it seems the treadmill of disruptive weather has been set to fast-forward. How Climate Change Is Fueling Violence Against Women. [Colloque au Sénat] AFRIQUE: LA COP21...ET APRÈS? 30 mars 2016. Paris climate agreement has ‘failed’ poor countries, report says. The international climate deal agreed in Paris has “failed to include meaningful mechanisms” to guarantee financial support for poorer countries adapting to global warming, according to a report by Oxfam. In the study, Unfinished Business, the aid charity claims the high cost of climate adaptation measures, such as creating flood defenses and drought-resistant crops, means smaller-scale farmers across the world are “being left on their own”.

The 2015 Paris Climate Conference (COP21), held last December, was at the time heralded by some as an “historic” agreement. But Oxfam has criticised the West for failing to commit to any concrete investment targets. The report, released as UN officials recommence climate negotiations in the German city of Bonn, states: “If global cooperation on climate change is to be inclusive, durable and fair, it must leave no one behind – particularly not those who are most vulnerable to its impacts and least able to cope.” Climate change protests around the world.