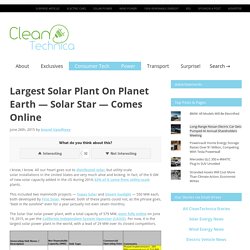 All our heart goes out to distributed solar, but utility-scale solar installations in the United States are very much alive and kicking. In fact, of the 6 GW of new solar capacity added in the US during 2014, 63% of it came from utility-scale plants. This included two mammoth projects — Topaz Solar and Desert Sunlight — 550 MW each, both developed by First Solar. The Solar Star solar power plant, with a total capacity of 579 MW, went fully online on June 19, 2015, as per the California Independent System Operator (CAISO). BHE Solar, a subsidiary of Berkshire Hathaway Energy (known as MidAmerican Energy Holdings Company until 2014, one of the investment arms of Warren Buffet) owns the projects. Our regular readers would be aware that BHE also owns the Topaz Solar plant. 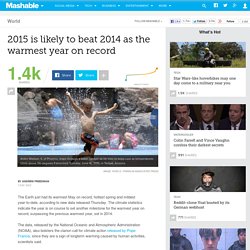 The climate statistics indicate the year is on course to set another milestone for the warmest year on record, surpassing the previous warmest year, set in 2014. The data, released by the National Oceanic and Atmospheric Administration (NOAA), also bolsters the clarion call for climate action released by Pope Francis, since they are a sign of longterm warming caused by human activities, scientists said. According to NOAA, May was not only the warmest such month on record, globally, coming at 1.57 degrees Fahrenheit above the 20th century average, but it also blew away the old record by 0.14 degrees Fahrenheit. The old record was set just last year, indicating that 2015 is running hotter than 2014. (Typically, these records are exceeded by smaller margins of 0.1 or 0.2 degrees Fahrenheit.) Image: WeatherBELL Analytics Mashable's Miriam Kramer contributed reporting.

Sheril Kirshenbaum sur Twitter : "The global perspective on #climate change via @SFriedScientist... Can’t Stand the Heat — The Nib — Medium. Peter Hannam sur Twitter : "#Renewableenergy starts to win price race in the US: #climate #solar... Renewable energy starts to win price race in the US. US set to unveil rules to cut carbon pollution from power plants by 30% The Obama administration will propose sweeping new environmental rules on Monday, cutting carbon pollution from existing power plants by 30% over 2005 levels by 2030, according to people briefed on the plan. 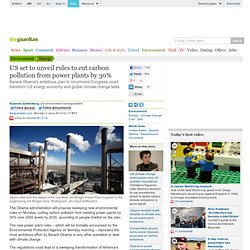 The new power plant rules – which will be formally announced by the Environmental Protection Agency on Monday morning – represent the most ambitious effort by Barack Obama or any other president to deal with climate change. The regulations could lead to a sweeping transformation of America's energy economy, if they survive an onslaught from business and conservative groups, and Republicans in Congress. The rules could also break open negotiations for a global climate change deal, the United Nations climate chief, Christiana Figueres, said.

The 30% target, first reported by the Wall Street Journal, represents the first attempt by any president to regulate carbon pollution from power plants. Obama had initially sought to deal with climate change through Congress. Nordpil : New map of Greenland's topography ... Greenland may lose more ice than expected. Intergovernmental Panel on Climate Change. All-Time Heat Records Broken in . . . Alaska?! A massive dome of high pressure, sometimes referred to as a "heat dome," has set up shop over Alaska, bringing all-time record temperatures just a few weeks after parts of the state had a record cold start to spring. 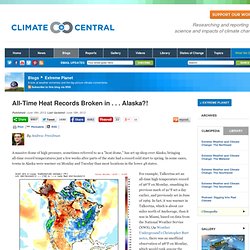 In some cases, towns in Alaska were warmer on Monday and Tuesday than most locations in the lower 48 states. Forecast temperature anomalies on June 19 from the GFS computer model. Click image to enlarge. Credit: WeatherBell.com. For example, Talkeetna set an all-time high temperature record of 96°F on Monday, smashing its previous mark of 91°F set a day earlier, and previously set in June of 1969. In Valdez, which sits along the cool waters of Prince William Sound, the temperature reached a remarkable 90°F Monday, beating the previous all-time mark of 87°F. Here is how the National Weather Service described the Valdez record (the ALL CAPS style is from the original public statement): A map of the upper level air flow at about 18,000 feet.