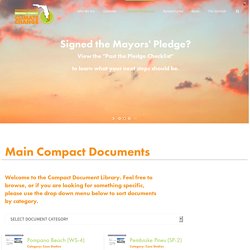 The AGN is comprised of a citywide system of bicycle/pedestrian trails/facilities, enhanced public transit facilities, expanded local circulator service, and innovative regional parking improvement programs. Eventually, this network will link with the larger network of greenways and trails that is planned for Miami-Dade County and South Florida and will be a key component of the State of Florida’s outdoor recreational amenities. 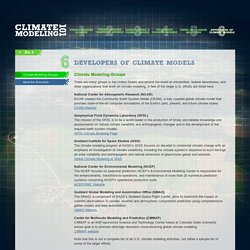 A few of the larger U.S. efforts are listed here: National Center for Atmospheric Research (NCAR) NCAR created the Community Earth System Model (CESM), a fully coupled global climate model that provides state-of-the-art computer simulations of the Earth's past, present, and future climate states.CESM Website Geophysical Fluid Dynamics Laboratory (GFDL) The mission of the GFDL is to be a world leader in the production of timely and reliable knowledge and assessments on natural climate variability and anthropogenic changes and in the development of the required earth system models.GFDL Climate Modeling Page Note that this is not a complete list of all U.S. climate modeling activities, but rather a sample list of some of the larger efforts.

Why trust climate models? It’s a matter of simple science. Talk to someone who rejects the conclusions of climate science and you’ll likely hear some variation of the following: “That’s all based on models, and you can make a model say anything you want.” 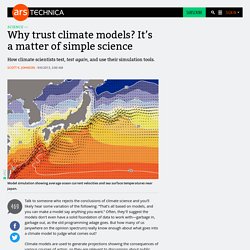 Often, they'll suggest the models don't even have a solid foundation of data to work with—garbage in, garbage out, as the old programming adage goes. But how many of us (anywhere on the opinion spectrum) really know enough about what goes into a climate model to judge what comes out? Climate models are used to generate projections showing the consequences of various courses of action, so they are relevant to discussions about public policy.

Of course, being relevant to public policy also makes a thing vulnerable to the indiscriminate cannons on the foul battlefield of politics. Skepticism is certainly not an unreasonable response when first exposed to the concept of a climate model. Connect all those equations together and the model operates like a virtual, rudimentary Earth. How reliable are climate models? Climate models are mathematical representations of the interactions between the atmosphere, oceans, land surface, ice – and the sun. 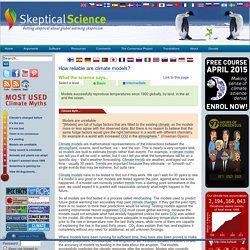 This is clearly a very complex task, so models are built to estimate trends rather than events. For example, a climate model can tell you it will be cold in winter, but it can’t tell you what the temperature will be on a specific day – that’s weather forecasting. Climate trends are weather, averaged out over time - usually 30 years. Trends are important because they eliminate - or "smooth out" - single events that may be extreme, but quite rare.

Climate models have to be tested to find out if they work. So all models are first tested in a process called Hindcasting. Where models have been running for sufficient time, they have also been proved to make accurate predictions. 3) CLIMATE CHANGE. CLIMATE CHANGE – Introduction This section of Calder’s Updates is unavoidably a battleground, but within reason it will stick to the physics and dodge the propaganda that surrounds climate research. 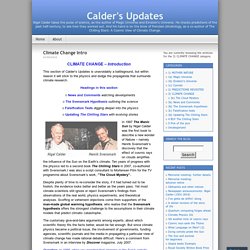 Headings in this section News and Comments watching developmentsThe Svensmark Hypothesis outlining the scienceFalsification Tests digging deeper into the physicsUpdating The Chilling Stars with evolving stories In 1997 The Manic Sun by Nigel Calder was the first book to describe a new wonder of Nature – namely Henrik Svensmark’s discovery that the effect of cosmic rays on clouds amplifies the influence of the Sun on the Earth’s climate. Ten years of progress with the physics led to a second book The Chilling Stars in 2007, co-authored with Svensmark.I was also a script consultant to Mortensen Film for the TV programme about Svensmark’s work, “The Cloud Mystery”. The customary give-and-take arguments among experts, about which scientific theory fits the facts better, would be fair enough.