Why Atheism Is a Force for Good. The Perils Faced by My Atheist Family in Our God-Obsessed Community. “Goddammit!” 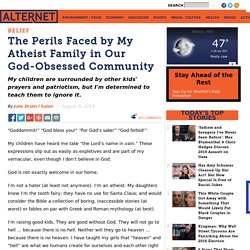 “God bless you!” The State of Atheism in America… from a Christian Perspective. What If I’m an Atheist? is a Teen’s Guide to Life Without Religion. Conservative Christians point fingers at atheists to cover growing corruption in church. When Bill O’Reilly recently tried to pin America’s spree of mass shootings on atheism rather than guns or mental illness, he hoped to tap a specific set of beliefs that are common among Bible believers— that morality derives from religion; that Born Again Christians are a light unto the world while atheists (who lack any basis for ethics or morality) spend their empty lives in pursuit of money and sex; that when Christians get raptured or otherwise lose the upper hand, America will descend into the orgy of sex, violence, and anarchy depicted in the Left Behind books and movie. 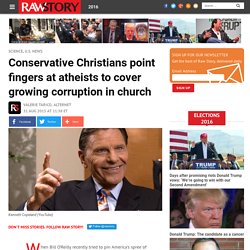 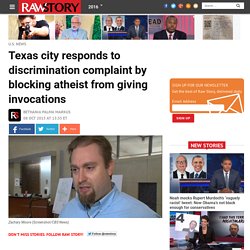 Zachary Moore, who represents the humanist group in the city of Keller, was set to speak before the City Council meeting when Mayor Mark Matthews intervened and announced he instead would be giving the prayer, which he started with “gracious heavenly father.” “Atheist in Foxholes” Monument in Madison Honors Non-Religious Veterans. Criticizing Islam vs. Anti-Muslim Bigotry. There is nothing inherent in atheism that prevents an atheist from engaging in bigotry. 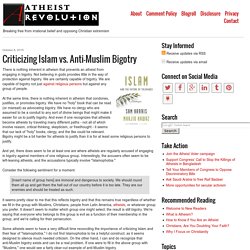 Not believing in gods provides little in the way of protection against bigotry. We are certainly capable of bigotry. We are capable of bigotry not just against religious persons but against any group of people. Guatemalan Atheist Heckled During Speech Criticizing Proposed Law to Mandate Bible Education in Public Schools. Patheos. Star Trek’s “Q,” John de Lancie, Comes Out as Openly Secular. A Compilation of James Randi’s Best Arguments and Comebacks. Why You Should Be Openly Non-Religious, Explained by a Rapper in Under 90 Seconds. We Are Like Stones: The Beauty of Nihilism. Julian Bond, the Civil Rights Activist Who Died Over the Weekend, Wasn’t Religious. Sin City: Why atheists are as moral as any religious group. Father Of Falsehoods: Why Ted Cruz’s Dad Is Wrong About Prayer In Schools. Many misconceptions abound about the issue of prayer in schools, and some people persist in believing a lot of myths. 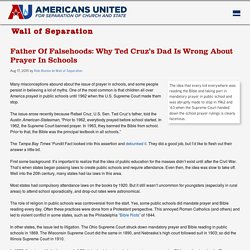 One of the most common is that children all over America prayed in public schools until 1962 when the U.S. Supreme Court made them stop. The issue arose recently because Rafael Cruz, U.S. Turkish Atheists Give Soup to the Homeless Every Week. What If I’m an Atheist? is a Teen’s Guide to Life Without Religion. No Persecution Here: IRS Commissioner Says Tax Agency Has No Plans To Punish Christian Colleges That Reject Marriage Equality. The far right makes no secret of its hatred for the Internal Revenue Service, but recent comments by IRS Commissioner John Koskinen should earn the agency a few brownie points with fundamentalists who fear that Christian colleges will be forced to extend benefits to married same-sex couples or risk their tax exemptions. 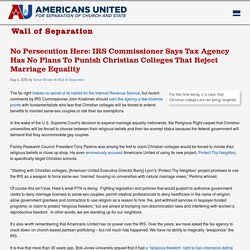 In the wake of the U.S. Supreme Court’s decision to expand marriage equality nationwide, the Religious Right carped that Christian universities will be forced to choose between their religious beliefs and their tax-exempt status because the federal government will demand that they accommodate gay couples. Family Research Council President Tony Perkins was among the first to claim Christian colleges would be forced to violate their religious beliefs or close up shop. He even erroneously accused Americans United of using its new project, Protect Thy Neighbor, to specifically target Christian schools. The Cardinal’s Gasbag: Catholic League Leader Rushes To Defend Dolan From AU Criticism. There is a thing called Godwin’s Law on the internet. 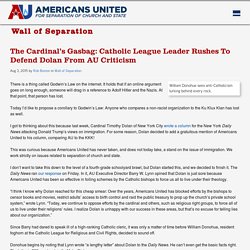 It holds that if an online argument goes on long enough, someone will drag in a reference to Adolf Hitler and the Nazis. At that point, that person has lost. Today I’d like to propose a corollary to Godwin’s Law: Anyone who compares a non-racist organization to the Ku Klux Klan has lost as well. I got to thinking about this because last week, Cardinal Timothy Dolan of New York City wrote a column for the New York Daily News attacking Donald Trump’s views on immigration.

Playground Problems: New Suit Claims Ind. Teacher Discriminated Against Atheist Student. An Indiana public school teacher ostracized a student after he said he did not believe in God, according to a new lawsuit. 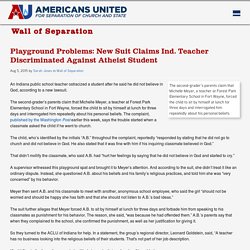 The second-grader’s parents claim that Michelle Meyer, a teacher at Forest Park Elementary School in Fort Wayne, forced the child to sit by himself at lunch for three days and interrogated him repeatedly about his personal beliefs. The complaint, published by the Washington Post earlier this week, says the trouble started when a classmate asked the child if he went to church. The child, who’s identified by the initials “A.B.” throughout the complaint, reportedly “responded by stating that he did not go to church and did not believe in God. Austin Atheists Helping the Homeless. Austin Atheists Helping the Homeless is a 100% volunteer-driven group that collects and distributes basic living supplies to people who are homeless once a month under the bridge at 8th and I-35. 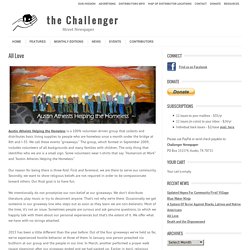 We call these events “giveaways.” The group, which formed in September 2009, includes volunteers of all backgrounds and many families with children. Ron Reagan FFRF ad now on CNN, banned by CBS, ABC, NBC. Click here to watch the ad. 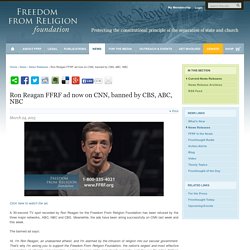 A 30-second TV spot recorded by Ron Reagan for the Freedom From Religion Foundation has been refused by the three major networks, ABC, NBC and CBS. Meanwhile, the ads have been airing successfully on CNN last week and this week. The banned ad says: Mississippi School District Forced to Pay Up After Violating Court Order and Repeatedly Promoting Christianity. Defending Discrimination: The Religious Right Is Unhappy About Americans United’s New Project To End Religion-Based Refusals. Lawsuit Filed Against Brevard County (FL) After Officials Block Atheists from Giving Invocations. How I Figured Out Christianity is Not Real ~ ExChristian.Net. 11/11/2013 | Share this article: Top 5 Scariest Christians in Film. A New Book Looks at How Atheism Shaped Western Civilization. No Longer Quivering — Republican Congresswoman From WA Asks for Obamacare Horror Stories on Facebook… And Then Becomes One. Virtually everyone who posts something online wants it to go viral.

I’ll be the first to admit it. It has happened to me in the past, and it’s exhilarating. Watching your hit counter skyrocket, seeing the Facebook likes and Twitter retweets pile in, hearing that something you write is ranked #1 on Reddit… it can make a person forgo a night’s sleep, just to keep hitting “refresh” and watch the numbers climb. A few days ago, a Republican Congresswoman from Washington state, Cathy McMorris Rodgers, went viral. She posted a graphic on her Facebook page to commemorate the 5-year anniversary of the signing of Obamacare, more appropriately named the Patient Protection and Affordable Care Act. The result was amazing. Famous atheists.