Building Staff Rapport With Flash Lessons. During my first year as Chief Academic Officer of Collingswood (New Jersey) Public Schools, I visited just about every classroom in our eight-building district at least once. 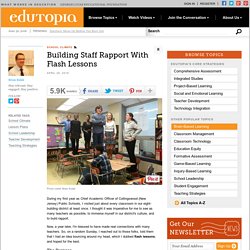 I thought it was imperative for me to see as many teachers as possible, to immerse myself in our district's culture, and to build rapport. Now, a year later, I'm blessed to have made real connections with many teachers. So, on a random Sunday, I reached out to those folks, told them that I had an idea bouncing around my head, which I dubbed flash lessons, and hoped for the best. The Purpose At its core, the purpose of the flash lesson is to work with as many teachers as possible. Catered to both the teacher and his or her students An invitation for the teacher to become a student again A reminder that administrators were once teachers, too The Invitation For teachers who don't yet trust and respect me, an invitation won't be extended -- and that's OK. The Rules The Lesson "You're going to make us stand on our desks?

" How To Weave Growth Mindset Into School Culture. Adilene Rodriguez admits she has always struggled with academics. 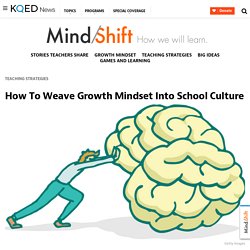 Especially in middle school she hated getting up early, found her classes boring and didn’t really see where it was all going. When she started her freshman year at Arroyo High School in San Lorenzo, California, just south of Oakland, she was a shy student who rarely spoke up in class and had little confidence in herself as a scholar. Rodriguez is now a senior and her approach to school has changed dramatically over her high school career.

She attributes her shift to her freshman science teacher, Jim Clark, who taught the class about growth mindset from the very beginning and backed up the discussion with action. “He would tell me, ‘You need to push yourself, that’s how you’re going to grow. She didn’t believe him at first; she thought she just wasn’t good at science. When Clark suggested Rodriguez take AP biology she resisted, scared she’d be unprepared for the challenge. Traits of Top Principals: Q & A With New Leaders&apos; Benjamin Fenton - District Dossier. 5 Questions That Promote Student Success in High-Poverty Schools. Editor's note: This piece was adapted from Turning High-Poverty Schools into High-Performing Schools by William H. 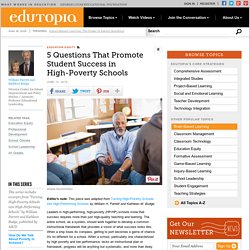 Parrett and Kathleen M. Budge. Leaders in high-performing, high-poverty (HP/HP) schools know that success requires more than just high-quality teaching and learning. The entire school, as a system, should work together to develop a common instructional framework that provides a vision of what success looks like. When a ship loses its compass, getting to port becomes a game of chance. Through the collaborative efforts of the leaders and staff, HP/HP schools focus on three kinds of learning: student, professional, and system. Supporting the Learning Agendas Click image to download (PDF). Image credit: ASCD, courtesy of William Parrett and Kathleen Budge. Is your school focusing on all three kinds of learning?

The following five questions can help support leaders as they make the three learning agendas the focus of their actions: What is an instructional framework? Action Advice. How Schools Can Create Foundations For High Quality Teaching. When Harvard professor Jal Mehta and his team began researching the factors necessary to support high quality teaching, they started by identifying schools that focused on more than the reading and literacy test scores. 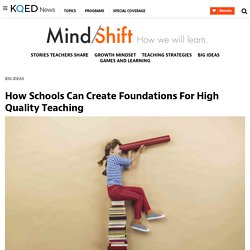 The researchers knew there was far more to good teaching and real learning than what shows up on tests and they wanted to find schools focused on a more complex set of skills. They wanted to find out what good teaching looks like, how teachers learn to do it and what supports they need to spread those ideas. After spending time at 30 schools talking with administrators, teachers and education leaders, Mehta’s team came up with three big areas of improvement described in a white paper called “From Quicksand to Solid Ground: Building a Foundation to Support Quality Teaching.” Education is one of the few big industries that doesn’t prioritize investment in research about what works in classroom learning and applying that research to developing high quality materials. Education Week.