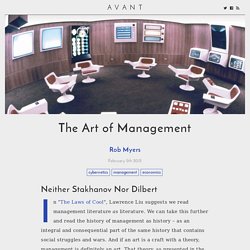 New altered bacteria can convert sunlight into liquid fuel. You know you’re on to some comedy gold when a paper opens with the line: "Popcorn is the funniest corn to cook, because it jumps and makes a ‘pop’ sound in our pans.” 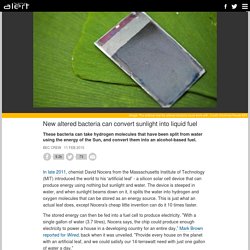 Yep, okay. The man who brought us the lithium-ion battery at the age of 57 has an idea for a new one at 92. AUSTIN, TEXAS—The chances are you have never heard of—nor, until looking at this page, ever seen—John Bannister Goodenough. 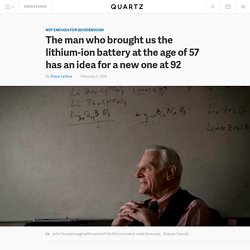 But you know his work. In fact, you almost certainly own some. Consider the last six or seven decades of technological and scientific leaps: the polio vaccine, space rocketry, the Arpanet (predecessor of the internet). Against those, two inventions stand out in terms of social and economic consequence, not to mention pure ubiquity, inventions without which the lives of a majority of the world’s population—crossing lines of age and ethnicity, religion, moral underpinning, medical condition, political affiliation, taste, style, national identity—would be utterly different.

Welcome to Earth: population 500 million – Linda Marsa. The Tesla P85D's 'insane mode' could be the future of driving. A Chinese engineering and design firm has unveiled the world’s tallest 3D-printed building - a five-storey residential apartment block made from recycled construction materials. 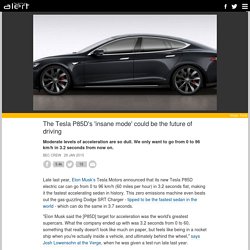 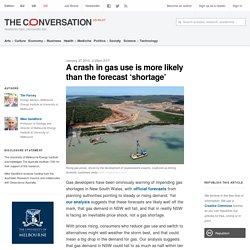 Yet our analysis suggests that these forecasts are likely well off the mark, that gas demand in NSW will fall, and that in reality NSW is facing an inevitable price shock, not a gas shortage. With prices rising, consumers who reduce gas use and switch to alternatives might well weather the storm best, and that could mean a big drop in the demand for gas. Austria is 100 percent nuclear-free. Policy. 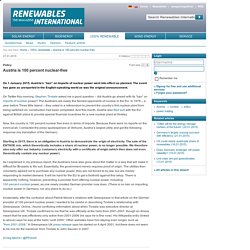 Oil-rich Saudis find new help in struggle to delay action on climate change: Cheap gas. As the ruler of a country that sits atop 300 billion barrels of oil, Saudi Arabia’s King Abdullah was no fan of proposals to limit the burning of fossil fuels. 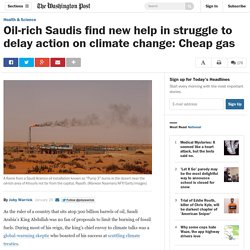 During most of his reign, the king’s chief envoy to climate talks was a ­global-warming skeptic who boasted of his success at scuttling climate treaties. But it was in the monarch’s final months that Saudi officials hit upon a more effective way to knock the clean-energy movement off its tracks: cheap gas. Since Abdullah’s death last week, Saudi officials have recommitted themselves to recent policies that have helped drive oil prices to their lowest levels in a decade.

Sensitivity%20and%20the%20Carbon%20Budget.pdf. Most Republicans Say They Back Climate Action, Poll Finds. Photo WASHINGTON — An overwhelming majority of the American public, including nearly half of Republicans, support government action to curb , according to a poll conducted by The New York Times, and the nonpartisan environmental research group Resources for the Future. 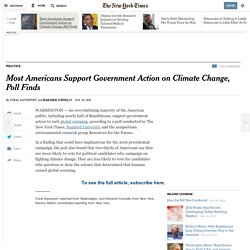 In a finding that could have implications for the 2016 presidential campaign, the poll also found that two-thirds of Americans say they are more likely to vote for political candidates who campaign on fighting climate change. They are less likely to vote for candidates who question or deny the science that determined that humans caused global warming. Among Republicans, 48 percent said they are more likely to vote for a candidate who supports fighting climate change, a result that Jon A. Krosnick, a professor of political science at Stanford University and an author of the survey, called “the most powerful finding” in the poll. Continue reading the main story. The Town Where Everyone Got Free Money. “Do we have to behave in particular ways to justify compassion and support?” 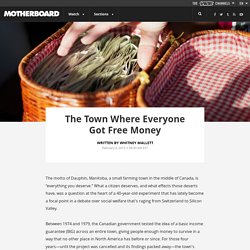 Explicit cookie consent. Universal Basic Income as the Social Vaccine of the 21st Century — Basic income. “An ounce of prevention is worth a pound of cure.” — Benjamin Franklin For those not familiar with this old idiom, it means it’s less costly to avoid problems from ever happening in the first place, than it is to fix problems once they do. 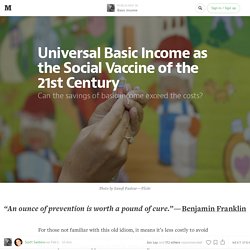 It also happens to be the entire logic behind the invention of the vaccine, and it is my belief that universal basic income has the same potential. The Most Cost-Effective Public Health Tool Ever Devised The savings provided by vaccines are staggering to the point of almost being beyond comprehension. The human suffering avoided through vaccinations are immeasurable, but the economic benefits are not, and in fact have been measured. We estimate that the United States invested approximately US dollars 35 billion in polio vaccines between 1955 and 2005… The historical and future investments translate into over 1.7 billion vaccinations that prevent approximately 1.1 million cases of paralytic polio and over 160,000 deaths.