Climate Change Is Making Wildfires Worse. CO2 emissions stall thanks to China's passion for renewables - environment - 17 June 2015. The energy field is changing (Image: Jerry Ojang/Getty) New energy policies in China are being heralded as the source of a potentially historic break in the link between global economic growth and rising carbon dioxide emissions. 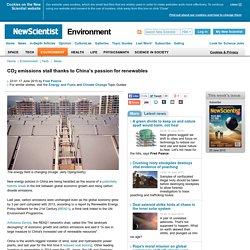 Last year, carbon emissions were unchanged even as the global economy grew by 3 per cent compared with 2013, according to a report by Renewable Energy Policy Network for the 21st Century (REN21), a think tank linked to the UN Environment Programme. Arthouros Zervos, the REN21 network's chair, called this "the landmark decoupling" of economic growth and carbon emissions and said it "is due in large measure to China's increased use of renewable resources". China is the world's biggest installer of wind, solar and hydroelectric power plants, and last year for the first time it reduced coal burning.

Explicit cookie consent. GREEN-FINGERED folk who invested in British forests over the past decade did better, on average, than those who planted their cash in more obvious places, such as stocks and bonds. 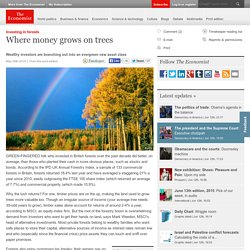 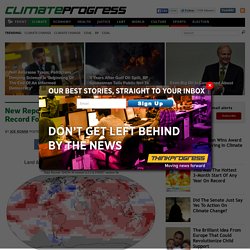 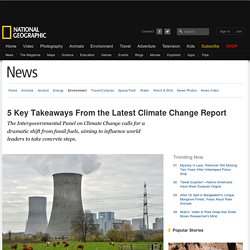 Protecting the planet will require a dramatic shift away from fossil fuels, the report from the Intergovernmental Panel on Climate Change emphasizes. The release was timed for political impact, arriving weeks before international negotiators meet in Lima, Peru, to start forging a new strategy on climate change. "Science has spoken.

There is no ambiguity in their message," United Nations Secretary-General Ban Ki-moon said in a news conference this morning in Copenhagen. Cgiarclimate : Latest #IPCC predicts that... Climate Change Isn’t Main Culprit in Decline of Coral Reefs: Report. July 10, 2014 | 3:43 pm | Print. 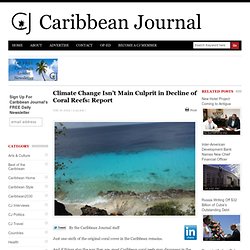 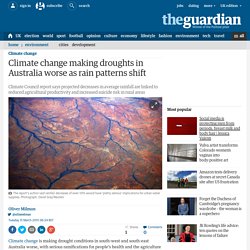 The Climate Council report states that since the mid-1990s, south-east Australia has experienced a 15% drop in rainfall during late autumn and early winter, with a 25% slump in average rainfall in April and May. A drought that has gripped western Queensland and northern New South Wales since 2012 has put pressure on farmers and forced wildlife into starvation. Climate Change Study Finds U.S. Is Already Widely Affected. The effects of human-induced climate change are being felt in every corner of the United States, scientists reported Tuesday, with water growing scarcer in dry regions, torrential rains increasing in wet regions, heat waves becoming more common and more severe, wildfires growing worse, and forests dying under assault from heat-loving insects. 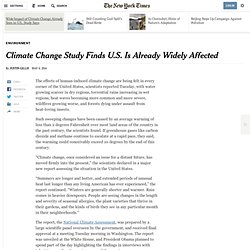 Such sweeping changes have been caused by an average warming of less than 2 degrees Fahrenheit over most land areas of the country in the past century, the scientists found. If greenhouse gases like carbon dioxide and methane continue to escalate at a rapid pace, they said, the warming could conceivably exceed 10 degrees by the end of this century. “Climate change, once considered an issue for a distant future, has moved firmly into the present,” the scientists declared in a major new report assessing the situation in the United States. Clock Ticking To Stop Climate Change, Warns UN. The world faces "severe, pervasive and irreversible" damage unless swift action is taken to switch to fossil fuel alternatives and cut carbon emissions, according to the most detailed climate change report in years. 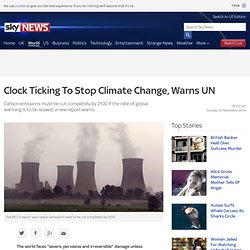 "A window of opportunity" to limit global warming to 2C (3.6F) is closing, according to UN experts. They warn that if targets are not met, more extreme weather events will occur, and the problem will become more expensive to solve. Right now, levels of three greenhouse gases – methane, nitrous oxide and carbon dioxide – are at unprecedented levels that haven't been seen in the past 800,000 years. To slow down permanent increases in global temperatures, carbon emissions need to be reduced by between 40% and 70% by 2050, and completely eliminated by the end of the century, according to the UN's Intergovernmental Panel on Climate Change (IPCC). 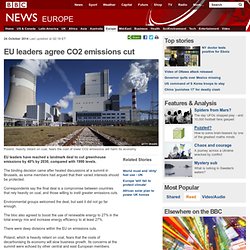 The binding decision came after heated discussions at a summit in Brussels, as some members had argued that their varied interests should be protected. Correspondents say the final deal is a compromise between countries that rely heavily on coal, and those willing to instil greater emissions cuts. Environmental groups welcomed the deal, but said it did not go far enough. The bloc also agreed to boost the use of renewable energy to 27% in the total energy mix and increase energy efficiency to at least 27%. There were deep divisions within the EU on emissions cuts.

Explicit cookie consent. Global Warming or Global Governance? (Full Length) Global warming slowdown 'could last another decade' Hockeyschtick1 : "State Of The Climate Report"... IPCC: rapid carbon emission cuts vital to stop 'severe' impact of climate change. Climate change is set to inflict “severe, widespread, and irreversible impacts” on people and the natural world unless carbon emissions are cut sharply and rapidly, according to the most important assessment of global warming yet published. 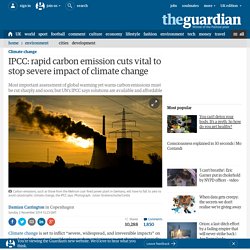 The stark report states that climate change has already increased the risk of severe heatwaves and other extreme weather and warns of worse to come, including food shortages and violent conflicts. But it also found that ways to avoid dangerous global warming are both available and affordable. John Thorpe sur Twitter : "@afneil You mean like this? Michael E. Mann sur Twitter : ""2014 was hottest year on record globally, by far" via @ClimateProgress: #FauxPause" Newscientist : Global warming will boost urban ...

Nytimes : The Big Melt Accelerates ... Obama unveils tough new regulations to combat carbon pollution – live. Right Relevance: Search or Login for deep topical relevance. Right Relevance: Search or Login for deep topical relevance. The Arctic Ocean: Awakening. A daily record of atmospheric carbon dioxide from Scripps Institution of Oceanography at UC San Diego. The top ten global warming 'skeptic' arguments answered. Global temperatures are rising, and the top 10 climate contrarian explanations are not good. Photograph: Aaron Tilley for the Guardian Roy Spencer is one of the less than 3% of climate scientists whose research suggests that humans are playing a relatively minimal role in global warming. As one of those rare contrarian climate experts, he's often asked to testify before US Congress and interviewed by media outlets that want to present a 'skeptical' or false balance climate narrative.

These are the countries most at risk from a climate change 'apocalypse' These maps claim to show which countries would be most vulnerable in the event of the effects of climate change reaching life-threatening levels - if they already haven’t. They were compiled using the ND-Gain Index, a project of the University of Notre Dame, in Indiana in the US. The index is built on two variables, vulnerability and readiness, and has been monitoring countries since 1995.

The UK is seventh-best equipped to deal with the aftershock of climate change reaching its tipping point, behind mostly Scandinavian countries. Countries most at risk meanwhile are in Central America, South Asia and sub-Saharan Africa. Weather_king : 5 month period Jan-May 2014 ...