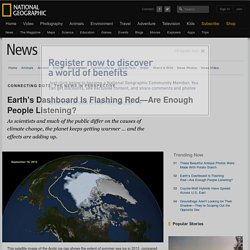 A Pew Research Center survey, released last week as part of a broader report on science and society, found that only 50 percent of Americans believe that humans are mostly responsible for climate change, while 87 percent of scientists accept this view. This 37-point gap persists even though thousands of scientists during the past few decades have been involved in publishing detailed reports linking climate change to carbon emissions.

Evidence of a human role in climate change keeps piling up. Recent studies of record-breaking temperatures, rising sea levels, and high levels of heat-trapping carbon dioxide in the atmosphere all point to an Earth under stress from a rapidly expanding human presence. We are burning record levels of coal, oil, and natural gas to fuel modern society. It's Getting Hot. A Way Forward: Facing Climate Change. What happened to the holes in the ozone layer? CBBC Newsround. A Student's Guide to Global Climate Change. The Video is simle but gives a lot of imformation. Climate change. Global Warming. Climate change: The possible effects.

31 March 2014Last updated at 11:00 ET A selection of BBC reports on the possible effects of climate change in the UK and worldwide. 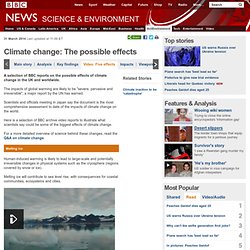 The impacts of global warming are likely to be "severe, pervasive and irreversible", a major report by the UN has warned. Scientists and officials meeting in Japan say the document is the most comprehensive assessment to date of the impacts of climate change on the world. Here is a selection of BBC archive video reports to illustrate what scientists say could be some of the biggest effects of climate change. For a more detailed overview of science behind these changes, read the Q&A on climate change. Human-induced warming is likely to lead to large-scale and potentially irreversible changes in physical systems such as the cryosphere (regions covered by snow or ice). Melting ice will contribute to sea level rise, with consequences for coastal communities, ecosystems and cities. 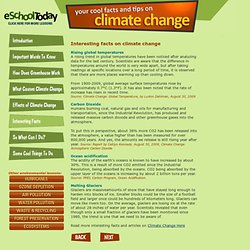 Scientists are aware that the difference in temperatures around the world is very wide apart, but after taking readings at specific locations over a long period of time, it is observed that there are more places warming up than cooling down. From 1900-2009, global average surface temperatures rose by approximately 0.7°C (1.3°F). It has also been noted that the rate of increase has risen in recent time. Source: Climate Change: Global Temperature, by LuAnn Dahlman, August 30, 2009 Carbon Dioxide Humans burning coal, natural gas and oils for manufacturing and transportation, since the Industrial Revolution, has produced and released massive carbon dioxide and other greenhouse gases into the atmosphere.

Ocean acidification The acidity of the earth's oceans is known to have increased by about 30%.

Climate change impacts and adaptation. 24 March 2014Last updated at 22:26 ET Climate change will continue even if emissions are stabilised, making adaptation vital The UN's climate panel has published the second part of its long-awaited report. 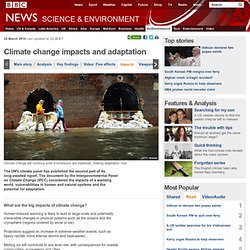 The document by the Intergovernmental Panel on Climate Change (IPCC) considered the impacts of a warming world, vulnerabilities in human and natural systems and the potential for adaptation. The Kids Guide To Global Warming. People are seeing change all over the world. 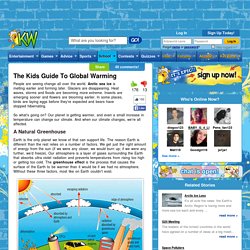 Arctic sea ice is melting earlier and forming later. Glaciers are disappearing. Heat waves, storms and floods are becoming more extreme. Insects are emerging sooner and flowers are blooming earlier. In some places, birds are laying eggs before they’re expected and bears have stopped hibernating. So what’s going on? A Natural Greenhouse Earth is the only planet we know of that can support life. The Greenhouse Effect Natural Cycles Several natural cycles of the Earth keep it and its atmosphere in perfect balance. Weather Versus Climate Weather is what’s happening with the atmosphere that surrounds us.