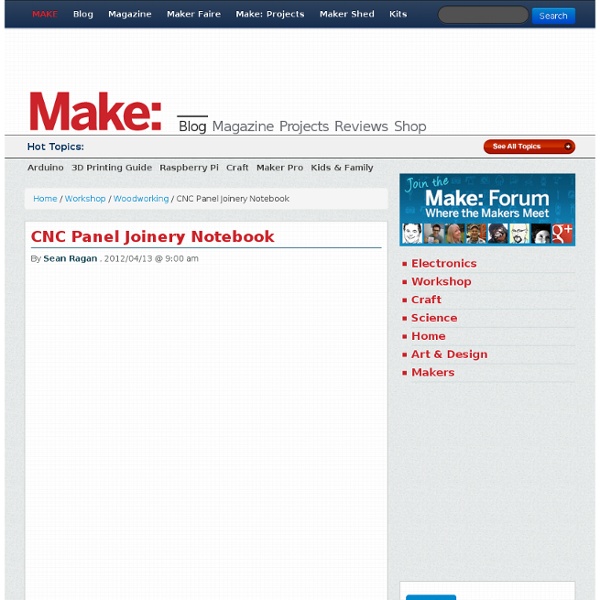 I’ve been collecting clever ways of slotting flat stock together since I first read Nomadic Furniture back in 1999, well before the advent of the accessible hobby-class CNC tools that, today, make manufacturing parts like these pretty easy. Now, the world is full of people designing models, project enclosures, sculpture, furniture, and all kinds of other cool stuff to be assembled from parts made on laser cutters and CNC routers, and I keep expecting a definitive book or website to emerge that covers the “bag of tricks” in an organized way. So far, I haven’t found it. I may have missed it. Or maybe this article can serve as a jumping-off point. In any case, I think it’s time to open up my file. In presenting this material, I want to first acknowledge my respect for the world’s established and ancient traditions of joinery. I may abuse some terms, without meaning to, and I am glad to be corrected by those who are in the know about traditional joinery. Laser vs. Biasing Cross (“X”) Joints Related:  FAB HOUSE • Play Project

The Otic Oasis Kitchen Shelves The concept has been well thought out, right down to the smallest detail - from the knobs on the gas cooker to the pull-out spray on the faucet. Designed and manufactured by Vipp, the kitchen has a unique cohesion, combining quality, functionality and design. Like the classic Vipp bin and other Vipp products, the new kitchen expresses a complete concept. The Vipp kitchen is made from stainless steel and consists of three main components: Wall Module, Tall Module and a Kitchen Island. The modules are available in various sizes and can be assembled according to individual wishes and requirements. “Just as with the Vipp bin, we are bringing industrial style into your home in the shape of an excellent, high quality product, which can easily withstand constant use,” says Morten Bo Jensen, Head of Design at Vipp. The kitchen is for sale in the Vipp flagship store with worldwide delivery.

Flexible Stream • Digital Wood Joints Wood Joints are fascinating! They embellish old furniture and wood constructions of ancient Japanese temples alike. Everytime we come across them, we are filled with admiration: Admiration for the skill of the master craftsman, as their creator, but also admiration for the balance between function and beauty, which turns the furniture or temple into a work of art. With the onset of industrialisation, the traditional wood joints have been banned more and more to the background. As computer-controlled wood processing machines move into the cabinet-makers' workshops, the way two pieces of wood are joined together in a construction needs to be reconsidered. The result of this research are 50 digital wood joints, divided into frame joints, board joints and carcass joints. We are looking forward for the submission of your modifications and pictures of implementation. Arto from Finland has done some Davetone Mixcubes:

Hexayurt Project - incredibly cheap shelter for those in need The Capsule Lamp The Capsule Lamp has captured our imagination. The intriguingly interactive lighting fixture gleans its idea from the plastic toy capsules of vending machines. Initially, the Capsule was designed by Hong Kong-based Design Systems Ltd for the Actif children’s wear brand, but it has now taken on a life of its own giving tinkerers and creatives another reason to customize and make it their own. The main structure of the ceiling pendant is made of stained oak, and either without the capsules, or with just the empty capsules, it looks rather coolly Scandinavian. While the fixture comes with a set number of toys, we can envision hiding our own little personal items in the capsules. We think we’ll just keep the Capsules for ourselves and never let kids near it. - Tuija Seipell

Global Village Construction Set by Marcin Jakubowski Open Source Ecology is a network of farmers, engineers, and supporters building the Global Village Construction Set - a modular, DIY, low-cost, open source, high-performance platform that allows for the easy fabrication of the 50 different industrial machines that it takes to build a small, sustainable civilization with modern comforts. The aim of the GVCS is to lower the barriers to entry into farming, building, and manufacturing. Its a life-size lego set that can create entire economies, whether in rural Missouri, where the project was founded, or in the developing world. So Far we’ve prototyped 8 of the 50 Machines and we’ve been expanding rapidly. Please watch these videos if you are new to the project: What Makes the Global Village Construction Set so special? Why should I help fund this project? This toolkit will establish a new high benchmark of efficiency for green, low-cost housing construction - making natural building FAST and CHEAP, rather than SLOW and EXPENSIVE. Absolutely!

Restaurant Farma Kreaton - Komotini, Greece Restaurant Farma Kreaton (Meat Farm in Greek)is the recently opened addition to the well publicized Fabrica Kreaton restaurant located in the center of the city of Komotini, (Adrianoupoleos 4) in northeastern Greece. The 270 square-meter (almost 3,000 square- feet), 150 seat new restaurant is in essence an additional open-concept eating area to the existing Fabrica Kreaton that, in turn, is themed around a Greek butcher shop. Both are housed in a renovated 1950s farm house with a large yard. In Farma Kreaton, in addition to the graphic components, we were attracted to the lovely, white-painted wood floors and the overall feel of a temporary barn-raising supper. The simple plank tables, the mismatched, unpretentious chairs, the humble potted plants and herbs on the tables, all exude a feel of a space dedicated — just for the moment — to sumptuous eating and enjoyment of good company. The food at Farma Kreaton is typical Greek meat-based plates, and the diners are predominantly locals.