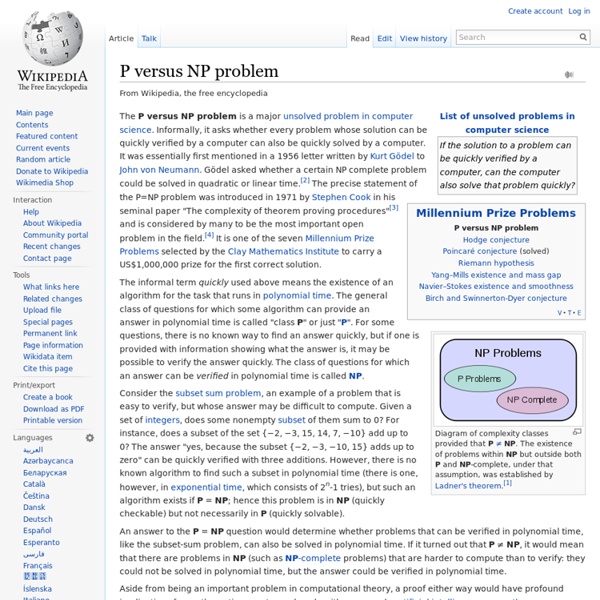 Diagram of complexity classes provided that P≠NP. The existence of problems within NP but outside both P and NP-complete, under that assumption, was established by Ladner's theorem.[1] The P versus NP problem is a major unsolved problem in computer science. Informally, it asks whether every problem whose solution can be quickly verified by a computer can also be quickly solved by a computer. It was essentially first mentioned in a 1956 letter written by Kurt Gödel to John von Neumann. Gödel asked whether a certain NP complete problem could be solved in quadratic or linear time.[2] The precise statement of the P=NP problem was introduced in 1971 by Stephen Cook in his seminal paper "The complexity of theorem proving procedures"[3] and is considered by many to be the most important open problem in the field.[4] It is one of the seven Millennium Prize Problems selected by the Clay Mathematics Institute to carry a US$1,000,000 prize for the first correct solution. Context[edit]

Numbers: Facts, Figures & Fiction Click on cover for larger image Numbers: Facts, Figures & Fiction by Richard Phillips. Published by Badsey Publications. See sample pages: 24, 82, 103. Order the book direct from Badsey Publications price £12. In Australia it is sold by AAMT and in the US by Parkwest. For those who need a hardback copy, a limited number of the old 1994 hardback edition are still available. Have you ever wondered how Room 101 got its name, or what you measure in oktas? This new edition has been updated with dozens of new articles, illustrations and photographs. Some press comments – "This entertaining and accessible book is even more attractive in its second edition..." – Jennie Golding in The Mathematical Gazette "...tangential flights into maths, myth and mystery..." – Vivienne Greig in New Scientist ... and on the first edition – Contents –

Primality Proving 2.1: Finding very small primes For finding all the small primes, say all those less than 10,000,000,000; one of the most efficient ways is by using the Sieve of Eratosthenes (ca 240 BC): Make a list of all the integers less than or equal to n (greater than one) and strike out the multiples of all primes less than or equal to the square root of n, then the numbers that are left are the primes. (See also our glossary page.) For example, to find all the odd primes less than or equal to 100 we first list the odd numbers from 3 to 100 (why even list the evens?) The first number is 3 so it is the first odd prime--cross out all of its multiples. Now the first number left is 5, the second odd prime--cross out all of its multiples. This method is so fast that there is no reason to store a large list of primes on a computer--an efficient implementation can find them faster than a computer can read from a disk. To find individual small primes trial division works well.

THE LAST DAYS OF THE POLYMATH People who know a lot about a lot have long been an exclusive club, but now they are an endangered species. Edward Carr tracks some down ... From INTELLIGENT LIFE Magazine, Autumn 2009 CARL DJERASSI can remember the moment when he became a writer. His wife, Diane Middlebrook, thought it was a ridiculous idea. Even at 85, slight and snowy-haired, Djerassi is a det­ermined man. Eventually Djerassi got the bound galleys of his book. Diane Middlebrook died of cancer in 2007 and, as Djerassi speaks, her presence grows stronger. Carl Djerassi is a polymath. His latest book, “Four Jews on Parnassus”, is an ima­gined series of debates between Theodor Adorno, Arnold Schönberg, Walter Benjamin and Gershom Scholem, which touches on art, music, philosophy and Jewish identity. The word “polymath” teeters somewhere between Leo­nardo da Vinci and Stephen Fry. “To me, promiscuity is a way of flitting around. Djerassi is right to be suspicious of flitting. Young’s achievements are staggering.

Power law An example power-law graph, being used to demonstrate ranking of popularity. To the right is the long tail, and to the left are the few that dominate (also known as the 80–20 rule). In statistics, a power law is a functional relationship between two quantities, where a relative change in one quantity results in a proportional relative change in the other quantity, independent of the initial size of those quantities: one quantity varies as a power of another. Empirical examples of power laws[edit] Properties of power laws[edit] Scale invariance[edit] One attribute of power laws is their scale invariance. , scaling the argument by a constant factor causes only a proportionate scaling of the function itself. That is, scaling by a constant simply multiplies the original power-law relation by the constant . and , and the straight-line on the log-log plot is often called the signature of a power law. Lack of well-defined average value[edit] A power-law has a well-defined mean over only if for where , and .

Table of mathematical symbols When reading the list, it is important to recognize that a mathematical concept is independent of the symbol chosen to represent it. For many of the symbols below, the symbol is usually synonymous with the corresponding concept (ultimately an arbitrary choice made as a result of the cumulative history of mathematics), but in some situations a different convention may be used. For example, depending on context, the triple bar "≡" may represent congruence or a definition. Each symbol is shown both in HTML, whose display depends on the browser's access to an appropriate font installed on the particular device, and in TeX, as an image. Guide[edit] This list is organized by symbol type and is intended to facilitate finding an unfamiliar symbol by its visual appearance. Basic symbols: Symbols widely used in mathematics, roughly through first-year calculus. Basic symbols[edit] Symbols based on equality sign[edit] Symbols that point left or right[edit] Brackets[edit] Other non-letter symbols[edit]