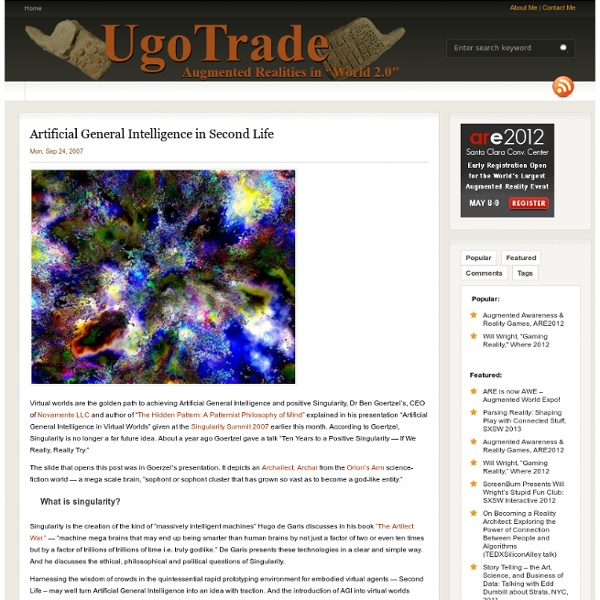 Virtual worlds are the golden path to achieving Artificial General Intelligence and positive Singularity, Dr Ben Goertzel’s, CEO of Novamente LLC and author of “The Hidden Pattern: A Patternist Philosophy of Mind” explained in his presentation “Artificial General Intelligence in Virtual Worlds” given at the Singularity Summit 2007 earlier this month. According to Goertzel, Singularity is no longer a far future idea. About a year ago Goertzel gave a talk “Ten Years to a Positive Singularity — If We Really, Really Try.” The slide that opens this post was in Goerzel’s presentation. It depicts an Archailect, Archai from the Orion’s Arm science-fiction world — a mega scale brain, “sophont or sophont cluster that has grown so vast as to become a god-like entity.” What is singularity? Harnessing the wisdom of crowds in the quintessential rapid prototyping environment for embodied virtual agents — Second Life – may well turn Artificial General Intelligence into an idea with traction. Related:  Digital Live

Metaverse Roadmap: Pathways to the 3D Web Conceptual Framework for Online Identity Roles I just wrapped up a final project for an aesthetics course this semester, the assignment being to create a “Database of the Self.” I chose to make the database as a representation of the roles we play in terms of how we interact with information online. The roles are overlaid on a panarchy, which shows a visualization of adaptive lifecycles. Though the evolution of every idea or meme won’t necessarily follow this specific path, (it may in fact be rhizomatic, with multiple feedback loops), this begins to flesh out what we become as nodes within an enmeshed series of networks. The cycle can be thought to begin with the “Activators,” in the lower right side of image. For an interactive version of the graphic, click here. I found this to be an interesting exercise when thinking about the impact and influence we have on the web, and how information travels. Thanks to @wildcat2030 for inspiration from Friendships in Hyperconnectivity mindmap and to @gavinkeech for visual design. Like this:

The AI Revolution: Our Immortality or Extinction Note: This is Part 2 of a two-part series on AI. Part 1 is here. PDF: We made a fancy PDF of this post for printing and offline viewing. We have what may be an extremely difficult problem with an unknown time to solve it, on which quite possibly the entire future of humanity depends. — Nick Bostrom Welcome to Part 2 of the “Wait how is this possibly what I’m reading I don’t get why everyone isn’t talking about this” series. Part 1 started innocently enough, as we discussed Artificial Narrow Intelligence, or ANI (AI that specializes in one narrow task like coming up with driving routes or playing chess), and how it’s all around us in the world today. This left us staring at the screen, confronting the intense concept of potentially-in-our-lifetime Artificial Superintelligence, or ASI (AI that’s way smarter than any human, across the board), and trying to figure out which emotion we were supposed to have on as we thought about that.← open these So where does that leave us? i.e. Timeline

Virtual Worlds, Avatars, free 3D chat, online meetings - Second Life Official Site The Architecture of Participation by Tim O'Reilly June 2004 I've come to use the term "the architecture of participation" to describe the nature of systems that are designed for user contribution. Larry Lessig's book, Code and Other Laws of Cyberspace, which he characterizes as an extended meditation on Mitch Kapor's maxim, "architecture is politics", made the case that we need to pay attention to the architecture of systems if we want to understand their effects. I immediately thought of Kernighan and Pike's description of the Unix software tools philosophy referred to above. I also recalled an unpublished portion of the interview we did with Linus Torvalds to create his essay for the 1998 book, Open Sources. And of course, the Internet and the World Wide Web have this participatory architecture in spades. In addition, the IETF, the Internet standards process, has a great many similarities with an open source software project. These projects can be seen to have a natural architecture of participation.

Simplicity is key to co-operative robots -- ScienceDaily A way of making hundreds -- or even thousands -- of tiny robots cluster to carry out tasks without using any memory or processing power has been developed by engineers at the University of Sheffield, UK. The team, working in the Sheffield Centre for Robotics (SCentRo), in the University's Faculty of Engineering, has programmed extremely simple robots that are able to form a dense cluster without the need for complex computation, in a similar way to how a swarm of bees or a flock of birds is able to carry out tasks collectively. The work, published April 17, 2014 in the International Journal of Robotics Research, paves the way for robot 'swarms' to be used in, for example, the agricultural industry where precision farming methods could benefit from the use of large numbers of very simple and cheap robots. Each robot uses just one sensor that tells them whether or not they can 'see' another robot in front of them. Video of the swarming robots can be seen at

Second Life Built into the software is a three-dimensional modeling tool based on simple geometric shapes that allows residents to build virtual objects. There is also a procedural scripting language, Linden Scripting Language, which can be used to add interactivity to objects. Sculpted prims (sculpties), mesh, textures for clothing or other objects, animations, and gestures can be created using external software and imported. The Second Life terms of service provide that users retain copyright for any content they create, and the server and client provide simple digital rights management (DRM) functions.[3] However, Linden Lab changed their terms of service in August 2013, to be able to use user-generated content for any purpose. The new terms of service prevents users from using textures from 3rd-party texture services, as some of them pointed out explicitly.[5] Users can also photograph in Second Life with the camera technology the client programs have. History[edit] 10th anniversary[edit]

13 Community Role Archetypes (Which One Are You?) Decker and I had a blast putting this together – It’s a breakdown of some archetypical roles in community we’ve noticed over the years, along with the specific people in our community who fill those roles. More on this below. (Download a larger-font, editable version here) (Download a larger-font, editable version here) Assertion #1 – Everyone has essential gifts to bring to a community.Assertion #2 – Recognizing and Celebrating each person’s gifts is an essential aspect of Community Leadership. And, while the Art of Deeply Seeing people ultimately defies any nice neat categories we can come up with, these possibilities can definitely get your wheels turning. Question: What combination of these types do you see in yourself? You may look at these roles and be struck by how little of ANY of these roles are actually being filled by the people in your social circles. And once you’ve left your comment, check out our new training here: Authentic Community Leadership

32 Amazing Websites That Will Actually Save You Money Tiny robots inspired by pine cones -- ScienceDaily Most efforts to develop bio-inspired robots center on mimicking the motions of animals: but plants move too -- even if most of their motions are so slow they can't be detected by the naked eye. The mechanism involved in plant movement is much simpler than that of animals using muscles. To generate motion, plants and some seeds -- such as mimosa leaves, Venus flytraps and pine cones -- simply harness the supply or deprival of water from plant tissues. The future of bio-inspired engineering or robotics will greatly benefit from lessons learned from plants, according to a group of Seoul National University researchers. During the American Physical Society's 68th Annual Meeting of the Division of Fluid Dynamics, Nov. 22-24, 2015, in Boston, they will share details about how studying plants enabled them to create tiny robots powered exclusively by changes in humidity. If environmental humidity increases, the bilayer bends from changes in length-wise swelling. Sounds too easy, right?

Virtual selves can help boost better real world health, exercise habits -- ScienceDaily Customizing an avatar to better resemble its human user may lead to improved health and exercise behaviors, according to a team of researchers. "There's an emerging body of research that suggests that avatars in virtual environments are an effective way to encourage people to be more healthy," said T. Franklin Waddell, a doctoral candidate in mass communications, Penn State. "What our study was trying to do was finding out why avatars have these effects and also to determine if avatars can encourage people to be healthy, particularly encourage those who might have rather low interest in exercising and healthy eating." "Our other research has shown that customizing avatars can make users feel more agentic and take charge of their welfare," said S. The act of customizing an avatar seems to create a personal connection between people and their virtual alter egos and sticks with them in real life, said Sundar.