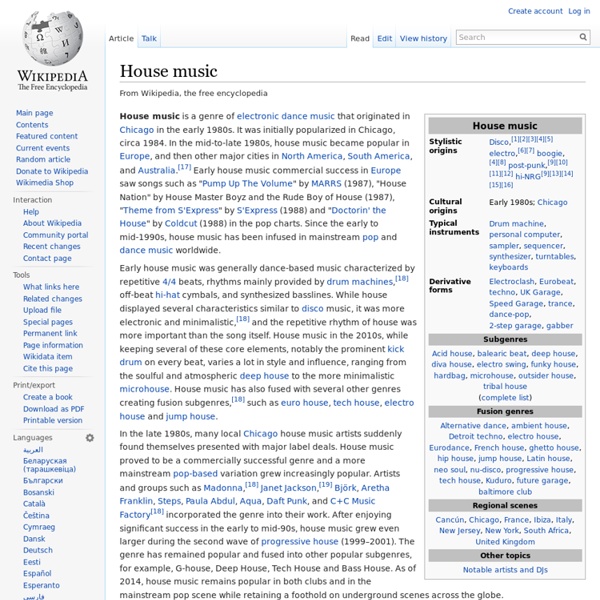 Influences and precursors[edit] Rachel Cain, co-founder of an influential Trax Records, was previously involved in the burgeoning punk scene and cites industrial (another Chicago originating music creation) and post-punk record store Wax Trax! Records as an important connection between the ever-changing underground sounds of Chicago. As most proto-house DJs were primarily stuck to playing their conventional ensamble of dance records, Frankie Knuckles and Ron Hardy, two influential pioneers of house music, were known for their out-of-bounds behavior. The former, credited as "the Godfather of House," worked primarily with early disco music with a hint of new and different music (whether it was post-punk or post-disco)[26] but still enjoying a variety of music, while the latter produced unconventional DIY mixtapes which he later played straight-on in the music club Muzic Box, boiling with raw energy. Origins (1980s)[edit] Chicago house[edit] Main article: Chicago house Chip E.' Related:  Musique

Electronic dance music Electronic dance music (also known as EDM, dance music,[1] club music,[2] or simply dance) is a broad range of percussive electronic music genres produced primarily for dance-based entertainment environments such as nightclubs, raves, and festivals. The music is largely produced for playback by disc jockeys (DJs) and is generally used in the context of a live DJ mixes where the DJ creates a seamless selection of tracks by segueing from one recording to the next.[3] The term "electronic dance music" and the acronym "EDM" was adopted by the U.S. music industry and music press as a buzzword to describe the increasingly commercial American electronic music scene that developed in the 2000s. In this context, EDM does not refer to a specific genre, but is an umbrella term for a number of popular genres, including house, dubstep, trance, and trap.[4][5][6] History[edit] Acid house and Rave[edit] North American commercialization of EDM[edit] Criticism of commercial EDM[edit] Terminology[edit]

Music genre A music genre is a conventional category that identifies pieces of music as belonging to a shared tradition or set of conventions.[1] It is to be distinguished from musical form and musical style, although in practice these terms are sometimes used interchangeably.[2][not in citation given] Among the criteria often used to classify musical genres are: the trichotomy of art, popular, and traditional; time period; regional and national origins; technique and instrumentation; fusional origins; and social function.[citation needed] The art/popular/traditional distinction[edit] Musicologists have sometimes classified music according to a trichotomic distinction such as Philip Tagg's "axiomatic triangle consisting of 'folk', 'art' and 'popular' musics".[6] He explains that each of these three is distinguishable from the others according to certain criteria.[6] Art music[edit] Popular music[edit] Main article: Popular music Traditional music[edit] Critics of the axiomatic triangle[edit] See also[edit]

Fat Freddy's Drop Fat Freddy’s Drop are a New Zealand seven-piece band from Wellington, whose musical style has been characterised as any combination of dub, reggae, soul, jazz, rhythm and blues, and techno. Originally a jam band formed in the late 1990s by musicians from other bands in Wellington, Fat Freddy’s Drop gradually became its members' sole focus. Band members continued playing with their other respective groups—The Black Seeds, TrinityRoots, Bongmaster, and others—for much of their 13-year career. History[edit] Formation: 1999–2001[edit] That same year, Faiumu founded the independent music label The Drop with the help of his partner Nicole, and money from private investors. The group organised several informal jam sessions in 2000, inviting local musicians to play with them at Faiumu's home. Live at the Matterhorn and singles: 2001–2004[edit] The now seven-member Fat Freddy’s Drop, sometimes calling themselves the "seven headed soul monster",[7] continued to play live at clubs and festivals.

Garden State (soundtrack) The music that accompanied the film was hand-picked by Zach Braff. Commenting on the selections, Braff said that "Essentially, I made a mix CD with all of the music that I felt was scoring my life at the time I was writing the screenplay."[5] The film’s budget limitations meant that obtaining all the songs Braff wanted for the film proved difficult, but Braff felt that the soundtrack was so integral to the script, he sent a copy of it with every request he sent out. The music in the film features a number of indie-rock artists, notably The Shins. On the DVD menu the song featured is "Motorcycle Ride with Sam" by Chad Fischer. Zach Braff received a Grammy Award in 2005 for Best Compilation Soundtrack Album for a Motion Picture, Television or Other Visual Media. The album has sold over 1.3 million copies and has been certified as platinum by the Recording Industry Association of America.[7][8]

Nu jazz Nu jazz is a genre of contemporary electronic music. The term was coined in the late 1990s to refer to music that blends jazz elements with other musical styles, such as funk, soul, electronic dance music, and free improvisation.[1] Also written nü-jazz or NuJazz, it is sometimes called electronic jazz, electro-jazz, electric jazz, e-jazz, jazztronica, jazz house, phusion, neo-jazz, future jazz or Jazz-hop and electro-lounge. According to critic Tony Brewer, “Nu Jazz is to (traditional) Jazz what punk or grunge was to Rock, of course. [...] Overview[edit] Nu jazz typically ventures farther into the electronic territory than does its close cousin, acid jazz (or groove jazz), which is generally closer to earthier funk, soul, and rhythm and blues, although releases from noted groove & smooth jazz artists such as the Groove Collective, and Pamela Williams blur the distinction between the styles. History[edit] Notable artists[edit] See also[edit] Sources[edit] References[edit] External links[edit]

New jack swing History[edit] The term "new jack swing" was coined in a 1988 Village Voice profile of Teddy Riley by Barry Michael Cooper.[6] "New Jack" was a slang term used in a song by Grandmaster Caz of the Cold Crush Brothers, and "swing" was intended by Cooper to draw an "analogy between the music played at the speakeasies of F. Scott Fitzgerald's time to the crackhouses of Teddy Riley's time."[7] Music website VH1.com notes that while in the 2000s, "hip-hop and R&B are kissing cousins," in the early 1980s, "the two genres were seldom mentioned in the same breath." New jack swing is mellifluously soulful solo or harmonizing vocals addressing romantic and sexual themes and lyrics, sung over rhythms and "street" beats derived from urban musical influences. Adaptations[edit] In October 2004, a variety of classic new jack swing tracks are used in the popular video game Grand Theft Auto: San Andreas. Influences[edit] Notable songs[edit]