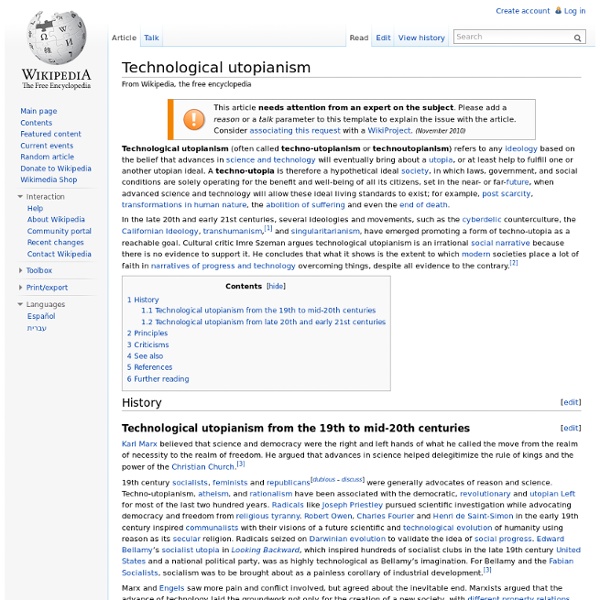 In the late 20th and early 21st centuries, several ideologies and movements, such as the cyberdelic counterculture, the Californian Ideology, transhumanism,[1] and singularitarianism, have emerged promoting a form of techno-utopia as a reachable goal. Cultural critic Imre Szeman argues technological utopianism is an irrational social narrative because there is no evidence to support it. He concludes that what it shows is the extent to which modern societies place a lot of faith in narratives of progress and technology overcoming things, despite all evidence to the contrary.[2] History[edit] Technological utopianism from the 19th to mid-20th centuries[edit] Karl Marx believed that science and democracy were the right and left hands of what he called the move from the realm of necessity to the realm of freedom. Some technological utopians promoted eugenics. H.G. The horrors of the 20th century - communist and fascist dictatorships, world wars - caused many to abandon optimism.

Extropianism [W] Extropianism, also referred to as the philosophy of Extropy, is an evolving framework of values and standards for continuously improving the human condition. Extropians believe that advances in science and technology will some day let people live indefinitely. An extropian may wish to contribute to this goal, e.g. by doing research and development or volunteering to test new technology. Extropianism describes a pragmatic consilience of transhumanist thought guided by a proactionary approach to human evolution and progress. Originated by a set of principles developed by Dr. Extropy[edit] A more recent definition of Extropy has been provided by Kevin Kelly, senior maverick at Wired magazine.[5] "Extropy is neither wave, nor particle, nor pure energy. In the philosophy of digital probabilistic physics, the extropy of a physical system is defined to be the self-information of the Markov chain probability of the physical system at a moment in time. The Extropy Institute[edit] Extropism[edit]

Extropian and Transhuman Web Sites Home > Introduction > Possible Futures > Extropianism > Web Sites Drop down the page to the sites Last Updated: Saturday, 27-Jun-2009 22:35:47 PDT Some terms, from the Extropian Lextropicon EXTROPY -- The extent of a system's intelligence, information, order, vitality, and capacity for improvement. EXTROPIA -- A conception of evolving communities embodying values of Boundless Expansion, Self-Transformation, Dynamic Optimism, Intelligent Technology, and Spontaneous Order. EXTROPIAN -- One who seeks to overcome human limits, live indefinitely long, become more intelligence, and more self-creating. EXTROPIANISM -- The evolving transhumanist philosophy of extropy. TRANSHUMAN -- Someone actively preparing for becoming posthuman. TRANSHUMANISM -- Philosophies of life that seek the continuation and acceleration of the evolution of intelligent life beyond its currently human form and human limitations by means of science and technology, guided by life-promoting principles and values. The sites: