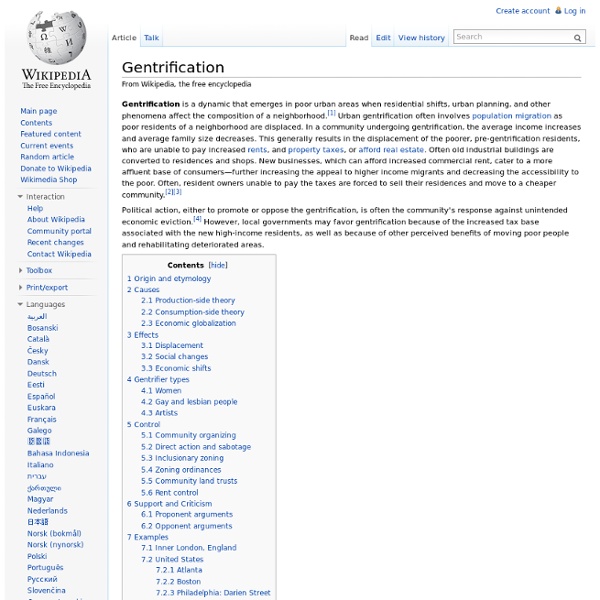 Gentrification is a shift in an urban community toward wealthier residents and/or businesses and increasing property values.[1] Gentrification is typically the result of investment in a community by local government, community activists, or business groups, and can often spur economic development, attract business, and lower crime rates. In addition to these potential benefits, gentrification can lead to population migration, which involves poorer residents being displaced by wealthier newcomers. In a community undergoing gentrification, the average income increases and average family size decreases. Political action is often the community's response, either to promote the gentrification or oppose economic eviction.[4] Local governments may favor gentrification because of the increased tax base associated with the new high-income residents, as well as other perceived benefits of moving poor people and rehabilitating deteriorated areas. Origin and etymology[edit] Causes[edit] Related:  House music

Modernism Hans Hofmann, "The Gate", 1959–1960, collection: Solomon R. Guggenheim Museum. Hofmann was renowned not only as an artist but also as a teacher of art, and a modernist theorist both in his native Germany and later in the U.S. Modernism is a philosophical movement that, along with cultural trends and changes, arose from wide-scale and far-reaching transformations in Western society in the late 19th and early 20th centuries. History[edit] Beginnings: the 19th century[edit] According to one critic, modernism developed out of Romanticism's revolt against the effects of the Industrial Revolution and bourgeois values: "The ground motive of modernism, Graff asserts, was criticism of the nineteenth-century bourgeois social order and its world view […] the modernists, carrying the torch of romanticism".[5][6][7] While J. However, the Industrial Revolution continued. The beginnings of modernism in France[edit] Explosion, early 20th century to 1930[edit]

Game theory Game theory is the study of strategic decision making. Specifically, it is "the study of mathematical models of conflict and cooperation between intelligent rational decision-makers."[1] An alternative term suggested "as a more descriptive name for the discipline" is interactive decision theory.[2] Game theory is mainly used in economics, political science, and psychology, as well as logic, computer science, and biology. The subject first addressed zero-sum games, such that one person's gains exactly equal net losses of the other participant or participants. Modern game theory began with the idea regarding the existence of mixed-strategy equilibria in two-person zero-sum games and its proof by John von Neumann. This theory was developed extensively in the 1950s by many scholars. Representation of games[edit] Most cooperative games are presented in the characteristic function form, while the extensive and the normal forms are used to define noncooperative games. Extensive form[edit] [edit]

Garden city movement Ebenezer Howard's 3 magnets diagram which addressed the question 'Where will the people go?', the choices being 'Town', 'Country' or 'Town-Country' The garden city movement is a method of urban planning that was initiated in 1898 by Sir Ebenezer Howard in the United Kingdom. Garden cities were intended to be planned, self-contained communities surrounded by "greenbelts", containing proportionate areas of residences, industry and agriculture. Inspired by the Utopian novel Looking Backward and Henry George's work Progress and Poverty, Howard published his book To-morrow: a Peaceful Path to Real Reform in 1898 (which was reissued in 1902 as Garden Cities of To-morrow). Early development[edit] Howard’s To-morrow: a peaceful path to real reform sold enough copies to result in a second edition, Garden Cities of To-morrow. To build a garden city, Howard needed money to buy land. Even until the end of the 1930s, Letchworth and Welwyn remained as the only existing garden cities.

Pundit (expert) A pundit (sometimes called Talking Head) is someone who offers to mass media his or her opinion or commentary on a particular subject area (most typically political analysis, the social sciences, technology or sport) on which they are knowledgeable (or can at least appear to be knowledgeable), or considered a scholar in said area. The term has been increasingly applied to popular media personalities.[1] In certain cases, it may be used in a derogatory manner as well, as the political equivalent of ideologue. Origins[edit] The term originates from the Sanskrit term pandit, (paṇḍitá), meaning "learned" (see also Pandit). Current use[edit] In Anglophone countries[edit] In the English-speaking West, pundits write signed articles in print media (blurbs included), and appear on radio, television, or the internet with opinions on current events. At the same time, many people who appear as pundits are recognized for having serious academic and scholarly experience in the subject at hand.

Commuter town A commuter town, also known as an exurb, bedroom community (Canada usage, bedroom town or bedroom suburb U.S. usage), a dormitory town or dormitory suburb (UK Commonwealth and Ireland usage), or less commonly a dormitory village (UK Commonwealth and Ireland), suggests that residents sleep in these neighborhoods, but normally work elsewhere; they also suggest that these communities have little commercial or industrial activity beyond a small amount of retail, oriented toward serving the residents. Distinction between suburbs and commuter towns[edit] Camarillo, California, a typical U.S. bedroom community made up almost entirely of homes, schools and retail outlets. Suburbs and commuter towns are often the same place, but sometimes not. Causes[edit] Commuter towns can arise for a number of different reasons. Often, however, commuter towns form when workers in a region cannot afford to live where they work and must seek residency in another town with a lower cost of living. Effects[edit]

Detroit Detroit /dɨˈtrɔɪt/[7] is the most populous city in the U.S. state of Michigan, and is also the seat of Wayne County, the most populous county in the state and the largest city on the United States-Canada border. It is a primary business, cultural, financial and transportation center in the Metro Detroit area, a region of 5.2 million people, and serves as a major port on the Detroit River connecting the Great Lakes system to the Saint Lawrence Seaway. It was founded on July 24, 1701, by the French explorer and adventurer Antoine Laumet de La Mothe, sieur de Cadillac. The Detroit area emerged as a significant metropolitan region within the United States as construction of a regional freeway system was completed in the 1950s and 1960s. History[edit] The region's fur trade was an important economic activity. During the French and Indian War (1760), British troops gained control and shortened the name to Detroit. From 1805 to 1847, Detroit was the capital of Michigan. 20th century[edit]

Social psychology (sociology) Sociological social psychology was born in 1902 with the landmark study by sociologist Charles Horton Cooley, Human Nature and the Social Order, which presented Cooley's concept of the looking glass self. The first textbook in social psychology by a sociologist appeared in 1908 — Social Psychology by Edward Alsworth Ross. The area's main journal was founded as Sociometry by Jacob L. Moreno in 1937. The journal's name changed to Social Psychology in 1978, and to Social Psychology Quarterly in 1979. In the 1920s W. One of the major currents of theory in this area sprang from work by philosopher and sociologist George Herbert Mead at the University of Chicago from 1894 forward. Contemporary symbolic interactionism originated out of ideas of George Herbert Mead and Max Weber. Social exchange theory emphasizes the idea that social action is the result of personal choices made in order to maximize benefits and minimize costs. Social Influence is a factor in every individual's life.

Urban area Urban areas with at least one million inhabitants in 2006. By the end of the twentieth century, 47% of the world's population lived in cities, a figure which has risen from 3% since 1800. World map showing percent of population living in an urban environment. There are about 7.1 billion people living on the planet.[1] In 2009, the number of people living in urban areas (3.42 billion) surpassed the number living in rural areas (3.41 billion) and since then the world has become more urban than rural.[2] This is the first time that the majority of the world's population lives in a city.[3] Urban areas are created and further developed by the process of urbanization. Unlike an urban area, a metropolitan area includes not only the urban area, but also satellite cities plus intervening rural land that is socio-economically connected to the urban core city, typically by employment ties through commuting, with the urban core city being the primary labor market. Definitions[edit] Argentina[edit]

Electronic dance music Electronic dance music (also known as EDM, dance music,[1] club music,[2] or simply dance) is a broad range of percussive electronic music genres produced primarily for dance-based entertainment environments such as nightclubs, raves, and festivals. The music is largely produced for playback by disc jockeys (DJs) and is generally used in the context of a live DJ mixes where the DJ creates a seamless selection of tracks by segueing from one recording to the next.[3] The term "electronic dance music" and the acronym "EDM" was adopted by the U.S. music industry and music press as a buzzword to describe the increasingly commercial American electronic music scene that developed in the 2000s. In this context, EDM does not refer to a specific genre, but is an umbrella term for a number of popular genres, including house, dubstep, trance, and trap.[4][5][6] History[edit] Acid house and Rave[edit] North American commercialization of EDM[edit] Criticism of commercial EDM[edit] Terminology[edit]

Chicago school (sociology) In sociology and later criminology, the Chicago School (sometimes described as the Ecological School) was the first major body of works emerging during the 1920s and 1930s specialising in urban sociology, and the research into the urban environment by combining theory and ethnographic fieldwork in Chicago, now applied elsewhere. While involving scholars at several Chicago area universities, the term is often used interchangeably to refer to the University of Chicago's sociology department—one of the oldest and one of the most prestigious. Following World War II, a "Second Chicago School" arose whose members used symbolic interactionism combined with methods of field research, to create a new body of work.[1] This was one of the first institutions to use quantitative methods in criminology. The Chicago School is best known for its urban sociology and for the development of the symbolic interactionist approach. The work of Frederic E. Clements (1916) was particularly influential.