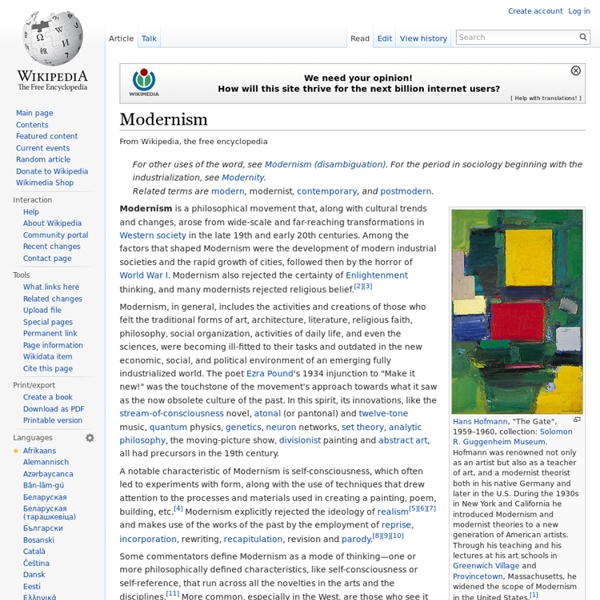 Hans Hofmann, "The Gate", 1959–1960, collection: Solomon R. Guggenheim Museum. Hofmann was renowned not only as an artist but also as a teacher of art, and a modernist theorist both in his native Germany and later in the U.S. Modernism is a philosophical movement that, along with cultural trends and changes, arose from wide-scale and far-reaching transformations in Western society in the late 19th and early 20th centuries. History[edit] Beginnings: the 19th century[edit] According to one critic, modernism developed out of Romanticism's revolt against the effects of the Industrial Revolution and bourgeois values: "The ground motive of modernism, Graff asserts, was criticism of the nineteenth-century bourgeois social order and its world view […] the modernists, carrying the torch of romanticism".[5][6][7] While J. However, the Industrial Revolution continued. The beginnings of modernism in France[edit] Explosion, early 20th century to 1930[edit]

Postmodernism Philosophical and artistic movement Initially emerging from a mode of literary criticism, postmodernism developed in the mid-twentieth century as a rejection of modernism[8][9][10][11] and has been observed across many disciplines.[12][13] Postmodernism is associated with the disciplines deconstruction and post-structuralism.[4] Various authors have criticized postmodernism as promoting obscurantism, as abandoning Enlightenment rationalism and scientific rigor, and as adding nothing to analytical or empirical knowledge.[14][15][16][17][18][19] Definition[edit] Origins of term[edit] In 1942 H. In 1926, Bernard Iddings Bell, president of St. Author Peter Drucker suggested the transformation into a post-modern world that happened between 1937 and 1957 and described it as a "nameless era" characterized as a shift to a conceptual world based on pattern, purpose, and process rather than a mechanical cause. History[edit] Theories and derivatives[edit] Structuralism and post-structuralism[edit] H.

Postmodern art Postmodern art is a body of art movements that sought to contradict some aspects of modernism or some aspects that emerged or developed in its aftermath. In general, movements such as Intermedia, Installation art, Conceptual Art and Multimedia, particularly involving video are described as postmodern. There are several characteristics which lend art to being postmodern; these include bricolage, the use of words prominently as the central artistic element, collage, simplification, appropriation, performance art, the recycling of past styles and themes in a modern-day context, as well as the break-up of the barrier between fine and high arts and low art and popular culture.[1][2] Use of the term[edit] The predominant term for art produced since the 1950s is "contemporary art". As well as describing certain tendencies of contemporary art, postmodern has also been used to denote a phase of modern art. As with all uses of the term postmodern there are critics of its application. Dada[edit]

Marcel Duchamp Marcel Duchamp (French: [maʁsɛl dyʃɑ̃]; 28 July 1887 – 2 October 1968) was a French-American painter, sculptor, chess player, and writer whose work is associated with Dadaism[1][2] and conceptual art,[3] although not directly associated with Dada groups. Duchamp is commonly regarded, along with Pablo Picasso and Henri Matisse, as one of the three artists who helped to define the revolutionary developments in the plastic arts in the opening decades of the twentieth century, responsible for significant developments in painting and sculpture.[4][5][6][7] Duchamp has had an immense impact on twentieth-century and twenty first-century art. By World War I, he had rejected the work of many of his fellow artists (like Henri Matisse) as "retinal" art, intended only to please the eye. Instead, Duchamp wanted to put art back in the service of the mind.[8] Importance[edit] Early life[edit] Of Eugene and Lucie Duchamp's seven children, one died as an infant and four became successful artists.

Vorticism - Wikipedia Origins[edit] The name Vorticism was given to the movement by Ezra Pound in 1913,[1] although Lewis, usually seen as the central figure in the movement, had been producing paintings in the same style for a year or so previously.[4] Participants[edit] The eleven signatories of the Vorticist manifesto were: BLAST[edit] The Vorticists published two issues of the literary magazine BLAST, in June 1914 and July 1915 which Lewis edited.[5] It contained work by Ezra Pound and T. Demise and legacy[edit] Paintings and sculpture shown at the Rebel Art Centre in 1914, before the formation of the Vorticist Group was experimental work by Lewis, Wadsworth, Shakespear and others, using angular simplification and abstraction. After this, the movement broke up, largely due to the onset of World War I and public apathy towards the work. See also[edit] Notes[edit] References[edit] Antcliffe, Mark, and Green, Vivien (eds.). External links[edit]

Abstract expressionism Style[edit] Technically, an important predecessor is surrealism, with its emphasis on spontaneous, automatic or subconscious creation. Jackson Pollock's dripping paint onto a canvas laid on the floor is a technique that has its roots in the work of André Masson, Max Ernst and David Alfaro Siqueiros. Another important early manifestation of what came to be abstract expressionism is the work of American Northwest artist Mark Tobey, especially his "white writing" canvases, which, though generally not large in scale, anticipate the "all-over" look of Pollock's drip paintings. Mark Tobey, Canticle, 1954. Abstract expressionism has many stylistic similarities to the Russian artists of the early 20th century such as Wassily Kandinsky. Why this style gained mainstream acceptance in the 1950s is a matter of debate. Although the abstract expressionist school spread quickly throughout the United States, the major centers of this style were New York City and the San Francisco Bay area of California.

Jonathan Jones on how Duchamp's urinal revolutionised modern culture The object in Tate Modern is white and shiny, cast in porcelain, its slender upper part curving outward as it descends to a receiving bowl - into which I urinate. It's just a brief walk from here in the fifth-floor men's loo to Marcel Duchamp's Fountain, an object sealed in a plastic display case on a plinth that is nevertheless almost identical to the receptacle into which I've just pissed. This museum treasure is no more or less than Duchamp described it to his sister in a letter of spring 1917: une pissotière en porcelaine. The eminent New Yorkers who ran the American Society of Independent Artists decided in April 1917 that it wasn't. The next month, a little magazine called The Blind Man, which was co-edited by Duchamp, defended Mr Mutt's Fountain: "Whether Mr Mutt with his own hands made the fountain or not has no importance. These words resonate as excitingly, provocatively, philosophically today as they did in the early 20th century. Duchamp grew up with art.

World War I - Wikipedia World War I (WWI or WW1), also known as the First World War, or the Great War, was a global war centred in Europe that began on 28 July 1914 and lasted until 11 November 1918. More than 70 million military personnel, including 60 million Europeans, were mobilised in one of the largest wars in history. Over 9 million combatants and 7 million civilians died as a result of the war (including the victims of a number of genocides), a casualty rate exacerbated by the belligerents' technological and industrial sophistication, and the tactical stalemate caused by trench warfare, a grueling form of warfare in which the defender held the advantage. It was one of the deadliest conflicts in history, and paved the way for major political changes, including revolutions in many of the nations involved. The trigger for the war was the assassination of Archduke Franz Ferdinand of Austria, heir to the throne of Austria-Hungary, by Yugoslav nationalist Gavrilo Princip in Sarajevo on 28 June 1914. Prelude

Suffragette Suffragettes were members of women's organization (right to vote) movements in the late 19th and early 20th century, particularly in the United Kingdom and United States. Suffragist is a more general term for members of suffrage movements, whether radical or conservative, male or female. The term "suffragette" is particularly associated with activists in the British women's suffrage movement in the early 20th century, whose demonstrations included chaining themselves to railings and setting fire to mailbox contents. One woman, Emily Davison, died at the Epsom Derby. It is unsure what she was trying to achieve when she was run down by the King's horse. Many suffragettes were imprisoned in Holloway Prison in London, and were force-fed after going on hunger strike. Origins[edit] The term "suffragette" was first used as a term of derision by the journalist Charles E. Suffragists marching in New York, 1915 Early 20th century in the UK[edit] Imprisonment[edit] Hunger strikes[edit] Legislation[edit]