Kristen Wolfe: Dear Customer Who Stuck Up For His Little Brother 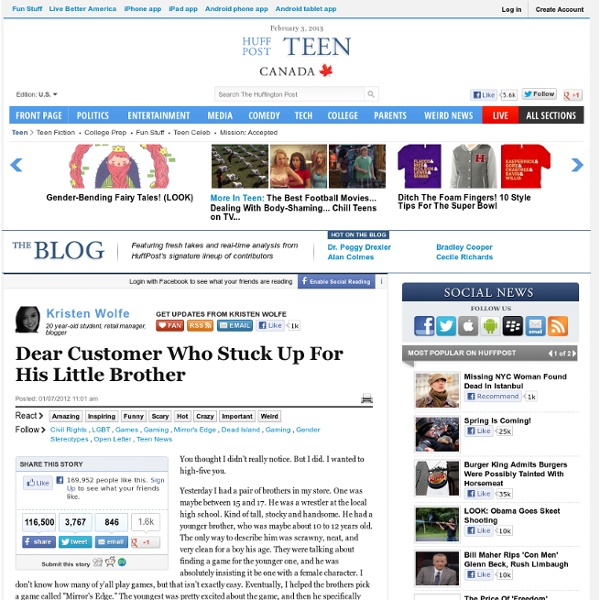 You thought I didn't really notice. But I did. I wanted to high-five you. Yesterday I had a pair of brothers in my store. One was maybe between 15 and 17. The boys had been taking awhile, so their father eventually came in. That's when big brother stepped in. They checked out and left, and all I can think is how awesome big brother is, how sweet little brother is, and how Dad ought to be ashamed for trying to make his son any other way.

NBA player Jason Collins says he is gay - The Magazine "I'm a 34-year-old NBA center. I'm black. And I'm gay," says Jason Collins. Kwaku Alston/For Sports Illustrated This story appears in the May 6, 2013, issue of Sports Illustrated. I'm a 34-year-old NBA center. I didn't set out to be the first openly gay athlete playing in a major American team sport. My journey of self-discovery and self-acknowledgement began in my hometown of Los Angeles and has taken me through two state high school championships, the NCAA Final Four and the Elite Eight, and nine playoffs in 12 NBA seasons. PHOTO GALLERY: Jason Collins through the years I've played for six pro teams and have appeared in two NBA Finals. Jason Collins played with the Celtics and Wizards this season, his 12th in the NBA. Andrew D. Now I'm a free agent, literally and figuratively. Why am I coming out now? The first relative I came out to was my aunt Teri, a superior court judge in San Francisco. When I was younger I dated women. No one wants to live in fear. Peter Foley/EPA

A Teen's Brave Response to "I'm Christian, Unless You're Gay" I received the following email today in response to my post I’m Christian, Unless You’re Gay. I had decided a couple months ago that it was time to let the whole thing rest, but this response was so powerful, I couldn’t not share it with you all. It was from a woman who simply called herself, “One proud mom.” Hello Mr. Pearce,I am the Christian mother of a 15 year old teenage boy and about a month ago he came home from school with a copy of your article “I’m Christian, unless you’re gay”. The teacher gave his class a homework assignment to read it and write a 500 word essay about “what it meant to them”.He came home and showed me your article and asked me what I thought about it.

brave response to " I'm Christian, Unless You're GAY " - Adventist Online I received the following email today in response to my post I’m Christian, Unless You’re Gay. I had decided a couple months ago that it was time to let the whole thing rest, but this response was so powerful, I couldn’t not share it with you all. It was from a woman who simply called herself, “One proud mom.” Hello Mr. Whew. If you think you can’t make a difference, you are wrong.

Pope Francis met with openly gay couple — and unlike Kim Davis, who ambushed him, he did so intentionally Pope Francis met with a gay couple the day before he met with same-sex marriage opponent Kim Davis, CNN’s Daniel Burke reports. Yayo Grassi and his partner, Iwan — old friends of the pope from Argentina — visited the pontiff and were greeted with warm hugs. In an interview with CNN, Grassi said that “three weeks before the trip, he called me on the phone and said he would love to give me a hug.” Unlike the publicity stunt manufactured by Kim Davis, her lawyers, and elements within the church hostile to Francis’ agenda, this meeting was both deliberate and purposive. Referring to the Vatican’s statement about Davis, in which Reverend Federico Lombardi said that “the only real audience granted by the Pope at the nunciature was with one of his former students and his family,” Grassi said “that was me.” The pope is aware of Grassi’s sexuality, but “he has never been judgmental. “Obviously he is the pastor of the church and he has to follow the church’s teachings,” Grassi continued.