BigML.com is Machine Learning for everyone 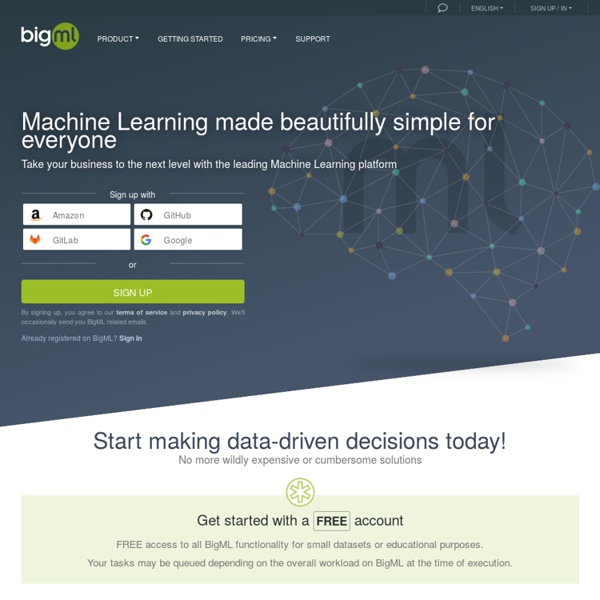 A Neural Network Playground Um, What Is a Neural Network? It’s a technique for building a computer program that learns from data. It is based very loosely on how we think the human brain works. First, a collection of software “neurons” are created and connected together, allowing them to send messages to each other. Next, the network is asked to solve a problem, which it attempts to do over and over, each time strengthening the connections that lead to success and diminishing those that lead to failure. For a more detailed introduction to neural networks, Michael Nielsen’s Neural Networks and Deep Learning is a good place to start.

1-click Data Discovery - RunAbove Who said Big Data has to be difficult? This free LAB provides ready-to-use stacks to test and manipulate to understand the specific roles of leading data-oriented Open-Source projects. From raw collection to analysis and data visualization, all components are already integrated! Each stack includes a sample data set and a step-by-step tutorial to import your own data! Reset or switch to any stack whenever you want.

Systems - Background In the past years a new aspect of brain research received more and more attention. "Computational Neuroscience" is not so much about the biological and biochemical characteristics of neurons as about their computational logistics. Very ambitious projects like Henry Markram's Blue Brain Project try to disclose the brains functioning by reconstructing it at the synapse-level in the form of a computer model. The Blue Brain tries to model what is called a cortical column, a repetitive structure observed in all mammal brains. These columns were first described by Vernon B. Mountcastle as "Hypercolumns".

Here’s how a neural network works Daniel Smilkov and Shan Carter at Google put together this interactive learner for how a neural network works. In case you’re unfamiliar with the method: It’s a technique for building a computer program that learns from data. It is based very loosely on how we think the human brain works. First, a collection of software “neurons” are created and connected together, allowing them to send messages to each other. Artificial neural network An artificial neural network is an interconnected group of nodes, akin to the vast network of neurons in a brain. Here, each circular node represents an artificial neuron and an arrow represents a connection from the output of one neuron to the input of another. For example, a neural network for handwriting recognition is defined by a set of input neurons which may be activated by the pixels of an input image. After being weighted and transformed by a function (determined by the network's designer), the activations of these neurons are then passed on to other neurons. This process is repeated until finally, an output neuron is activated. This determines which character was read.

Weka 3 - Data Mining with Open Source Machine Learning Software in Java Weka is a collection of machine learning algorithms for data mining tasks. The algorithms can either be applied directly to a dataset or called from your own Java code. Weka contains tools for data pre-processing, classification, regression, clustering, association rules, and visualization. It is also well-suited for developing new machine learning schemes. Found only on the islands of New Zealand, the Weka is a flightless bird with an inquisitive nature.

Open Source: the Meritocracy vs the Circle of Trust There has been this idea running around the back of my head for a while, and it's only now that it is starting to crystalize into something that I can express. When we look at Open Source projects, we see that there is a hierarchy of involvement. There are different levels at which you can be involved, and at each higher level, there will be less and less individuals. For now I am going to divide involvement up like this: Different Open Source projects but different barriers at different points. For example: (Note: I'm not going to even try and pretend that the above is a complete list of road-blocks) Different people view success of Open Source projects differently.

Home Page of Geoffrey Hinton I now work part-time for Google as a Distinguished Researcher and part-time for the University of Toronto as a Distinguished Emeritus Professor. For much of the year, I work at the University from 9.30am to 1.30pm and at the Google Toronto office at 111 Richmond Street from 2.00pm to 6.00pm. I also spend several months per year working full-time for Google in Mountain View, California.

Intelligence matters: Artificial intelligence and algorithms Welcome back. Please sign in. Welcome back. {* #userInformationForm *} {* traditionalSignIn_emailAddress *} {* traditionalSignIn_password *} {* traditionalSignIn_signInButton *} 10 open source e-learning projects to watch - Collaboration - Open Source As corporate and government organizations embrace the Web for delivering more education and training programs, a wealth of free and open source e-learning applications will help lower the barrier to entry. TechWorld looks at the options. ATutor ATutor is a Web-based learning content management system (LCMS) designed for accessibility and adaptability by the Adaptive Technology Resource Centre at the University of Toronto. ATutor claims to be modular for new looks and functionality.

iplab - Image Processing Lab Image Processing Lab is an image processing application written in C#, which includes different filters and tools to analyze images available in AForge.NET Framework. The following filters are available in the IPLab application: It is possible to create (save and load) your own convolution filters or filters based on standard mathematical morphology operators. Colorized grid makes it very convenient to work with custom convolution filters. Where Computers Defeat Humans, and Where They Can’t Photo ALPHAGO, the artificial intelligence system built by the Google subsidiary DeepMind, has just defeated the human champion, Lee Se-dol, four games to one in the tournament of the strategy game of Go. Why does this matter? After all, computers surpassed humans in chess in 1997, when IBM’s Deep Blue beat Garry Kasparov. So why is AlphaGo’s victory significant?

How sense and respond organizations differ from make and sell organizations. S&R as Post-Industrial Managerial Paradigm An adaptive management paradigm is the missing element in current attempts to transform businesses into adaptive organizations. Because adaptive behavior is typically unplanned—often ad hoc– it is intrinsically inefficient and therefore persistently undermined by the existing efficiency-centric management paradigm. The metrics and practices fostered by this industrial age model frustrate attempts to empower people, inculcate a customer orientation, leverage adaptive technologies, and respond to unanticipated change.