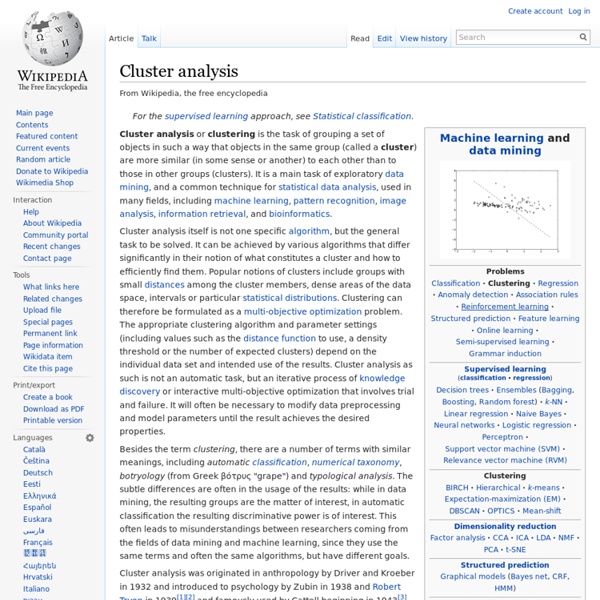 The result of a cluster analysis shown as the coloring of the squares into three clusters. Cluster analysis or clustering is the task of grouping a set of objects in such a way that objects in the same group (called a cluster) are more similar (in some sense or another) to each other than to those in other groups (clusters). It is a main task of exploratory data mining, and a common technique for statistical data analysis, used in many fields, including machine learning, pattern recognition, image analysis, information retrieval, and bioinformatics. Besides the term clustering, there are a number of terms with similar meanings, including automatic classification, numerical taxonomy, botryology (from Greek βότρυς "grape") and typological analysis. Definition[edit] According to Vladimir Estivill-Castro, the notion of a "cluster" cannot be precisely defined, which is one of the reasons why there are so many clustering algorithms.[4] There is a common denominator: a group of data objects.

Fuzzy clustering Fuzzy clustering is a class of algorithms for cluster analysis in which the allocation of data points to clusters is not "hard" (all-or-nothing) but "fuzzy" in the same sense as fuzzy logic. Explanation of clustering[edit] Data clustering is the process of dividing data elements into classes or clusters so that items in the same class are as similar as possible, and items in different classes are as dissimilar as possible. In hard clustering, data is divided into distinct clusters, where each data element belongs to exactly one cluster. One of the most widely used fuzzy clustering algorithms is the Fuzzy C-Means (FCM) Algorithm (Bezdek 1981). into a collection of c fuzzy clusters with respect to some given criterion. and a partition matrix , where each element wij tells the degree to which element xi belongs to cluster cj . which differs from the k-means objective function by the addition of the membership values uij and the fuzzifier m. Fuzzy c-means clustering[edit] See also[edit]

Expectation–maximization algorithm In statistics, an expectation–maximization (EM) algorithm is an iterative method for finding maximum likelihood or maximum a posteriori (MAP) estimates of parameters in statistical models, where the model depends on unobserved latent variables. The EM iteration alternates between performing an expectation (E) step, which creates a function for the expectation of the log-likelihood evaluated using the current estimate for the parameters, and a maximization (M) step, which computes parameters maximizing the expected log-likelihood found on the E step. These parameter-estimates are then used to determine the distribution of the latent variables in the next E step. EM clustering of Old Faithful eruption data. The random initial model (which due to the different scales of the axes appears to be two very flat and wide spheres) is fit to the observed data. History[edit] The convergence analysis of the Dempster-Laird-Rubin paper was flawed and a correct convergence analysis was published by C.

File:EM-Gaussian-data.svg From Wikimedia Commons, the free media repository Summary[edit] Licensing[edit] File history Click on a date/time to view the file as it appeared at that time. You cannot overwrite this file. File usage on other wikis The following other wikis use this file: Inside-outside algorithm In computer science, the inside–outside algorithm is a way of re-estimating production probabilities in a probabilistic context-free grammar. It was introduced James K. Baker in 1979 as a generalization of the forward–backward algorithm for parameter estimation on hidden Markov models to stochastic context-free grammars. It is used to compute expectations, for example as part of the expectation–maximization algorithm (an unsupervised learning algorithm). Inside and outside probabilities[edit] The inside probability is the total probability of generating words , given the root nonterminal and a grammar The outside probability is the total probability of beginning with the start symbol and generating the nonterminal and all the words outside , given a grammar Computing Inside probabilities[edit] Base Case: General Case: Suppose there is a rule in the grammar, then the probability of generating starting with a subtree rooted at is: is just the sum over all such possible rules: Here the start symbol is J.

Maximum Likelihood Maximum likelihood, also called the maximum likelihood method, is the procedure of finding the value of one or more parameters for a given statistic which makes the known likelihood distribution a maximum. The maximum likelihood estimate for a parameter is denoted For a Bernoulli distribution, so maximum likelihood occurs for . is not known ahead of time, the likelihood function is where or 1, and Rearranging gives so For a normal distribution, and giving Similarly, gives Note that in this case, the maximum likelihood standard deviation is the sample standard deviation, which is a biased estimator for the population standard deviation. For a weighted normal distribution, The variance of the mean is then But For a Poisson distribution, Memory strength and its components 1. S/R Model of memory 10 years ago we published a paper that delineated a distinction between the two components of long-term memory: stability and retrievability (Wozniak, Gorzelanczyk, Murakowski, 1995). 2. In the literature on memory and learning, we often encounter an ill-defined term: strength of memory (or strength of synaptic connections). memory retrievability determines how easy it is to retrieve a memory trace (i.e. recall it) memory stability determines how long a memory trace can last in memory (i.e. not be forgotten) 3. Both retrievability and stability of long-term memory can be correlated with a number of molecular or behavioral variables. Let us express retrievability R as the probability of retrieving a piece of information from memory. We express the changes in retrievability as: (3.1) R=e-d*t where: t - time R - probability of recall at time t (retrievability) d - decay constant dependent on the stability Now we can obtain the value of k. 4. For r=2 we have: 5.