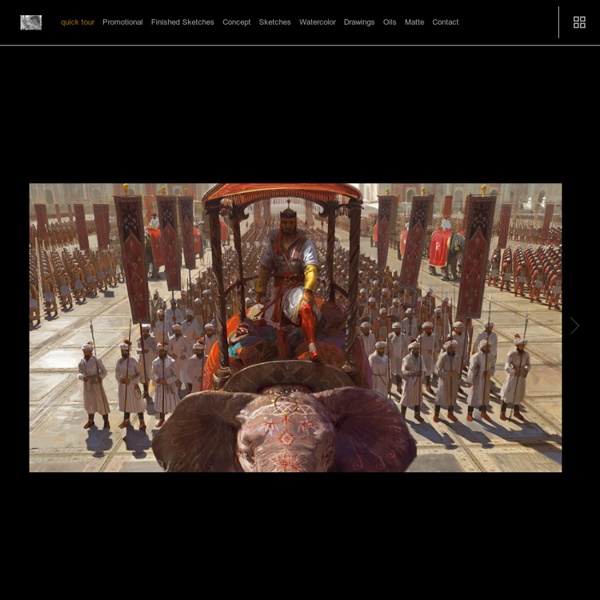 The Artwork of Peter Westermann - Peter Westermann Art Some of my artwork is available in limited edition prints. Head over to the Store to see what is available. Click the thumbnails below to view full image - Please contact me for inquiries on originals DYNAMO ✮ Le blog officiel de la Grenouille Noire Et hop, l’Invitation officielle au vernissage de mon exposition à Paris chez Arludik Galerie le 10 AVRIL! j’espère vous y voir À trés bientôt ————— Here’s the official invitation for the opening of my exhibition in Paris at Arludik the 10th of APRIL! Hope to see you there See you very soon Saizen Media The Slavers are coming! Saizen Media takes over the July issue of 3D World Magazine! Go behind the scenes with an extensive breakdown tutorial showing the step-by-step creative process. View Project

Greg Broadmore - Home Welcome to the website of artist, writer and friend to robots, Greg Broadmore. During the day he works as an illustrator, writer and conceptual designer for Weta Workshop and has designed for the motion pictures: District 9, King Kong, The Lion, the Witch and the Wardrobe, and Black Sheep amongst many, many others. Through Weta Workshop, he is the creator and designer of Dr. Grordbort's world of Rayguns and contraptions. Go and click the link and check it out, it's really good and I'm not just saying that! The Art of Moebius Jean Giraud was a French artist, cartoonist and writer who worked in the Franco-Belgian bandes dessinées tradition. Giraud garnered worldwide acclaim predominantly under the pseudonym Moebius and to a lesser extent Gir, which he used for the Blueberry series and his paintings. Moebius also contributed storyboards and concept designs to numerous science fiction and fantasy films, such as Alien, Tron, The Fifth Element and The Abyss. The Art of Moebius

Gallery « Tom Parker Tom Parker Character artist Gallery Older work 2D Artwork (really old) Like this: Martin Wittig Well, I am finally back from my Greece/ Russia trip. I had an AWESOME time!!! Greece was just plain beautiful, and Russia was exciting as well. I did a lot of sketching as you can imagine, but I also took plenty of time to just relax. This is going to be a really crazy month for me, so I am glad to feel rested and ready to tackle the work ahead.