Studio Interview with Jonesy, the environmental artist who places bronze sculptures around the City. One of the most varied artists on the East London street art scene is Jonesy, a man equally at home casting bronze or producing paste ups. 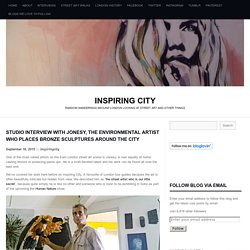 He is a multi-faceted talent and his work can be found all over the east end. We’ve covered his work here before on Inspiring City. A favourite of London tour guides because the art is often beautifully intricate but hidden from view. Bambi: graffiti artist on why she's more than just a 'female Banksy’ Her work decorates the streets and underpasses of north London, as well as the homes of everyone from Kanye West and Rihanna to Robbie Williams and Adele, but – like her male counterpart Banksy – Britain’s best-known female street artist has gone to great lengths to preserve her anonymity. 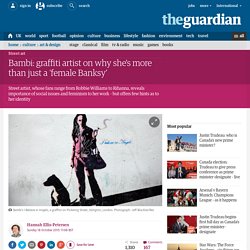 The identity of Bambi has remained a mystery since her pink tag appeared in 2010, first beneath include a stencil portrait of Amy Winehouse in a Camden doorway and since then in graffiti depicting everyone from Kim Kardashian to Boris Johnson portrayed as Winston Churchill. But in a rare and exclusive interview with the Guardian, the graffiti artist, who grew up in London – home to all her street art – revealed herself as an ardent feminist who she got a taste for graffiti at a very young age and who sees her artwork as a social crusade.

Recalling in vivid detail the first time she picked up a spray can, Bambi said: “I suppose I started my artistic career as a childhood vandal,” she said. Studio Interview with Jonesy, the environmental artist who places bronze sculptures around the City. One of the most varied artists on the East London street art scene is Jonesy, a man equally at home casting bronze or producing paste ups. 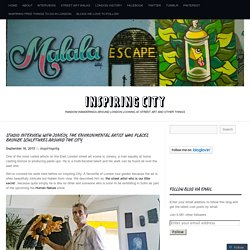 He is a multi-faceted talent and his work can be found all over the east end. We’ve covered his work here before on Inspiring City. A favourite of London tour guides because the art is often beautifully intricate but hidden from view. We described him as ‘the street artist who is our little secret‘, because quite simply he is like no other and someone who is soon to be exhibiting in Soho as part of the upcoming the Human Nature show. Graffoto Blog: Dan Witz - Empty The Cages. Photos: NoLionsinEngland except where stated There are few joys greater than the unexpected discovery of a stunning piece of street art. 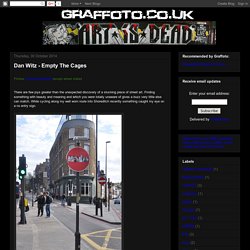 Finding something with beauty and meaning and which you were totally unaware of gives a buzz very little else can match. While cycling along my well worn route into Shoreditch recently something caught my eye on a no entry sign. I pulled over, I photographed it, I puzzled over it. My instant assessment was – it’s on a traffic sign; it’s well made; it’s perfectly placed; it must be something new by Clet Abraham. This one had clear provenance, something trapped behind a grating in a wall clawing to escape is classic Dan Witz from NY.

Courtesy Emptythecages.org Empty The Cages is a new PETA (People For The Ethical Treatment Of Animals) campaign for which vegan Dan Witz aims to raise awareness of the cruelty inflicted on animals in the quest for more efficient and cheaper meat production to feed the worst parasite this planet has ever witnessed - mankind. Street artist captures UK wildlife in murals around London – in pictures. Meet the guy who paints GIFs on London’s walls. You might want to take a closer look at some of the graffiti on London’s walls. 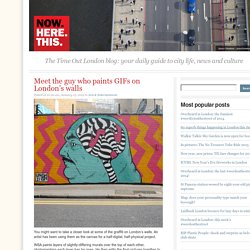 An artist has been using them as the canvas for a half-digital, half-physical project. INSA paints layers of slightly-differing murals over the top of each other, photographing each layer has he goes. He then edits the final pictures together to create snazzy GIFs. We chatted to him about how why he decided to merge the internet with the real world. What was the first GIF you painted? This was one of the first GIF pieces I painted. How did you come up with the idea? ‘I’d been thinking a lot about how people were actually seeing my work. How many layers of paint do you need to get a perfect smooth GIF? ‘Four is pretty much the minimum numbers of frames to make a basic stripe move smoothly, but then I’ve painted many frames before.

Redchurch Street How do people react to the GIF-ITI? ‘I get the impression people love it. Welcome to Saki & Zabou's diner. May24 I met Saki And Bitches a few month ago at the Femme Fierce event in Leake Street. 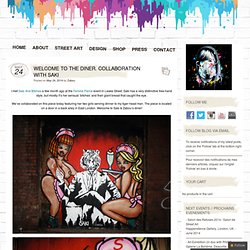 Saki has a very distinctive free-hand style, but mostly it’s her sensual ‘bitches’ and their giant breast that caught the eye. We’ve collaborated on this piece today featuring her two girls serving dinner to my tiger-head man. The piece is located on a door in a back alley in East London. Welcome to Saki & Zabou’s diner! Title: ‘Welcome to the Diner’ – Made with: Stencil, Spray paint // East London – 2014. Mural Painting. Nathan Evans Illustration e: info@n-evans.com. 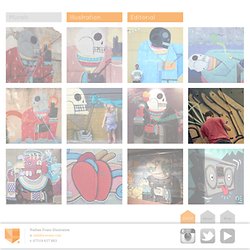