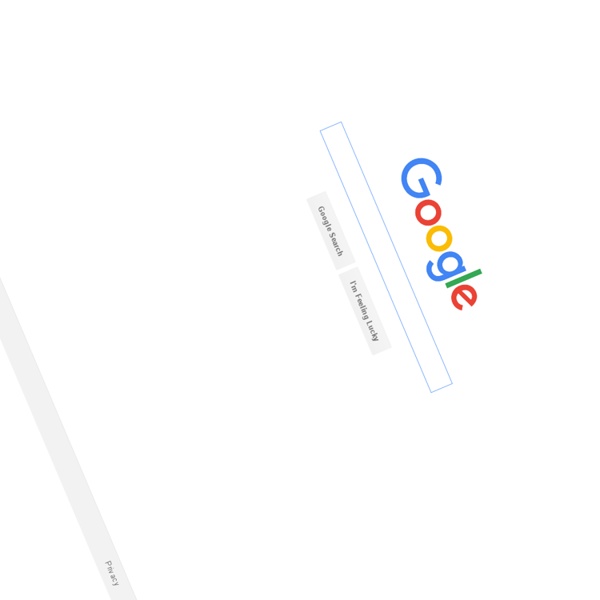 Googler Turns Censored Images Into Meta Art Google's Street View-style cameras are giving Googlers one more thing to ogle at. That's right, not just the great outdoors — now you can scope out museums, too. With the Google Art Project, you can take a gallery or collection tour and peruse through more than 45,000 pieces of art by approximately 10,000 artists. Google's 15-lens camera contraptions — the ones used for Street View — are again to thank; however, because of certain copyright restrictions, some paintings are blurred. One artist, Phil Thompson of the UK, has decided to flip the censorship on its head and create meta art out of the blurred boxes. How to Find Anything Online: Become an Internet Research Expert Einstein once said, “The secret to creativity is knowing how to hide your sources.” The same could be said of intelligence. What they don’t tell you is that the “smart” people of the world are, in most cases, just better at researching and learning things than everyone else. But researching is a learned skill, not something you’re born with.

'I read it to Diana's coffin and heard a whisper' August 31 1997 started for me long before dawn. News of Diana's crash was followed by mounting concern, and then confirmation that reports of a broken leg and mild head wounds had been wildly optimistic: the girl I had grown up with, and known for all of my life, had been pursued into a tunnel in Paris, and had been killed. That day of family devastation and worldwide shock ended for me with a flight from Cape Town to London, an overnight journey spent with a box of tissues in one hand, and my address book in the other: if grief was to deprive me of sleep, then I was determined to befuddle the pain by tackling distracting practicalities. One of the questions I set myself was: who should give Diana's eulogy? I went slowly from A to Z, but drew a blank. Arriving in England, I called my mother: "It's got to be me, hasn't it?"

Your Age on Other Worlds Want to melt those years away? Travel to an outer planet! <div class="js-required"><hr> This Page requires a Javascript capable browser <hr></div> Fill in your birthdate below in the space indicated. Artist Turns the Google Art Project’s Blurry Canvases Into Hazy Abstract Paintings “The internet provides a huge amount of material which otherwise would be unattainable to most people,” the artist told Wired. “It has led to a lot of creativity — whether it is with memes or highly skilled photoshop jobs — everyone is now able to create and edit images.” Thompson has also dealt with copyright law in other projects dealing, like the “Getty Oil Paintings” project, from last year, in which he appropriated and republished images of paintings like Matisse‘s “The Dance,” from the Getty Images photo bank that have the “Getty Images” logo superimposed over them as a watermark to ward off unwanted usage. Thompson’s work consistently deals with the ways in which classic art forms can be reproduced, recycled, and distorted by technology, in manner that harkens back to the “Pictures” work for a New Aesthetic generation. In another project, Thompson deconstructs Michelangelo’s “David” in an awesome, glitchy video titled “Dimensionist Sculpture” (embedded below). — Ashton Cooper

16 things I know are true but haven’t quite learned yet There’s a difference between knowing something and living as if it were true. At the end of 2013, these truths are all lingering on that awkward threshold, for me anyway. 1) The sooner you do something, the more of your life you get to spend with that thing done — even though it takes less effort (or at least no more) than it will later. It’s the ultimate sure-thing investment and I pass it up all the time. 2) I never regret working out. I can’t count the number of times I’ve negotiated with myself to work out the next day instead of today because I’m worried it will be a “bad workout.”

A Rainbow Is A Song: The Wild, Curious & Wonderful World of Synesthesia What's the Big Idea? On a late winter day in 1922, the sound of a gun shot resounded with a loud boom in the hills surrounding the house of three-year-old Edgar Curtis. The sound itself wasn't out of the ordinary, since the Curtises lived near a firing range. What was extraordinary was the question the boy turned to ask his mother: "What is that big, black noise?" A few days later, when his mother was putting him to bed, Edgar heard the chirping of a shrill cricket and demanded, "What is that little white noise?" For Edgar, low, rhythmic notes were dark in color. 11 cheap gifts guaranteed to impress science geeks - Crazy as a Bag of Hammers - #Humor, #Jokes and #fun stuff. - Buy Click, Crazy, fun, Giant Plush Microbes, gifts, Klein Bottle, Miracle Berries, world Science comes up with a lot of awesome stuff, and you don’t need a Ph.D, a secret lab, or government funding to get your hands on some of the coolest discoveries. We’ve got a list of 11 mostly affordable gifts that are guaranteed to blow your mind, whether or not you’re a science geek. Also known as frozen smoke, Aerogel is the world’s lowest density solid, clocking in at 96% air.

Google's Copyright Policy Spawns Mega-Meta Art From China The Google Art Project allows art enthusiasts to visit distant museums online by scanning them with the same 15-lens camera rigs used by Google Street View. Due to copyright restrictions, however, certain paintings needed to be blurred, just like faces are in GSV. British artist Phil Thompson was intrigued by the foggy interruptions. His project Copyrights is his exploration of Google’s grand, utopian exercise in bringing culture to the masses. Molly Dilworth - projects August 2010, Google Earth view of 16 Manhattan Avenue, Brooklyn NY Paintings for Satellites I have an inclination to work with materials that have had an obvious life before I use them; it's a challenge and a pleasure to make something from nothing. In the last year my practice has grown out of the studio in the form of large-scale rooftop paintings for Google Earth. This project uses materials from the waste stream (discarded house paint) to mark a physical presence in digital space. My work is generally concerned with human perception of current conditions; the Paintings for Satellites are specifically concerned with the effects of the digital on our physical bodies.

5 Best Things to Say in an Interview By Catherine ConlanMonster Contributing Writer The best things you can say in an interview won’t necessarily get you the job on their own, but they can certainly pave the way. Keep these five things in mind as you go through the interviewing process to give yourself the best chance at landing the job. Ask Good Questions According to Howard Pines, founder and CEO of BeamPines, “the best thing a candidate can do at an interview is ask good questions.” Gabo’s Wild Ride: The Incredible Adventures of Gabriel García Márquez Nobel prize-winning author Gabriel García Márquez blurs the lines between fantasy and reality. His grandmother was a secret witch doctor who often predicted the arrival of guests. His grandfather was a respected war veteran who once killed a man in a duel. And then there's the loose bull that plowed into his family's kitchen, an incident foretold by an elderly talking parrot.

The 6 Creepiest Places on Earth It doesn't matter whether or not you believe in ghosts, there are some places in which none of us would want to spend a night. These places have well earned their reputations as being so creepy, tragic or mysterious (or all three) that they definitely qualify as "haunted." Places like... Aokigahara is a woodland at the base of Mount Fuji in Japan that makes The Blair Witch Project forest look like Winnie the Pooh's Hundred Acre Wood. It probably has something to do with all the dead bodies scattered around. GoogleFaces Google Facessearching for faces on Google Maps Collaboration with: Christian Loclair idea