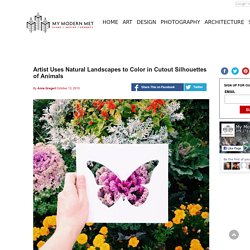 Using paper as his medium of choice, the artist carves out a sleek animal silhouette on each sheet and proceeds to photograph the said cutout, superimposed on the world around him. Tolsty brings his elegant outlines into the natural world, where he searches for an authentic and visually engaging background. Between dewdrop-covered grass, tree trunks worn with rustic lines, colorfully bold flower petals, and freshly fallen autumn leaves, the artist has plenty of options to choose from. Each image in this ongoing photo project settles on a section of scenery that compliments his latest paper creature. Wire Animal Sculptures Look Like Life-Size Scribbled Drawings Suspended in Mid-Air.

Artist David Oliveira has an insightful understanding of both the two-dimensional and three-dimensional worlds. 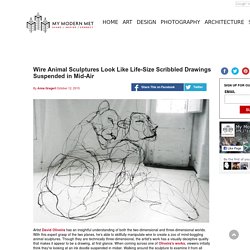 With this expert grasp of the two planes, he's able to skillfully manipulate wire to create a zoo of mind-boggling animal sculptures. Though they are technically three-dimensional, the artist's work has a visually deceptive quality that makes it appear to be a drawing, at first glance. When coming across one of Oliveira's works, viewers initially think they're looking at an ink doodle suspended in midair. Walking around the sculpture to examine it from all angles allows one to then realize that it isn't a flat, two-dimensional image. In fact, it's an optical illusion that begs for the attention of willing art enthusiasts. Bright and beautiful illustration from the highly sought-after JooHee Yoon.

Editorial illustration comes in all shapes and sizes and JooHee Yoon’s work is definitely on the stranger end of the spectrum. 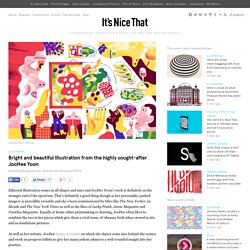 That’s definitely a good thing though as her personality-packed imagery is incredibly versatile and she’s been commissioned by titles like The New Yorker, Le Monde and The New York Times as well as the likes of Lucky Peach, Jamie Magazine and Nautilus Magazine. Equally at home either printmaking or drawing, JooHee often likes to combine the two in her pieces which give them a vivid sense of vibrancy both when viewed in situ and as standalone pictures. As well as her website, JooHee keeps a Tumblr on which she shares some nice behind-the-scenes and work-in-progress tidbits to give her many ardent admirers a well-rounded insight into her practice. JoHee Yoon: Bears for Willamette Week JooHee Yoon:New York Times article arguing women are better decision makers than men. Smashing prints from French surrealist Baptiste Virot. Baptiste Virot: A Burger Splash (detail) French illustrator Baptiste Virot is a seriously exciting new talent in the comics world. 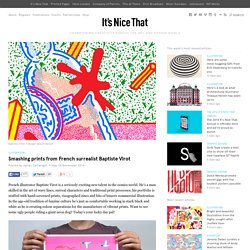 Only Nails, Always Different: Artist John Bisbee’s Life of Sculpting with Nails. While in college, artist John Bisbee was scavaging in an abandoned house looking for items to incorporate into a series of found-object sculptures when he kicked over a bucket of old rusty nails. 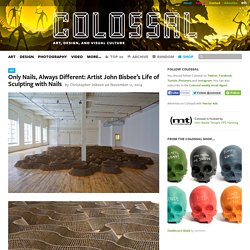 To his astonishment, the nails had fused together into a bucket-shaped hunk of metal. He had an epiphany. Bisbee has since spent nearly 30 years using nails as his sole medium to create geometric sculptures, organic installations, and unwieldy objects from thousands of nails that are hammered, bent, welded, or fastened together in a seemingly limitless procession of forms. Drew Tyndell’s Fantastic Looping Illustrations. There are two clear front runners for most important visual storytelling method: the emoji and the GIF. 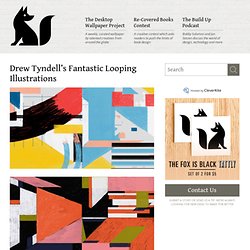 In the case of the latter it’s becomes increasingly interesting to see how people are experimenting with the media of short, looping animations. Tellas brings abstract, nature inspired art to city streets. Digging through Flickr the other day I came across the art of Tellas, a street artist from Italy. 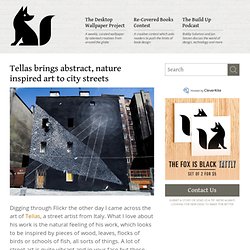 Vibrantly colorfuled, geometric graffiti pieces by Nelio. I spent a bunch of time falling down the rabbit hole that is Flickr last night, finding a bunch of great artists to write about. 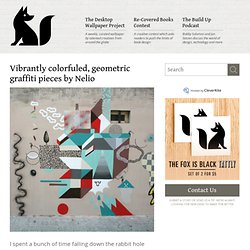 One of my favorites was Nelio, a French graffiti artist who’s work uses tons of bright colors all laid out int he most interesting, geometric ways. When I see work like Nelio’s it truly solidifies the idea that graffiti can be art. I would love to see his pieces around Los Angeles, I think they would liven up the neighborhoods. Digital Artist Giuseppe Randazzo Creates Elaborate Arrays of 3D-Printed Stones. Stone Field 00 / exp00 – simple attractor exponential field. 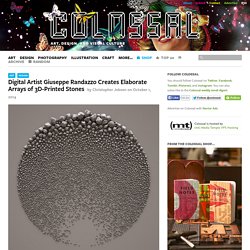 Digital rendering. Stone Field 05 / three attractors field. Fantastic new solo work from Diogo Potes of Alva Alva Studio. Not much makes us as happy as a brilliant studio churning out spectacular work, but to find out each member is a fantastic designer in their own right is even better. 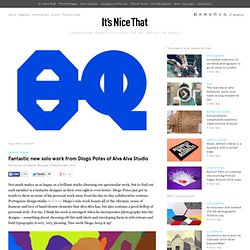 New Cut Paper Sculptures and Illustrations by Elsa Mora. Artist Elsa Mora recently updated her portfolio with a number of beautiful paper sculptures created for both private clients and exhibition. All of Mora’s pieces are created with little more than acid-free paper and glue which is carefully cut, layered, and assembled to create 2D and 3D images. Several of the pieces are currently at the Racine Art Museum in Wisconsin for a show titled Once Upon A Time: Fairy Tales, Fantasy, and Contemporary Art that runs through August 31. Explore Psychedelic 3D Chambers Inspired By Video Games Like 'Diablo'

Halls of Viscera Alex McLeod is a Canadian artist whose digitally rendered images reference the fantastical backdrops of video games like Diablo and Lighthouse, along with the classic PC adventure games released by Sierra Entertainment. His work focuses on imagined landscapes that have a sci-fi aesthetic—rich in abstractions, textures, and dripping with psychedelia. McLeod creates his artwork using software like Cinema 4D, Photoshop, AfterEffects and UDK to concoct a range of forms and consistencies that look like anything from glass to metal, wood or plastic. The level of detail and the image's surreal lighting might look meticulously planned, but McLeod relies much more on instinct.

"I don't start with a preconceived idea, the work just evolves by modifying textures, scale, and placement of the objects," he explains. Surreal Worlds Digitally Painted by Gediminas Pranckevicius. Conceptual artist and illustrator Gediminas Pranckevicius posesses an imagination to covet. While most of his digital painting is centered around character design, his larger landscapes seen here are rich in detail, creating impossible but ingenious juxtapositions of water, land, and haphazard architecture. Colorful 3D Paper Designs Beautifully Showcase Emotion - My Modern Met. In 2006, then-graphic designer Yulia Brodskaya abandoned the computer in favor of paper art. It always held a special fascination for her, and she now draws with paper instead of on it.

Fashion sales, privates sales at BrandAlley. Designer Clothes. Photography: Surprise! Nick Knight's Instagram feed is better than yours. Nick Knight: Instagram Feed I think it’s really cool when great photographers have really fantastic Instagram feeds. I mean, if you were a DJ you wouldn’t publish your shit mix tapes would you? When photography big dog Nick Knight’s not switching on the wind machine and putting another shirt on Kanye West, he devotes his time to building up a seriously impressive Instagram feed. Publication: London's architecture according to astonishingly talented illustrator Thibaud Herem. Christmas came early yesterday afternoon when the lovely Thibaud Herem came to visit us bearing his beautiful new publication and a whole load of original drawings for us to gawp at.

To many people, Thibaud is ‘the guy who draws those amazingly detailed buildings’ and that’s fine, because that’s what he is. What I mean by this is that nobody else in the entire illustration world, nay world, creates anything like Thibaud. New Cut and Contoured Map Portrait by Ed Fairburn. Artist Ed Fairburn continues to push his creative limits with these new map portraits. In the piece shown above, a Bristol street map has been carefully cut and drawn on, revealing the side of a woman's face. Doug & Mike Starn: The No Mind Not Thinks No Things, London. Personal Work - Maike Plenzke Illustration. School Gym Transformed Into Island with Permanent Marker. The amazing things that artists can do with a simple pen or pencil are limitless.

So it's not surprising, although it is especially impressive, to see this detailed island landscape created completely with a black permanent marker. Entitled Oiwa Island 2, the public art installation was drawn by Brazilian artist Oscar Oiwa on plastic sheets that covered the walls and floors of an abandoned school gym on Ibuki Island. Using only black and white, Oiwa covered the space with intricate, repetitive patterns, scenes of nature, and amazing details that viewers were invited to walk across and inspect from different points of view.