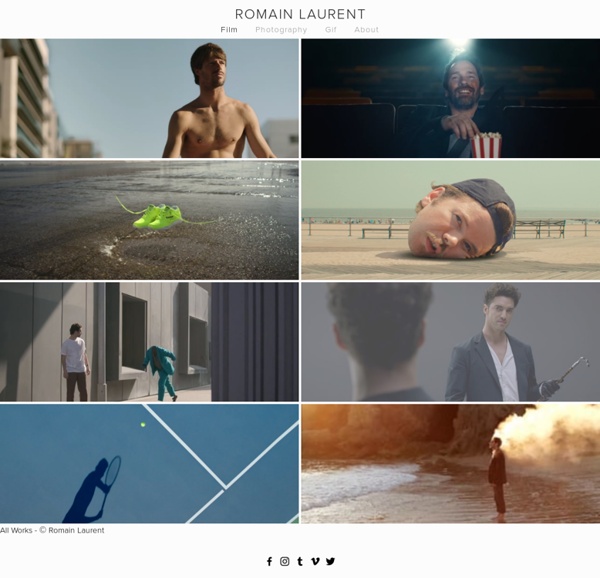 Van Turned Into Giant Wet Plate Camera ~ by Photographer Ian Ruhter Los Angeles-based photographer Ian Ruhter creates amazing photographs using a van that he turned into a gigantic camera. Converting the Van into a massive camera was a two year labour of love. Ian uses the collodion wet plate process, first introduced in the 1850s, to produce the 36x24 inch images. Each image is one of a kind and costs $500 to produce, Michael Tittel: Behavior This week we are sharing work submitted to Lenscratch… It does not happen often, but every now and then I will catch someone sneaking a candid of me in public. It is the photographer in me that relates to the strides taken for the perfect image, and because of this I always pretend I cannot see them.

Photography These lovely, ethereal photos of mist-filled forests were captured by brothers Andrei and Sergiu Cosma of PhotoCosma who live and work in Romania. They plan trips together, light, shoot and process each image as a team, resulting in some truly remarkable perspectives. You can see much more of their work on 1x.com and in their very extensive gallery featuring a wide range of natural wonders. (via reddit) I first discovered the gripping portraiture of accountant turned self-taught photographer Lee Jeffries back in December and have been following his journey ever since. Silent_world "Silent World" was awarded by the Marcel Bleustein-Blanchet Foundation prize, and received a Grant from the CICRP center Marseille, European Year of Culture 2013. The silence of the world, like a quotation, is suddenly endowed with an oppressive eloquence. Small intrusions are the true sparks here, because their disconcerting presence disrupts the majestic calm of the streets and squares. Are the latter guilty or victims? The fate that governs these shots in a tangible way is not the result of decisions taken by metaphysical powers, but stems uniquely from the imagination of the two creators of these photos, Lucie & Simon.

Artist's Physical Gestures Produce Beautiful Charcoal Drawings Using just her body and a piece of charcoal, New Orleans-based performance artist Heather Hansen bends and twists in fluid motions across the surface of paper to create beautifully rough symmetrical shapes and patterns. Her captivating performances involve dance-like movements that are just as much the main focus as the final, large-scale drawings. Watching her process is a mesmerizing experience where lines emerge from her many natural, physical gestures. Without hesitation, she repeats her movements and smears the lines together into the final, unpredictable works. She then lifts her body off of the page to reveal the one-of-a-kind pieces. Hansen quotes Joseph Campbell as part of her inspiration behind her work: "The goal of life is to make your heartbeat match the beat of the universe.