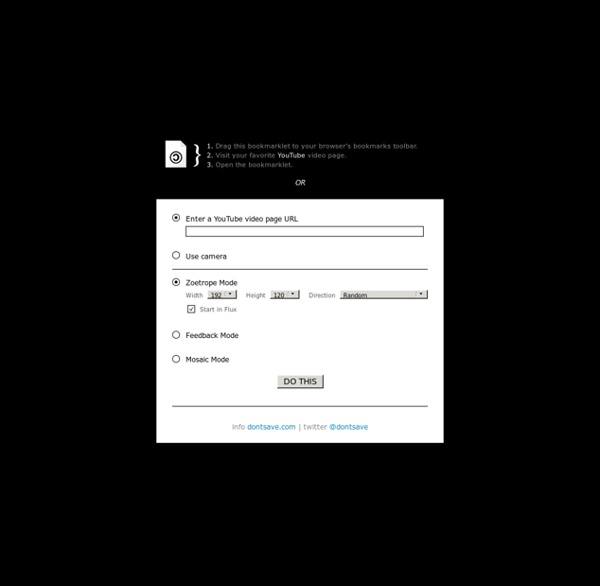 Molly Dilworth - projects August 2010, Google Earth view of 16 Manhattan Avenue, Brooklyn NY Paintings for Satellites I have an inclination to work with materials that have had an obvious life before I use them; it's a challenge and a pleasure to make something from nothing. In the last year my practice has grown out of the studio in the form of large-scale rooftop paintings for Google Earth. My work is generally concerned with human perception of current conditions; the Paintings for Satellites are specifically concerned with the effects of the digital on our physical bodies. All my work begins a series of rules derived from existing conditions. As this project proliferates, it will take two forms - a community model, using local volunteers and paint from the waste stream and a design/build model, using solar-reflective paint, solar panels and green roofing contractors.

CineSkates Camera Sliders by Justin Jensen Update 3: The CineSkates Kickstarter project has come to a close, and the support from our backers has been amazing. We are working to get all the CineSkates sent out quickly, and we are now taking pre-orders on the Cinetics web site: store.cinetics.com Update 2: By popular demand, we added a new reward level for a ready-to-go CineSkates System for iPhone 4 and iPhone 4S! This reward includes CineSkates, the GorillaPod Focus tripod, the GorillaPod BH1 Ballhead, and The Glif iPhone mount... one of our favorite Kickstarter projects! Update 1: Wow! Thanks for checking out my Kickstarter project! What are CineSkates? CineSkates work specifically with the GorillaPod Focus tripod. What rewards are available? What's the money for? When will rewards ship? What makes CineSkates so cool? Filmmakers will find CineSkates perfect for weddings, music videos, product demos, real estate ads, web videos, corporate films, and even for narrative and documentary films. How do you use them? What is Cinetics?

How to write a good short film script - Bulletfilm Blogs "By luck, I stumbled upon your site, and of course I wanted to try it out. I went on to deposit $500 on OneTwoTrade, then opened 5 positions and won 4. Took out the $500 and still have the profit of $288 to trade with. This is a great system you got there Sir, I definitely owe you one." Shelly Green - New York "I began with $200 on OneTwoTrade and I went down to $100 the first day. John Bates - Los Angeles "I didn't know what to think about this system at first, as I have always looked at trading as too complicated and only for professionals... obviously I was wrong. Julia Moore - Chicago "Just started trading binary options a month ago. Scott Parker - Miami

Dine Out Non-GMO If you have a favorite restaurant, and you eat there often, you should only need to ask these questions once. It's helpful to have a knowledgeable server or chef guide you through the menu to help you avoid GM foods. It’s not too hard to identify the non-GMO options. A good first question is, "What oil do you cook with?" If they use soy, cottonseed, canola, or corn oils they are likely GM if they are not organic. Since most processed foods contain GM derivatives (corn and soy, for example), ask what foods the chef prepares fresh, and choose those items. Try to avoid processed foods with the oils mentioned above, or with soy and corn derivatives, including: soy flour, soy protein, soy lecithin, textured vegetable protein, corn meal, corn syrup, dextrose, maltodextrin, fructose, citric acid, and lactic acid. Other potential sources of GM foods at restaurants include salad dressings, bread, and mayonnaise, and sugar from GM sugar beets. Other Sources of GMOs

Eva and Franco Mattes, Life Sharing (2000) Life Sharing (2000-2003) «Life Sharing is abstract pornography» Hito Steyerl In January 2001 we started sharing our personal computer through our website. Everything was visible: texts, photos, music, videos, software, operating system, bank statements and even our private email. People could take anything they wanted, including the system itself, since we were using only free software. Previously we were re-using and mixing other people’s work, while now we were sharing everything with everybody. Working with a computer on a daily basis, over the years you will share most of your time, your culture, your relationships, your memories, ideas and future projects. No social network existed at the time, and Life Sharing felt rather absurd, if not plain wrong. You could read all our emails. Some Life Sharing screenshots and software experiments: To extend the idea of exposing ourselves we started wearing a GPS transmitter that was sending our coordinates to the website.

A Teenager’s Plea: Don’t Suck There are some things that just get to me. When I leave the Taco Bell drive through knowing, without even looking into the bag, that they have messed up my order.I certainly don’t like it when I end up shaking hands and it was supposed to be a fist bump. That’s just awkward. Those are little. What seriously gets to me is when there is a lack in how the church talks to us. I would walk into a service, and I would feel like I didn’t belong. We (teens) are a group who want to belong. Targeted It’s one thing to tell us we’re important, it’s another thing to show us. Side note: Everything matters: the colors you use, the layers you put on each other, the graphics you use or don’t use, and the way you give it to us. If we don’t feel targeted, you lose us. Experienced I want to be able to go into a church and have a serious experience with God. Everyone has an experience, it’s the churches’ goal to see that experience is a great one. There have been some things that work: “Go after them.

art website sales contract .com by rafaël rozendaal, 2011 Victoria's Secret model Kylie Bisutti quits over religious beliefs Model Kylie Bisutti said wearing lingerie down the catwalk clashed with her Christian beliefs. Picture: Frazer Harrison Source: Getty Images Kylie Bisutti says her body is for her husband's eyes only. YOUNG beauty Kylie Bisutti is quitting Victoria's Secret at just 21 because modelling lingerie does not conform with her Christian beliefs. Bisutti won Victoria's Secret Model Search in 2009 when she was 19, beating 10,000 other hopefuls. "Victoria’s Secret was my absolutely biggest goal in life, and it was all I ever wanted career-wise," she told FOX411. "I actually loved it while I was there, it was so much fun and I had a blast. Bisutti, from Simi Valley, California, was married shortly before getting her wings, and she said that was also a factor in her decision. "My body should only be for my husband and it’s just a sacred thing," Bisutti continued. Bisutti, however, is not giving up the catwalk just yet.