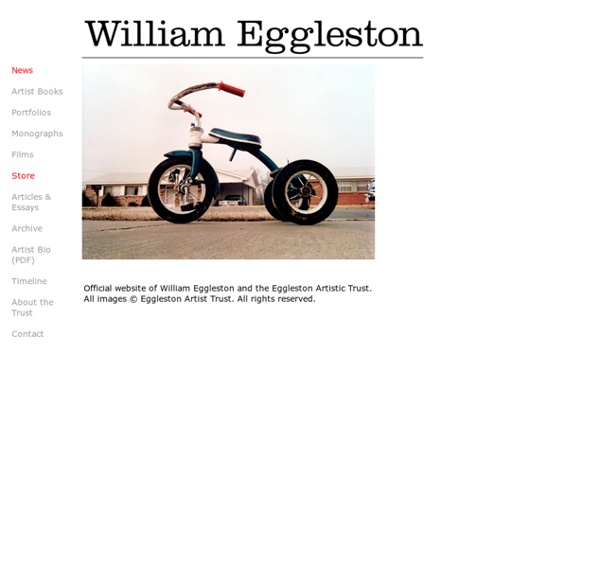 Amazing 19th Century Photographs of the American West by Timothy O'Sullivan Photographer Timothy H. O’Sullivan is perhaps best known for his photos of the Civil War, which include his famous “Harvest of Death” photo. But after covering the war, O’Sullivan decided to strike out West, and when he came back, he brought with him some of the earliest photos of the (quite literally) “wild” American West.

The Top 100 Artists on ARTISTdirect - Pop, Rock & Hip Hop Music Styles - Free Music Download, Music Video, MP3 music and Music CD ARTISTdirect April 10, 2014 : Help Cart > Home> Artists Artists Shockingly Surreal Self-Portraits (10 photos) Born in Madrid, Spain, Manu Pombrol is a 35-year-old artist and photographer whose self-portraits are nothing short of extraordinary. Pombrol first started down a creative path when, at a very young age, he painted pictures or portraits in pastels. Then, as computers started making their way into the mainstream, he worked in graphic design. He bought his first camera only about three years ago and that's when everything changed. In his words, "Everything started to make sense. I found out (a little bit late) that photography was the perfect tool to show what was in my mind.

Cashback (film) Cashback is a film directed by Sean Ellis. Originally exhibited as a short in 2004, it was expanded to feature length in 2006. Both versions were produced by Lene Bausager, starring Sean Biggerstaff and Emilia Fox. The feature was released by Magnolia Pictures in late 2006 and also starred Michelle Ryan.[1] Cashback was produced by Gaumont and Left Turn Films. Ben, an aspiring artist, develops insomnia after a painful breakup with his girlfriend, Suzy. To take his mind off of Suzy and to occupy the extra waking hours he has recently gained, Ben begins working at a local Sainsbury's supermarket, where he meets colourful co-workers.

Trey Ratcliff - Google+ - Why I Don't Use Watermarks I get this question a lot, and… Ken Rathke – Trey and Thomas Hawk have many things in common - each has over 300,000 followers on Google Plus. Whether their profile or views in this conversation makes them your hero or leader is 100% your call. Both Rush Limbaugh and The Jersey Shore have large audiences, and popularity is not always the only indicator. What are rather humorous are the inconsistencies between Ratcliff and Hawk that neither really seems to fully resolve.

International Center of Photography - School The School at ICP offers more than 400 courses that range from traditional film and darkroom practice to digital media. The state-of-the-art facility features black-and-white and color labs; digital labs, including resources for multimedia and digital video; and a professional shooting studio. The faculty of ICP is dedicated to nurturing new talent and represents some of the world's most accomplished and innovative practitioners, offering expert guidance and inside perspectives into the field. Students come from around the world, representing virtually every country and all ages and backgrounds, making the discussions at ICP rich and provocative. The ICP staff welcomes you and is always available for consultation to review your work.

Top 50 Photos Taken at The Perfect Time To make a perfect photograph you need a good camera, steady arm, a lot of luck and a perfect moment. A perfect moment is an extraordinary point in time when something happens that is worth capturing and making immortal for the benefit of whole human kind. Check out the coolest photo gallery we have compiled for you; these are top 50 photos taken at the perfect time.