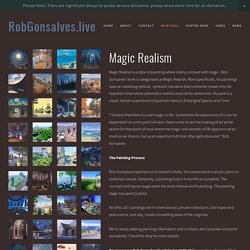 Rob Gonsalves’ work is categorized as Magic Realism. More specifically, his paintings have an autobiographical, symbolic narrative that invites the viewer into his beautiful mind where alternative realities exist at the same time. His work is a visual, human experience of quantum theory’s Entangled Spaces and Time. “I believe that there is a real magic in life. Sometimes the experience of it can be dependent on one’s point of view. The Painting Process Rob Gonsalves explored oil on board initially. (29) Pinterest. The Art of Tianhua Xu. Alexander Averin, 1952. Russian painter🎨 Alexander Averin / Александр Аверин was born in Noginsk, near Moscow. 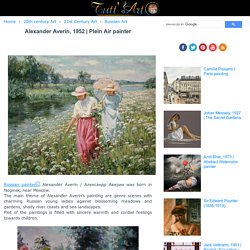 The main theme of Alexander Averin’s painting are genre scenes with charming Russian young ladies against blossoming meadows and gardens, shady river coasts and sea landscapes. Plot of the paintings is filled with sincere warmth and cordial feelings towards children. Averin learned his technique from the painter Dmitri Yorontnov at the School of Fine Arts "Souvenir de I'An 1905" in Moscow. He is a member of the Moscow Painters Association, with whom he has exhibited on many occasions. For many years he specialized in portraits.

His style is purely realistic, with a strong influence of the late 19th Century Russian painters, usually depicting domestic scenes in a soft twilight. Like Pavel Fedotov, Averin's favourite painter, he works outside in the air, using surroundings to inspire the brush and compliment the work. Il pittore Russo🎨 Alexander Averin è nato nel 1952 a Noginsk, vicino Mosca. Ivan Khotenov. The Art of Michael Kutsche. Rob Wildenburg. The Artwork of Peter Westermann - Peter Westermann Art. Some of my artwork is available in limited edition prints. 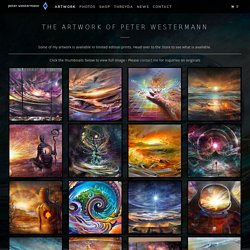 Head over to the Store to see what is available. Click the thumbnails below to view full image - Please contact me for inquiries on originals. Goodbrush. Christoph Schindelar. The Art of Quentin Mabille. The Art of Moebius. Jean Giraud was a French artist, cartoonist and writer who worked in the Franco-Belgian bandes dessinées tradition. 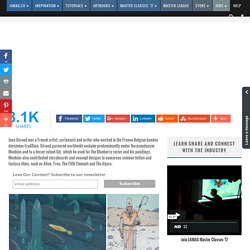 Giraud garnered worldwide acclaim predominantly under the pseudonym Moebius and to a lesser extent Gir, which he used for the Blueberry series and his paintings. Moebius also contributed storyboards and concept designs to numerous science fiction and fantasy films, such as Alien, Tron, The Fifth Element and The Abyss. The Art of Moebius. *** - art. Anna Dittmann · Illustration. Mélanie Delon - Illustrator. Fine Art and You: Acrylic Paintings By French Visual Artist Patrice Murciano. Patrice Murciano was born in Belfort on May 27, 1969, he grew up in South of France. 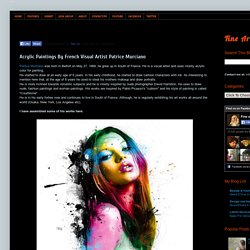 He is a visual artist and uses mostly acrylic color for painting. He started to draw at an early age of 6 years. In his early childhood, he started to draw cartoon characters with ink. Its interesting to mention here that, at the age of 8 years he used to steal his mothers makeup and draw portraits. Reevolver. Fine Art and You: American illustrator. William Loomis was born in Syracuse, New York, and grew up in Zanesville, Ohio and spent much of his working life in Chicago, Illinois. 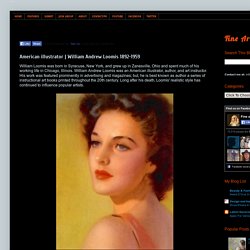 William Andrew Loomis was an American illustrator, author, and art instructor. His work was featured prominently in advertising and magazines; but, he is best known as author a series of instructional art books printed throughout the 20th century. Long after his death, Loomis' realistic style has continued to influence popular artists. Click below to see paintings slideshow by William Andrew Loomis: Fine Art and You: Beautiful Illustrations by Sarah Bochaton. Hey all! 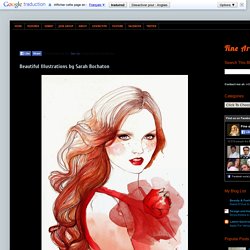 How are you doing? Art Era Timelines. These pages are free! 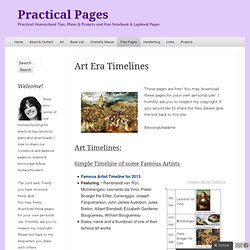 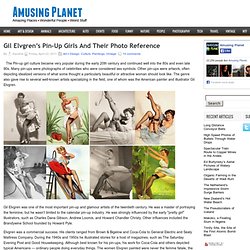 Many pin-ups were photographs of celebrities who were considered sex symbols. Other pin-ups were artwork, often depicting idealized versions of what some thought a particularly beautiful or attractive woman should look like. The genre also gave rise to several well-known artists specializing in the field, one of whom was the American painter and illustrator Gil Elvgren. Artpad.org - Home. Stephanie Valentin. Tweet To download my MUSIC: CLICK HERE To buy MY OIL PAINTINGS contact me : CLICK HERE MY DIGITAL ART in LIMITED EDITION : CLICK HERE EN : Welcome everyone to my website! 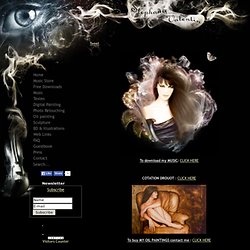 My name is Stephanie Valentin I'm a french violinist, painter and sculptor.I will often put new artwork, free wallpapers,tutorials, videos or sheet music there...Look at the news below or subscribe to my Newsletter.I hope you'll have a pleasant trip here, 00AngelicDevil00 (Drea) on deviantART. ELENA DUDINA.