A magazine of culture and polemic 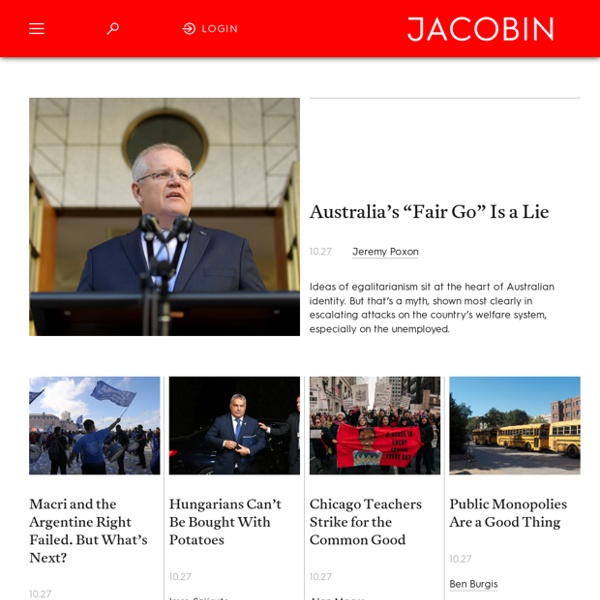 About WarIsACrime.org In October 2012 we added the names HumansForPeace.org and HumanBeingsForPeace.org because we think such a group is needed. Veterans For Peace and Code Pink Women For Peace and various nationalities for peace are all terrific efforts. Humans For Peace is a way to include everyone. Join by making yourself a username and password on this site! Quite Interesting The first 52 episodes have been taken down so that they can be scrubbed, remastered, packaged together and released as No Such Thing As A Fish - The Complete First Year of Facts. The release will include not only the first 52 episodes, but also a string of bonus content as well as this beautiful, exciting, oh-so-rock-n-roll exclusive vinyl episode. You can pre-order now, and your record will come with a code that allows you to download the full first year of No Such Thing As A Fish. Until then, we hope you continue to feast your ears on episodes 53 onwards and our International Factball series, not to mention a new podcast every Friday - all of which are available for free on Soundcloud, iTunes or wherever you usually get them.

Main Page 2. Act normal If you are a high-risk source, avoid saying anything or doing anything after submitting which might promote suspicion. In particular, you should try to stick to your normal routine and behaviour. 3. Remove traces of your submission ZNet Top Welcome to ZCommunications. The site has ZNet and ZMag content, topic and place pages under the Focuses link in the top menu - reading lists and whole books, debates, interviews, multimedia, Blogs, Forums, comments, a Store, Sustainer program, WISC, and more. Relating to Z To participate more deeply and generally in ZCommunications, please become a Sustainer. Why Isis fights For more than a century, Dabiq was one of northern Syria’s forsaken villages, a speck on a vast agricultural plain between the Turkish border and the deserts of Iraq, which hardly seemed likely to shape the fate of nations. A weathered sign at its entrance said 4,000 people lived there, most of whom appeared to have left by 2013, driven out over time by a lack of work – and lately by insurrection. For the first three years of Syria’s civil war, the arrival of a strange car would lure bored children to the town’s otherwise empty streets, scattering cats and chickens as they scampered after it. Little else moved. Dabiq’s few remaining men worked on the odd building project: a half-finished mosque, a humble house for one local who had just returned after 10 years labouring in Lebanon, or a fence for the shrine that was the town’s only showpiece – the tomb of Sulayman ibn Abd al-Malik.

Harvard Seeks to Jolt University Teaching - Teaching By Dan Berrett Cambridge, Mass. A growing body of evidence from the classroom, coupled with emerging research in cognitive psychology and neuroscience, is lending insight into how people learn, but teaching on most college campuses has not changed much, several speakers said here at Harvard University at a daylong conference dedicated to teaching and learning. The World Factbook The Office of Public Affairs (OPA) is the single point of contact for all inquiries about the Central Intelligence Agency (CIA). We read every letter, fax, or e-mail we receive, and we will convey your comments to CIA officials outside OPA as appropriate. However, with limited staff and resources, we simply cannot respond to all who write to us. Contact Information Submit questions or comments online By postal mail: Central Intelligence Agency Office of Public Affairs Washington, D.C. 20505

Wealth ‘creators’ are robbing our most productive people There is an inverse relationship between utility and reward. The most lucrative, prestigious jobs tend to cause the greatest harm. The most useful workers tend to be paid least and treated worst. In Which These Are The 100 Greatest Writers Of All Time The 100 Greatest Writers of All Time by WILL HUBBARD and ALEX CARNEVALE Other lists of this kind have been attempted, none very successfully. We would like to stress that there is a crucial difference between "an important writer" and "a great writer"; the latter is at this time our sole interest. Graduate Degrees Norwich The world is ready for change. Are you ready to help change the world? Diplomacy is about managing international relations through communication, negotiation and critical thinking.

Decoding the Enigma of Satoshi Nakamoto and the Birth of Bitcoin Photo It is one of the great mysteries of the digital age. The hunt for Satoshi Nakamoto, the elusive creator of Bitcoin, has captivated even those who think the virtual currency is some sort of online Ponzi scheme. A legend has emerged from a jumble of facts: Someone using the name Satoshi Nakamoto released the software for Bitcoin in early 2009 and communicated with the nascent currency’s users via email — but never by phone or in person. Then, in 2011, just as the technology began to attract wider attention, the emails stopped. Suddenly, Satoshi was gone, but the stories grew larger.

The Awl - Be Less Stupid Thank you for stopping in at The Awl, a New York City-based web concern established in early 2009. The Awl intends to encourage a daily discussion of the issues of the day—news, politics, culture (and TV!)—during sensible hours of the working week. An Error Occurred Setting Your User Cookie This site uses cookies to improve performance. If your browser does not accept cookies, you cannot view this site. Setting Your Browser to Accept Cookies There are many reasons why a cookie could not be set correctly.