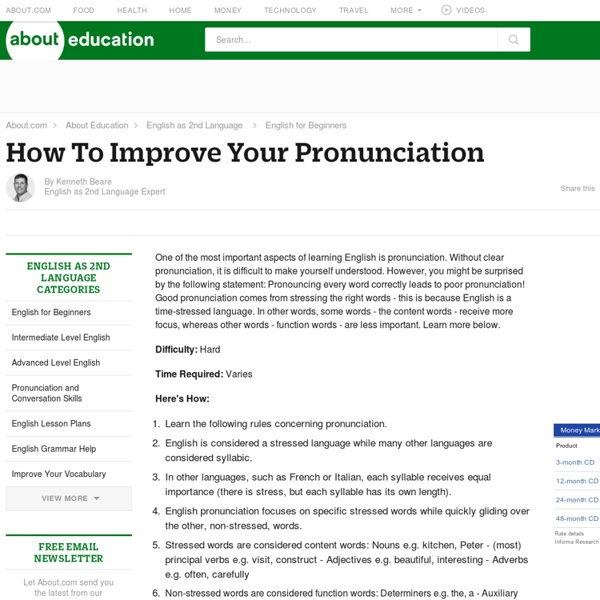 One of the most important aspects of learning English is pronunciation. Without clear pronunciation, it is difficult to make yourself understood. However, you might be surprised by the following statement: Pronouncing every word correctly leads to poor pronunciation! Good pronunciation comes from stressing the right words - this is because English is a time-stressed language. In other words, some words - the content words - receive more focus, whereas other words - function words - are less important. Difficulty: Hard Time Required: Varies Here's How: Learn the following rules concerning pronunciation. Tips: Remember that non-stressed words and syllables are often 'swallowed' in English.

Speaking a foreign language can change your personality In the book Me Talk Pretty One Day, humorist David Sedaris recounts learning to speak French as an adult under a vicious instructor. Fumbling in his attempts to master the new tongue, he feels powerless and vulnerable—almost like a different person entirely. Anyone who’s taken on the challenge of learning a new language can probably relate. Margarita, a Russian-American immigrant, came to the US at age 19 to escape anti-Semitism in the former Soviet Union. When she speaks Russian, she says, she feels “guarded, reserved, uncomfortable.” Similarly, Tony, who grew up speaking English and Spanish and went on to learn French, says that when he speaks French he feels “sophisticated, elegant, suave.” Indeed, research suggests that our perceptions of the culture associated with a given language can impact our behavior. The study found that subjects scored higher in extraversion, agreeableness, and conscientiousness when they took the English version of the test.

Parler distinctement - Améliorez votre prononciation en anglais Reduce your accent in English Achieving perfect English pronunciation is the holy grail of most English students. With so many different sounds and an often haphazard spelling system, English is not an easy language to pronounce. But without making some effort, your accent will overshadow all your efforts at learning English. You may give a grammatically correct speech only to find that your listener didn't understand a word. To improve your accent, spend time listening and carefully imitating words that are difficult for you to pronounce. Small pronunciation differences can completely change a word's meaning, so use this list of easily mispronounced words to avoid misunderstandings! Have you ever tried to say a word, and you just couldn't say it properly? Find out how to improve your English pronunciation and stretch your vocal chords with these terrific tips! Helli, Ken and Paolo are discussing what 'resources' mean. Daren is confiding in Helli about his trouble with English pronunciation

How to Improve Your English Pronunciation by Liliya Pavlova It's often found that people struggle to hold up a conversation for too long because they are not able to pronounce words correctly. Many people find it hard to get a job because they are not able to communicate well enough. No matter how talented and skilful you are, if the person you are talking to cannot understand what you are saying, you will not be able to succeed. This is why you should improve your English pronunciation. There are several resources you can use to improve your English pronunciation. Listen to others Probably the easiest way to learn how to pronounce words correctly is to expose yourself to native-speakers. Practice as much as you can As they say, practice makes a man perfect; you should practice the language as much as you can. Don't give up For non-native speakers, learning English is not an easy job especially if your pronunciation is not up to the mark. Read out loud Grab some magazines or books and read out loudly. Be patient