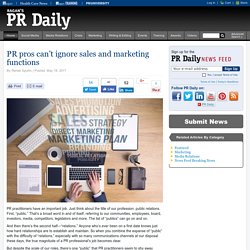 Just think about the title of our profession: public relations. First, “public.” That’s a broad word in and of itself, referring to our communities, employees, board, investors, media, competitors, legislators and more. The list of “publics” can go on and on. And then there’s the second half—“relations.” But despite the scale of our roles, there’s one “public” that PR practitioners seem to shy away from—those buying products and services. Mapping the Future of PR. Ready when you are. BBC Academy - Production - Pitching. 21 Amazing Sites With Breathtaking Free Stock Photos. 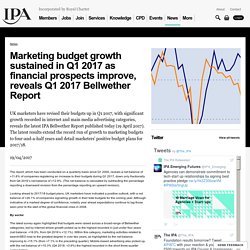 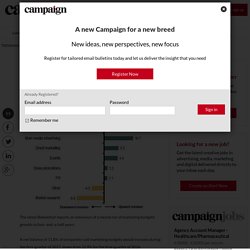 A net balance of 11.8% of companies said marketing budgets would increase during the first quarter of 2017, down from 12.9% for the final quarter of 2016. The outlook for 2017/18 budgets remain positive among marketers too, the report suggests, with a net balance of 26.1% of companies signalling growth for the coming year. Meanwhile, 32% of companies surveyed reported an improvement in their financial prospects, compared with the less than 19% that thought things would be worse during the quarter. The net balance – up 13.9% – is an improvement from 11.2% recorded in Q4 2016.

However, prospects for the wider industry remain gloomy. Internet growth reached the highest level recorded in just under four years, with a net balance of 16.9%, up from 12.1% in the previous quarter, with search and SEO rising by its greatest degree in over two years to 15.1%. GCR17: Students Want Purpose, Worry PR Jobs Won’t Deliver. LOS ANGELES—More than 80% of public relations students interviewed for the 2017 Global Communications Report—a partnership between USC Annenberg’s Center for Public Relations and The Holmes Report—say it is important to work for a company with a well-defined social purpose (84%) and in an industry with a well-defined social purpose (81%). 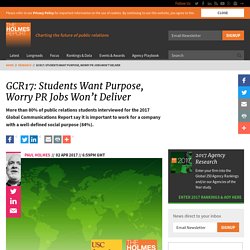 But fewer than two-thirds (60%) believe the public relations industry itself has a well-defined social purpose. And while 81% say they want a job that will make a positive difference to society, only 50% believe that’s likely to true of a job in PR. And large numbers of students believe the PR industry is falling short when it comes to many of their other career priorities. Never mind advertising, insight and planning should be core skills in PR - Prolific North. The core skills in public relations should be insight and planning, that’s the view of Phil Reed, managing director at Aberfield Communications. 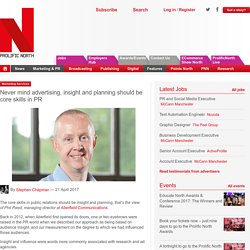 Back in 2012, when Aberfield first opened its doors, one or two eyebrows were raised in the PR world when we described our approach as being based on audience insight, and our measurement on the degree to which we had influenced those audiences. Insight and influence were words more commonly associated with research and ad agencies. The PR industry has certainly progressed over the past five years, and the message that PR needs to do much more than raise ‘awareness’ is starting to get through. Is a PR Firm Really Worth the Money? – Gini Dietrich – Medium. There comes a time in every career where you work yourself out of a job. 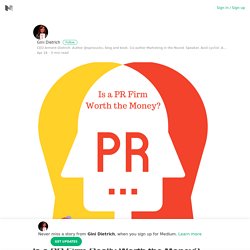 It’s inevitable, but it also marks the sign of success. As painful as it is to lose a client, I always tell my team when we lose one because we’ve taught them how to fish, that means we’ve done our job. I am reminded of this as I troll the web and see questions such as: Is a PR firm really worth the money? Media workflow and content management in a digital era: Unlock the value from your investments. By Tom Casey, Harry Hawkes, Raj Parande, Will Cotter Originally published by Booz & Company: February 19, 2013 The media industry is evolving. 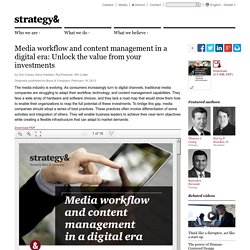 As consumers increasingly turn to digital channels, traditional media companies are struggling to adapt their workflow, technology, and content management capabilities. They face a wide array of hardware and software choices, and they lack a road map that would show them how to enable their organizations to reap the full potential of these investments.

To bridge this gap, media companies should adopt a series of best practices. Loading... Media workﬂow and content management in a digital eraUnlock the value from your investments Strategy& Contacts Beirut Gabriel ChahinePartner+961-1-985-655gabriel.chahine @strategyand.pwc.com Chicago Tom CaseyPartner+1-312-578-4627tom.casey @strategyand.pwc.com. Higher Apprenticeship for Public Relations. The Power of Storytelling in PR. “We are bombarded with information. 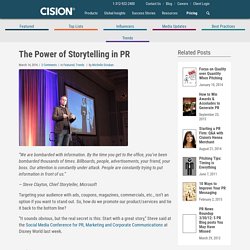 By the time you get to the office, you’ve been bombarded thousands of times. Billboards, people, advertisements, your friend, your boss. Our attention is constantly under attack. Your 14 point crisis communications checklist. By Adam Fisher. 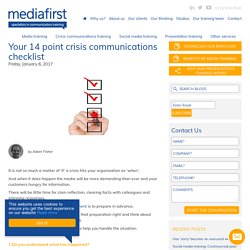