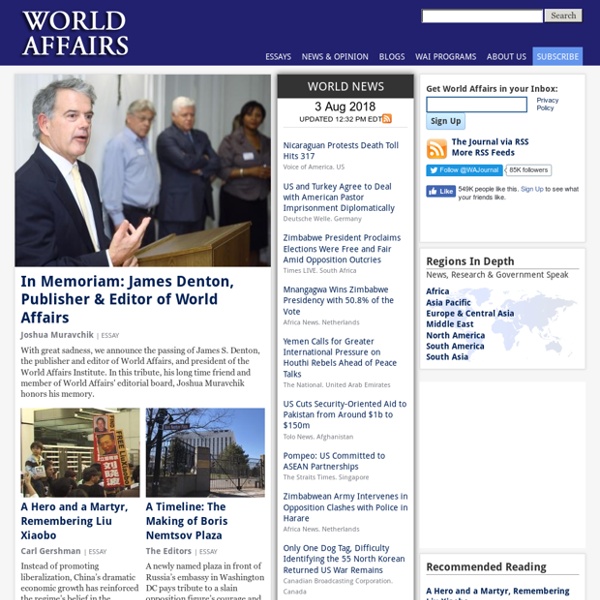 Why Trump and his team want to wipe out the EU The Trump administration not only dislikes the European Union, it is out to destroy it. The trip by the US secretary of state, Mike Pompeo, to Europe last week was episode three of the onslaught, designed to play on east-west divisions within the EU. Episode one was Donald Trump’s 2017 Warsaw speech, infused with nativist nationalism. Episode two was Trump’s 2018 moves on tariffs, and his tearing up of key agreements such as the Iran nuclear deal and the Intermediate-range Nuclear Forces (INF) treaty.

Angela Merkel criticises US isolationism, urging 'win-win solutions' Angela Merkel has turned her fire on America’s “home alone” policies, saying multilateral bodies cannot simply be smashed up, and warned the US president, Donald Trump, that Europe must not be excluded from discussions on future nuclear disarmament, Syria or trade. Warning of a collapse of the international order into tiny parts, the German chancellor said: “We cannot just smash it. We need to cooperate.” Merkel quoted the US Republican senator Lindsey Graham as saying: “Multilateralism may be complicated, but it’s better than simply staying at home alone.” “Now that we see great pressure on the classic order we are used to, the question now is: do we fall apart into pieces of a puzzle and think everyone can solve the question best for himself alone?” Merkel said, adding that it’s better to “put yourself in the other’s shoes ... and see whether we can get win-win solutions together”.

John Mearsheimer and Stephen Walt · The Israel Lobby: the Israel Lobby · LRB 23 March 2006 For the past several decades, and especially since the Six-Day War in 1967, the centrepiece of US Middle Eastern policy has been its relationship with Israel. The combination of unwavering support for Israel and the related effort to spread ‘democracy’ throughout the region has inflamed Arab and Islamic opinion and jeopardised not only US security but that of much of the rest of the world. This situation has no equal in American political history. Why has the US been willing to set aside its own security and that of many of its allies in order to advance the interests of another state?

The World Factbook People from nearly every country share information with CIA, and new individuals contact us daily. If you have information you think might interest CIA due to our foreign intelligence collection mission, there are many ways to reach us. If you know of an imminent threat to a location inside the U.S., immediately contact your local law enforcement or FBI Field Office. For threats outside the U.S., contact CIA or go to a U.S. Bill Gates says poverty is decreasing. He couldn’t be more wrong Last week, as world leaders and business elites arrived in Davos for the World Economic Forum, Bill Gates tweeted an infographic to his 46 million followers showing that the world has been getting better and better. “This is one of my favourite infographics,” he wrote. “A lot of people underestimate just how much life has improved over the past two centuries.” Of the six graphs – developed by Max Roser of Our World in Data – the first has attracted the most attention by far. It shows that the proportion of people living in poverty has declined from 94% in 1820 to only 10% today.

Institute for Advanced Studies In Culture: Publications - The Hedgehog Review Current Issue Summer 2017 (19.2) The accelerating urbanization of the world can be viewed as either the hope or the bane of our global future. Why the media fails to cover Palestine with accuracy and empathy Glasgow, Scotland - Often dubbed an open-air prison on account of Israel's and Egypt's ongoing air, land and sea blockade of the coastal enclave, Gaza is, according to Amnesty International and several other rights groups, on the brink of a humanitarian disaster. In February, Antonio Guterres, the United Nations secretary-general, highlighted the crisis, saying that the near two million Palestinians of the besieged strip "remain mired in increasing poverty and unemployment, with limited access to adequate health, education, water and electricity". But the mainstream media does not always succeed in telling Palestine's contemporary story with accuracy and empathy. On Thursday, in the Scottish city of Glasgow, experts discussed the media's role in covering one of the most pressing and divisive issues in international politics.

The embargo on Cuba failed. Let’s move on. [Opinion] HAVANA — It has been 60 years since Fidel Castro marched into Havana, so it’s time for both Cuba and the United States to grow up. Let’s let Cuba be a normal country again. Cuba is neither the demonic tyranny conjured by some conservatives nor the heroic worker paradise romanticized by some on the left. It’s simply a tired little country, no threat to anyone, with impressive health care and education but a repressive police state and a dysfunctional economy. How diverse the new United States' leadership really is out of 23 members of cabinet are white men Cabinet members are among the most powerful people in the county. Their job is to lead their respective executive departments and advise the president. The cabinet consists of the Vice President and 15 executive departments ranked according to their presidential line of succession. Additional members can be designated by the president and are Cabinet-ranked, but do not hold any other additional powers.

The Brexiteers’ idea of how WTO rules would work is pure fantasy A £2bn contingency fund, 3,500 troops on standby, and reserved space on ferries: these are some of the government’s plans for a no-deal Brexit. With Theresa May stepping up the planning, what was once seen as economic disaster for Britain, is being rebranded as a “clean break” from the EU on World Trade Organisation terms. Jacob Rees-Mogg tweets: “WTO terms are much better than remaining shackled to the EU.” Wetherspoon chairman Tim Martin is currently touring the country telling anyone who will listen that only “project fear” thinks Britain being relegated to WTO terms will be damaging and that a no-deal Brexit will allow us to become one of the “champions of free trade” once again. With this narrative gaining popularity in some corners, it has brought the WTO into the national conversation in a way that hasn’t happened before. The only problem was that everyone quickly realised trading on WTO terms did not meet the reality of their economic needs.