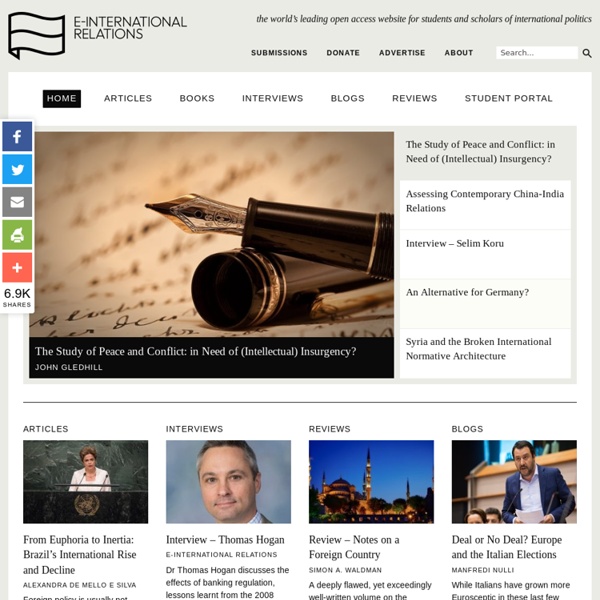 Do Drone Strike Assassinations Render Conceptions of ‘Just War’ Redundant? War on Terror drone policies problematise classic Just War (JW) approaches. However, JW theory inspired international law itself has the ability to ensure accountability. Veiled Colonialism: A Feminist Criticism of the Half the Sky Movement By exercising both the Western colonialist stance and discursive colonialism, “Half the Sky” acts as a roadblock for the very women it supports. Yemen’s Water Scarcity as a Threat to National Security

Strengthening democracy through private enterprise and market oriented reform Sparking Debate on Economic Policy in Nepal Samriddhi wins an award at the Asia Liberty Forum in Kuala Lumpur. By Sarita Sapkota, Samriddhi The Duck of Minerva Dear all, I'm currently the program chair for ISA Midwest 2014. The conference will take place from November 7th to 9th at the Hilton Ballpark in St. Louis. This is a fabulous conference - one I'd really recommend for all scholars but one that is especially inviting for junior scholars.

Internships - World Harvest Mission *To increase chance of getting your top internship placement, we encourage you to send in your application as soon as possible. We anticipate a high volume of applications this year. Censoring on one end, "outliers" on the other, what can we do with the middle? - Statistical Modeling, Causal Inference, and Social Science This post was written by Phil. A medical company is testing a cancer drug. They get a 16 genetically identical (or nearly identical) rats that all have the same kind of tumor, give 8 of them the drug and leave 8 untreated…or maybe they give them a placebo, I don’t know; is there a placebo effect in rats?. Anyway, after a while the rats are killed and examined. If the tumors in the treated rats are smaller than the tumors in the untreated rats, then all of the rats have their blood tested for dozens of different proteins that are known to be associated with tumor growth or suppression.

missionyear Mission Year is a year long program where Christian young people live in an urban neighborhood volunteering, worshiping, and loving their neighbors.It’s an opportunity for anyone 18-29, single or married, to spend a year following Jesus’ command to “Love the Lord your God, and love your neighbor as yourself.” By partnering with a local church, volunteering at a service site, and spending time with neighbors, Mission Year Team Members effectively impact their communities while catching a deeper vision for what the Kingdom of God is like. Mission Year Day-to-Day

521 - Cartography’s Favourite Map Monster: the Land Octopus by Frank Jacobs Over the centuries, the high seas have served as a blank canvas for cartographers’ worst nightmares. They have dotted the oceans with a whole crypto-zoo of island-sized whales, deathly seductive mermaids, giant sea serpents, and many more - a whole panoply of heraldic horrors. As varied as this marine bestiary is, mapmakers have settled on a single, favourite species for land-based beastliness: the octopus. Real octopi are sea creatures, of course. But the Cartographic Land Octopus - CLO for short - need not worry about being in the right ecosphere.

Dangerous ignorance: The hysteria of Kony 2012 Kampala, Uganda - From Kampala, the Kony 2012 hysteria was easy to miss. I'm not on Facebook or Twitter. I don't watch YouTube and the Ugandan papers didn't pick up the story for several days. But what I could not avoid were the hundreds of emails from friends, colleagues, and students in the US about the video by Invisible Children and the massive online response to it. I have not watched the video. As someone who has worked in northern Uganda and researched the war there for more than a decade, much of it with a local human rights organisation based in Gulu, the Invisible Children organisation and their videos have often left me infuriated - I remember the sleepless nights after I watched their "Rough Cut" film for the first time with a group of students, after which I tried to explain to the audience what was wrong with the film while on stage with one of the filmmakers.