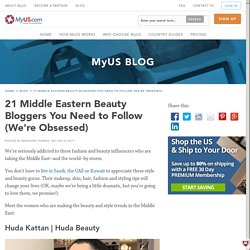 You don't have to live in Saudi, the UAE or Kuwait to appreciate these style and beauty gurus. Their makeup, skin, hair, fashion and styling tips will change your lives (OK, maybe we're being a little dramatic, but you're going to love them, we promise!). Meet the women who are making the beauty and style trends in the Middle East: Huda Kattan | Huda Beauty Huda is glam girl all the way. Follow Huda on Instagram and bookmark her blog. Sondos Alqattan Sondos is a famous makeup artist from Kuwait. Follow Sondos Alqattan on Instagram and check her out on YouTube. Dalal AlDoub This Kuwaiti stylist and makeup guru crafts amazing looks.

Visit her beautiful blog and follow her on Instagram. Ruba Zai | Hijab Hills Ruba is known for emphasizing modesty in fashion, but don't assume for a second that takes away from her style. Read her blog at HijabHills, and find Ruba Zai on YouTube. جوجو آزاد: PRESS + EVENTS. We (the blog & I) are so honored to have our work that we are so passionate about featured in countless online, in-print, television, and radio features internationally! 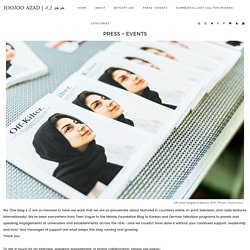 We've been everywhere from Teen Vogue to the Malala Foundation Blog to Korean and German television programs to panels and speaking engagements at universities and establishments across the USA--and we couldn't have done it without your continued support, readership, and love! Your messages of support are what keeps this blog running and growing. Thank you. To get in touch for an interview, speaking engagement, or brand collaboration, please see below! + May 23: "NYCxDESIGN: Redesigning Citizenship" | Brooklyn Fashion + Design Accelerator, tickets available here. Blogging in Iran - Wikipedia. Following a crackdown on Iranian media beginning in 2000 many Iranians turned to weblogging to provide and find political news.[1] The first Persian language blog is thought to have been created by Hossein Derakhshan, (in Canada), in 2001. 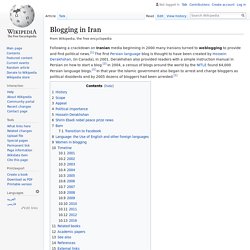 Derakhshan also provided readers with a simple instruction manual in Persian on how to start a blog.[2] In 2004, a census of blogs around the world by the NITLE found 64,000 Persian language blogs.[3] In that year the Islamic government also began to arrest and charge bloggers as political dissidents and by 2005 dozens of bloggers had been arrested.[1] History[edit] This Fashion Blogger Will Give You a New Appreciation for Street Style in Iran. Hoda Katebi is a twenty-year-old college student at the University of Chicago with a penchant for photography, a witty sense of humor, and a fierce love of fashion. 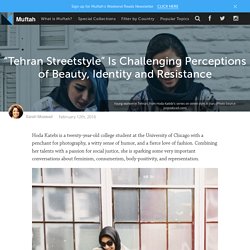 Combining her talents with a passion for social justice, she is sparking some very important conversations about feminism, consumerism, body-positivity, and representation. Iranian fashion blogger, photographer and writer Hoda Katebi (source: joojooazad.com) Katebi is the founder of JooJoo Azad (Farsi for “free bird”), a fashion blog that she describes as “anti-capitalist, intersectional feminist, inclusive, body-positive [and] alternative.” Though it may sound like a daunting undertaking for one blog, the young writer, photographer, and activist seems up to the challenge. Advertisement Speaking over Skype, Katebi seems determined to leverage her love of fashion to take ownership over her own representation. Katebi’s most recent project is a testament to JooJooAzad’s visual, defiant mode of storytelling.

A Comparitive Study Of The Iran Cosmetic Industry. This essay has been submitted by a student. 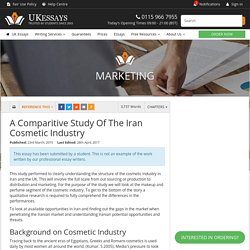 This is not an example of the work written by our professional essay writers. This study performed to clearly understanding the structure of the cosmetic industry in Iran and the UK. This will involve the full scale from out sourcing or production to distribution and marketing. Is Iran the next big market for advertisers and media companies? In the first of a new series looking at media and marketing’s ‘frontier markets’, M&M Global considers the rising potential of Iran for brands and media companies. 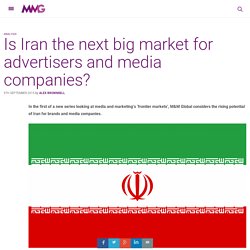 The recent decision by the United Nations Security Council to lift economic sanctions against Iran, in reward for co-operation over its nuclear programme, was not unanimously popular – it provoked anger in both Israel and US Congress, for a start. But many corporations will have been rubbing their hands in delight at the prospect of entering a largely untapped market.

Iran may not match the enormous scale of emerging markets like India or Indonesia, but rarely do hitherto inaccessible societies of 80 million sophisticated, educated consumers suddenly open up to Western brands. Since the 1979 revolution, life has been tough for global advertisers in Iran. Leading figures in the business community have been quick to talk up the potential of Iran, not least WPP’s chief executive Sir Martin Sorrell. Cultural complexities. Iran's job seekers lack practical skills. Students rest at a university while waiting for a final exam in Tehran, Jan. 18, 2009. 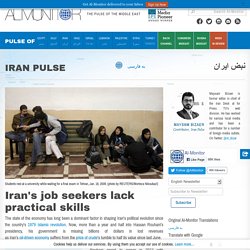 (photo by REUTERS/Morteza Nikoubazl) Author: Maysam Bizaer Posted February 16, 2015. A guide to Iran’s marketing opportunities, ‘stylish’ consumers and burgeoning media scene. In the first of a two-part interview, Dr Mir Damoon Mir, the founder and creative director of Tehran-based agency Zigma8, offers insights into how brands should go about connecting with consumers in Iran. 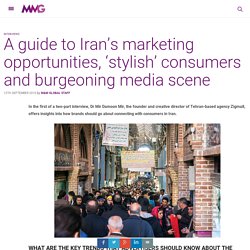 What are the key trends that advertisers should know about the Iranian market? “The first and most important thing to bear in mind when advertising and branding in Iran is that you are communicating with one of the most diverse audiences in the world. “This is a vast community from the north of Iran to the south, and from east to west, with an unsaturated market in the big cities. The biggest example of this is in Tehran, the capital, with a population of 12.5 million, which is one third more than New York. Safir - Retail Chain Stores of Luxury Products in Iran. Understanding the Middle Eastern luxury market. Chalboub's new speciality store, Tryano, is based in Abu Dhabi's luxury Yas Mall. 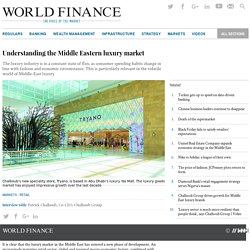 The luxury goods market has enjoyed impressive growth over the last decade Interview with: Patrick Chalhoub, Co-CEO, Chalhoub Group January 6, 2016 It is clear that the luxury market in the Middle East has entered a new phase of development. An increasingly maturing retail sector, global and regional macro-economic factors, combined with dampened consumer confidence is translating into a market that is growing much slower than before. The personal luxury goods market has enjoyed eight to 10 percent annual growth over the last decade, but is expected to slow down to around four to five percent in the next few years. Top Paying Jobs for Women in Iran.

Despite the low rate of employment for women in Iran there are some fields where women make up a high percentage of the workforce and earn a competitive salary. 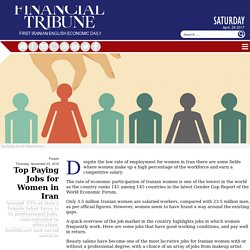 The rate of economic participation of Iranian women is one of the lowest in the world as the country ranks 141 among 145 countries in the latest Gender Gap Report of the World Economic Forum. Only 3.5 million Iranian women are salaried workers, compared with 23.5 million men, as per official figures. However, women seem to have found a way around the existing gaps. A quick overview of the job market in the country highlights jobs in which women frequently work.

Here are some jobs that have good working conditions, and pay well in return. Beauty salons have become one of the most lucrative jobs for Iranian women with or without a professional degree, with a choice of an array of jobs from makeup artist and esthetician to professional stylist. Top 10 Most Luxurious Shopping Malls in Iran - Real Iran. For many Iranians, shopping has become a near-obsessive ritual. Although traditional bazaars remain the favorite places to shop for most young people, they now face stiff competition from huge shopping malls all across the country. Palladium Mall (Tehran, Iran): Top Tips Before You Go - TripAdvisor. Cookies are Not Accepted - New York Times. TEHRAN — The low rumble of powerful engines reverberated against the high-rises of Zaferanieh, an upmarket neighborhood, as Porsches and Mercedeses lined up to enter the multistory parking lot of a fancy new shopping mall, the Palladium, the latest addition to Tehran’s shopping scene.

Iran may be facing a dangerous economic abyss, with an empty treasury, historically low oil prices and the continuing damage of Western economic sanctions, but one indicator is going through the roof: Developers have broken ground on a record 400 shopping malls across the country, 65 in Tehran alone. 10 Iran's Biggest Shopping Centers. Atlas Mall, Tehran Atlas Mall with infrastructure of approximately 140000 sqm is constructed on a land with over 11000 sqm in 19 floors. The complex is located on a great spot in Tehran’s Niavaran region. This amazing Shopping Center includes, 44429 sqm Parking spaces in 6 floors, 21935 commercial spaces and hyper markets in 4 floors, 4878 sqm food court, amusement and restaurant and 26418 sqm office spaces in 9 floors. Tehran - Wikipedia.

Tehran (Persian: تهران‎‎ – Tehrān, pronounced [tehˈrɒːn]) is the capital of Iran and Tehran Province. With a population of around 9 million in the city and 16 million in the wider metropolitan area,[3] Tehran is the most populous city of Iran, the 2nd-most populous city in Western Asia and the 3rd-largest metropolitan area in the Middle East. It is ranked 29th in the world by the population of its metropolitan area.[4] In the Classical era, part of the present-day city of Tehran was occupied by a Median city that in the Avesta occurs as Rhaga.[5] It was destroyed by the Mongols in the early 13th century, and remains now as a city in Tehran Province, located towards the southern end of the modern-day city of Tehran. List of Iranian cities by population - Wikipedia.

Deriving most of its revenue from the oil sector, the state owns and directly operates numerous enterprises and indirectly controls many companies affiliated with the security forces. The rule of law remains vulnerable to political interference and oppression. Turkey Demographics Profile 2016. Turkey Population (2017) Notes The Turkey Population (Live) counter shows a continuously updated estimate of the current population of Turkey delivered by Worldometers' RTS algorithm, which processes data collected from the United Nations Population Division. The Population of Turkey (1950 - 2017) chart plots the total population count as of July 1 of each year, from 1950 to 2017.

The flame-haired Brit, whose A-list clientele includes everyone from Kim Kardashian to Kate Moss, is beloved not just for her skill in getting celebs red carpet-ready, but also for her eponymous line of ridiculously good beauty products. She’s bringing star power to the people, one perfectly smudged cat-eye at a time. 301 Moved Permanently. Charlotte Tilbury Instant Magic Dry Sheet Mask. Beauty and Personal Care in Turkey. New Report Guarantee. How oil sanctions may have HELPED Iran’s economy. Statistical Glance at Women's Employment in Iran. Hiland Beauty. What next for Iran’s economy? Iran: from isolation to economic cooperation. The Revolutionary Economy. How Iranian fashion and freedom has changed over the past 100 years. Euromonitor International - Log in. Iran cosmetics Market. Iran is world's biggest emerging market since collapse of Soviet Union, says Lord Lamont. Resurgent Iran is the last great emerging market.