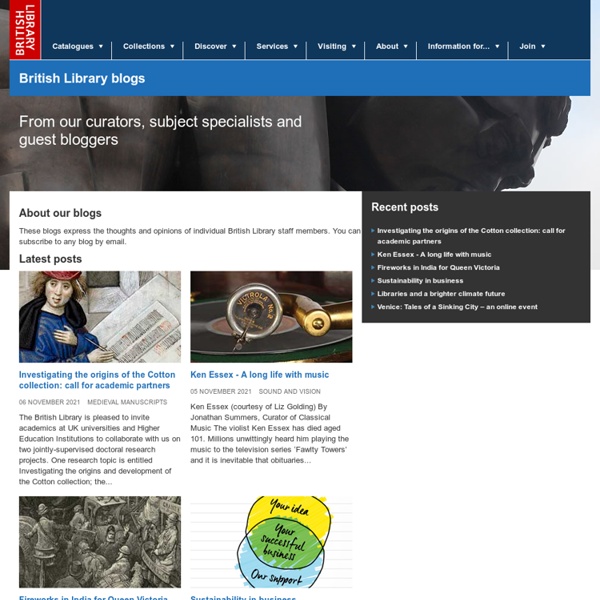 Sport and Society Blog Simone Bacchini writes: It sometimes feels like the case for sport as a vehicle for social change is a bit overstated. Yet, the announcement that London has bid to host the 2018 Gay Games ( might be, well, a game changer. The Gay Games was started in San Francisco, in 1982. Sporting events for minority groups, some of them facing varying degrees of discrimination have a double function. Sport is one of the favourite arenas in which socially approved norms of gender behaviour are displayed, learned, and reinforced. Obviously, for many LGBT people sport has never been an issue: they simply aren’t interested. The Paralympics has been an important tool in changing views of and attitudes towards disability. References Journal of Homosexuality. London Reference Collection: SPIS Journals Display (open access) Anderson, E. (2009). General Reference Collection: SPIS306.7662 (open access) Symons, C. (2010). Document Supply: m11/.11320

Americas Collections Blog As a historian I get very excited about old letters, diaries, account books and inventories – but once in a while there are other ‘records’ that trump almost everything else. I had one of those moments this week when I returned to George Washington’s Mount Vernon. Over the past six years I have been many times to Washington’s estate in Virginia (just south of Washington DC) – first to research my book Founding Gardeners and then to give talks about the book. By now I go there to see the changes in the gardens (of which there are many, such as the fabulous restoration of the Upper Garden) and to meet my friend Dean Norton who is the Director of Horticulture there. Last Wednesday’s visit, however, was one of the most memorable. Mount Vernon’s Pecan before it was taken down (photo by Dean Norton) Dean explained to me that they had finally decided to take down the tree because it threatened the house. It took four days to take the giant down – with a crane. Click here to see the film.

Decoding the Enigma of Satoshi Nakamoto and the Birth of Bitcoin Photo It is one of the great mysteries of the digital age. The hunt for Satoshi Nakamoto, the elusive creator of Bitcoin, has captivated even those who think the virtual currency is some sort of online Ponzi scheme. A legend has emerged from a jumble of facts: Someone using the name Satoshi Nakamoto released the software for Bitcoin in early 2009 and communicated with the nascent currency’s users via email — but never by phone or in person. Then, in 2011, just as the technology began to attract wider attention, the emails stopped. Suddenly, Satoshi was gone, but the stories grew larger. Over the last year, as I worked on a book about the history of Bitcoin, it was hard to avoid being drawn in by the almost mystical riddle of Satoshi Nakamoto’s identity. This video is not currently supported on your browser. Continue reading the main story Video Mr. At that event, Mr. But Mr. This history is more than just a matter of curiosity. Mr. After Mr. Mr. I met Mr. Mr. It is, though, Mr. Mr. Mr. Mr.

Sound Recordings Blog Cheryl Tipp, Natural Sounds Curator writes: Over the past 5 weeks, listeners of BBC Radio 4 have been treated to a series dedicated entirely to sound and its many roles in human culture over the past 100,000 years. Noise: a Human History, written and presented by Professor David Hendy and made in collaboration with the British Library's Sound Archive, has explored a multitude of subjects, from the power of great orators to the significance of resonant spaces. Episode 25, Capturing Sound, looks at new technologies that emerged during the latter half of the 19th Century, making it possible to record and thereby transform sound from something previously transient and elusive. The British Library has an extensive collection of both early recordings and the equipment used to record and playback these sounds. Edison Home Phonograph (1900) Don Bradman, Australian cricketer - How it's Done Amy Johnson, pioneer aviator - The Story of my Flight Franklin D.

Untold Lives Continuing with the series on William Henry Fox Talbot (1800-1877), we look here at his lifelong interest in botany and some of the items now available to researchers through the British Library catalogue. Botany was one of Talbot’s favourite fields of study although he pursued it only as an occasional interest. Nevertheless he was extremely knowledgeable and held in high regard. In 1829 he was elected to the prestigious Linnean Society, today one of the oldest active botanical societies in the world. Talbot was also a member of the Horticultural Society of London, the Royal Botanic Society of London, and the Botanical Society of Edinburgh. From the age of 14, Talbot maintained a lively correspondence with eminent botanists such as Lewis Weston Dillwyn (1778-1855) and Sir William Jackson Hooker (1785-1865), and later with Reverend James Dalton (1764-1843). MS 88942/1/364 Detail of Talbot’s note on seeds sent to him by his nephew, Lieutenant Colonel Charles Edgcumbe (1838-1915)

The Embedded Librarian | Exploring New, Embedded Roles for Librarians in Organizations of All Types The Machiavelli of Maryland: adviser to presidents, prime ministers – and the Dalai Lama | Thomas Meaney People contact Edward Luttwak with unusual requests. The prime minister of Kazakhstan wants to find a way to remove ethnic Russians from a city on his northern border; a major Asian government wants a plan to train its new intelligence services; an Italian chemical company wants help settling an asbestos lawsuit with a local commune; a citizens’ group in Tonga wants to scare away Japanese dolphin poachers from its shores; the London Review of Books wants a piece on the Armenian genocide; a woman is having a custody battle over her children in Washington DC – can Luttwak “reason” with her husband? And that is just in the last 12 months. Luttwak is a self-proclaimed “grand strategist”, who makes a healthy living dispensing his insights around the globe. Luttwak believes that the logic of strategy contains truths that apply to all times and places. But his work is not limited to armchair theorising. But only in America was the career of Edward Luttwak possible. “I want them today.”