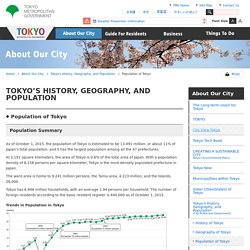 At 2,191 square kilometers, the area of Tokyo is 0.6% of the total area of Japan. With a population density of 6,158 persons per square kilometer, Tokyo is the most densely populated prefecture in Japan. The ward area is home to 9.241 million persons, the Tama area, 4.223 million, and the Islands, 26,000. Tokyo has 6.946 million households, with an average 1.94 persons per household. Trends in Population in Tokyo Sources: Statistics Division, Bureau of General Affairs, TMG; “Population of Tokyo (estimates)” Ministry of Internal Affairs and Communications; “Population Census” Population Change. Invest Tokyo:Tokyo's Special Economic Zones. The Competitiveness and Strengths of Tokyo Compared to Cities around the World Tokyo ranks high on every list of cities created by research institutions across the globe. 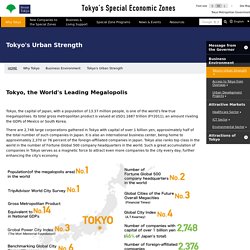 Tokyo is known for its outstanding market scale, accumulation of globally leading companies, substantial and punctual public transportation, excellent public safety, hospitality, and cleanliness. We encourage you to expand your business into Tokyo, a city that provides a sophisticated market and a charming living environment, and lead your company to new innovation and greater development. Global Power City Index. Top three potential barriers to foreign market entry - Trade Ready. Companies entering foreign markets might face problems or increased costs because of the business environment and the way in which companies operate. 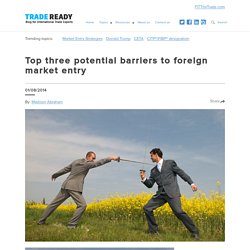 For example, marketing services might be prohibitively expensive. The banking system might be undeveloped, and certain payment mechanisms may be unavailable. Letters of credit might be unreliable or difficult to obtain. Japan: Environmental Issues, Policies and Clean Technology. By Brett SmithJun 16 2015 Welcome to Japan Japan is a nation comprised of four main islands and thousands of smaller islands located off the northern Pacific Coast of Asia. With just 18 percent of its land fit for settlements, Japan’s population tends to be clustered around major cities. Tokyo, the capital city, is the largest urban center in the world and home to 36 million people. Japanese society had been one of the most isolated in the world until a United States Navy commodore named Matthew C.

Today, Japan is home to the world’s third largest economy, despite a series of economic setbacks in the 1990s. Environmental Issues of Japan. Top 10 challenges of doing business in Japan. Disclaimer: This article was accurate at the time of publishing. 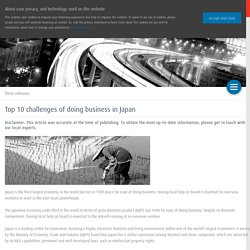 To obtain the most up-to-date information, please get in touch with our local experts. Japan is the third largest economy in the world but lies in 114th place for ease of doing business. Having local help on board is essential for overseas ventures to work in the east Asian powerhouse. The Japanese economy ranks third in the world in terms of gross domestic product (GDP), but 114th for ease of doing business. Doing business in Japan: Japan trade and export guide. 1. 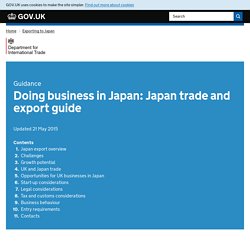 Japan export overview Japan is the world’s third largest economy in the world - bigger than the UK and Germany combined. In 2014 it made up 6% of world Gross Domestic Product (GDP). Japan remains the high-tech powerhouse economy of Asia. Japan ranks second in the 2013 Global Wealth Report. 62 Fortune 500 companies the highest number of millionaires in Asia Tokyo, the city with the most millionaires worldwide in 2012. Cookie wall. Close These Terms of Use, including the Privacy and Cookie Statement, govern the use of Arcadis' website and apps. 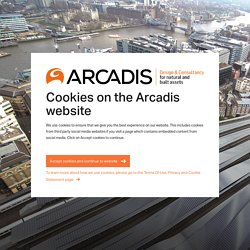 They may be changed by posting amended versions. You are advised to regularly read them for possible changes. Home. Key Facts. Cath Kidston Careers. Cath opened her first shop in London’s Notting Hill. 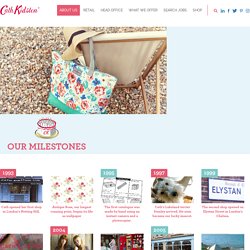 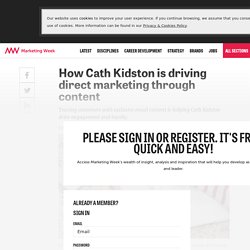 Ecommerce director Lynn Ritson says email is particularly useful in building excitement in the lead up to key events, such as the release of the brand’s first collaboration with Disney on 26 September. In the weeks prior to the launch the team teased email subscribers with exclusive imagery from the collection. When consumers were offered the chance to buy products from the range in a subsequent email it attracted a 69% open rate and 52% click-through rate. “We’re lucky as our brand lends itself perfectly to being content-focused and as we design our own prints we can bring to life the story and inspiration behind each one, which naturally leads to interest,” explains Ritson. Bags, Fashion, Home & More.

How Cath Kidston lured in high-powered women with a passion for polka dots. Personally, I sit on the side of the fans – and in fact, her business has a small but not insignificant role in the success of Green & Black’s. 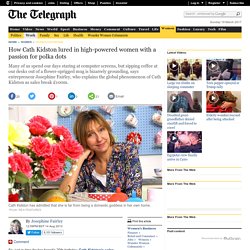 Every single night after work, my husband/ business partner and I would walk the streets of Notting Hill, downloading our day – brainstorming, discussing staff issues and coming up with ideas for new chocolate deliciousness. In 1993, a little store opened on our ‘beat’, selling vintage wallpaper and fabrics, and the sort of cleaned-up car boot sale finds many women who were too busy/ prissy to go to car boot sales lusted after. Cath Kidston to expand in Asia after Hong Kong firm's takeover. Cath Kidston, the fashion brand famous for its floral patterns, is set for significant expansion in Asia after it was taken over by a Hong Kong-based investment firm. 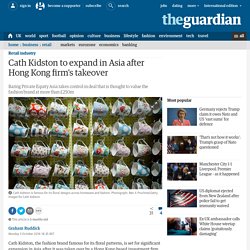 Baring Private Equity Asia has bought out TA Associates, a US private equity company, to take control of Cath Kidston. EMMA BRIDGEWATER LIMITED. Free business summary taken from official companies house information. Free alerts. Registered as 01943787. Starbucks to support Emma Bridgewater mugs with digital offensive. Starbucks has struck a partnership with the British pottery firm, which is making 6,000 limited edition mugs, as the coffee chain moves to tap into the fervour around the Diamond Jubilee and London 2012. The mugs will be priced at £19.95 and be available for a limited period. “Toast & Marmalade And Other Stories” by Emma Bridgewater. Liberty Meets Emma Bridgewater. Long-time Liberty favourite and leading pottery-maker Emma Bridgewater has been flying the flag for English-made earthenware since her brand’s inception in 1985.