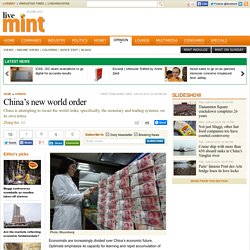 Optimists emphasize its capacity for learning and rapid accumulation of human capital. Pessimists focus on the rapid decline of its demographic dividend, its high debt-to-gross domestic product (GDP) ratio, the contraction of its export markets, and its industrial overcapacity. Stateless and left out at sea. The images of thousands of emaciated migrants on boats sent back to sea by Thailand, Malaysia and Indonesia, and reports of the discovery of the mass graves of trafficked people in Thailand and Malaysia have together done what human rights activists have been trying to achieve for decades. 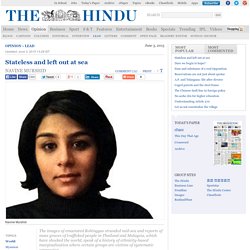 They have drawn international attention to the plight of thousands of Rohingya people who have been deemed stateless by the Myanmar government for more than 40 years as well as the issue of human trafficking in South and Southeast Asia. It appears that the images have managed to shock the world but this is not a new phenomenon.

Nor can it be resolved just by a one-time acceptance of the migrants into these or other countries.While recent reports suggest that Malaysia and Indonesia will no longer turn away migrants, these horrifying images speak of a history of ethnicity-based marginalisation that has turned certain ethnic groups into perpetual victims of systematic oppression. Exit as escape. Stateless and left out at sea. AIIB and Chinese strategy. Next month, the Asian Infrastructure Investment Bank (AIIB) will hold its first general meeting, the aim being to launch operations before the end of the year. 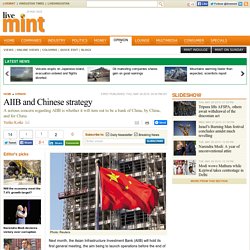 And now China has doubled down on its effort to secure a controlling role in the new bank by increasing its initial investment from a planned $50 billion to $100 billion. Why the Irish vote is important. Yuval Noah Harari: the theatre of terror. As the literal meaning of the word indicates, terror is a military strategy that hopes to change the political situation by spreading fear rather than by causing material damage. 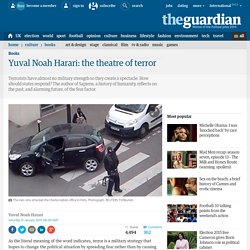 This strategy is almost always adopted by very weak parties, who are unable to inflict much material damage on their enemies. Of course, every military action spreads fear. But in conventional warfare, fear is a byproduct of material losses, and is usually proportional to the force inflicting the losses. The irresistible rise of the renminbi. By the end of this year, the International Monetary Fund (IMF) will decide whether the Chinese renminbi will join the euro, the Japanese yen, the British pound and the US dollar in the basket of currencies that determines the value of its international reserve asset, the Special Drawing Right (SDR). 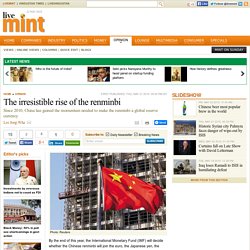 China is pushing hard for the renminbi’s inclusion. Should it be admitted? The IMF created the SDR in 1969 to supplement existing reserve currencies, thereby providing the global financial system with additional liquidity. As it stands, the SDR’s role remains largely limited to IMF operations; its share in global financial markets and central banks’ international reserves is negligible.

Why India Is Building The Longest Border Wall In The World. Modi’s China Visit: Asia’s New Strategic Quadrangle - Carnegie Endowment for International Peace. Prime Minister Narendra Modi’s visit to China must be seen against the backdrop of an increasingly volatile Asia. 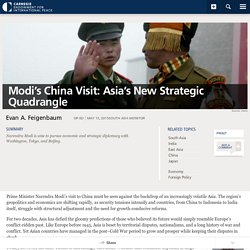 The region’s geopolitics and economics are shifting rapidly, as security tensions intensify and countries, from China to Indonesia to India itself, struggle with structural adjustment and the need for growth-conducive reforms. For two decades, Asia has defied the gloomy predictions of those who believed its future would simply resemble Europe’s conflict-ridden past. Like Europe before 1945, Asia is beset by territorial disputes, nationalisms, and a long history of war and conflict. Yet Asian countries have managed in the post–Cold War period to grow and prosper while keeping their disputes in check. Today, however, the Indo-Pacific is increasingly turbulent. Modi in China: The Nuclear Dimension - Carnegie Endowment for International Peace. The idea of civil nuclear cooperation between India and China might sound counter intuitive, but has long been in the realm of interesting possibilities between the two countries. 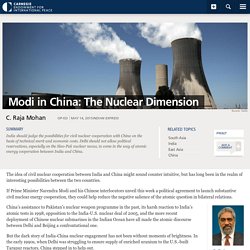 If Prime Minister Narendra Modi and his Chinese interlocutors unveil this week a political agreement to launch substantive civil nuclear energy cooperation, they could help reduce the negative salience of the atomic question in bilateral relations. China’s assistance to Pakistan’s nuclear weapon programme in the past, its harsh reaction to India’s atomic tests in 1998, opposition to the India-U.S. nuclear deal of 2005, and the more recent deployment of Chinese nuclear submarines in the Indian Ocean have all made the atomic discourse between Delhi and Beijing a confrontational one. Pacific Partnership: Strengthening U.S.-India Relations - Carnegie Endowment for International Peace. President Obama’s January visit to India was, by most measures, a symbolic success. 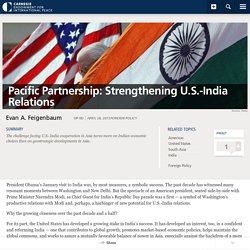 The past decade has witnessed many resonant moments between Washington and New Delhi. But the spectacle of an American president, seated side-by-side with Prime Minister Narendra Modi, as Chief Guest for India’s Republic Day parade was a first — a symbol of Washington’s productive relations with Modi and, perhaps, a harbinger of new potential for U.S. -India relations. Why the growing closeness over the past decade and a half? For its part, the United States has developed a growing stake in India’s success. In this sense, Modi’s spirited outreach to Japan, Singapore, and other U.S. partners in the Pacific has stirred American interest. Modi, for his part, clearly seeks a United States that helps to facilitate his economic goals — faster growth, technology acquisition and co-production, and expanded FDI in infrastructure and manufacturing. 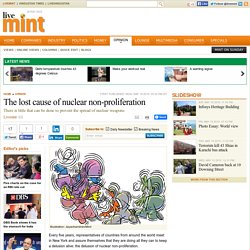 This year the Review Conference of the Parties to the Treaty on the Non-Proliferation of Nuclear Weapons (NPT) began its session in April and will end its deliberations on 22 May after reaffirming its commitment to preventing the “spread of nuclear weapons and weapons technology, to promote co-operation in the peaceful uses of nuclear energy and to further the goal of achieving nuclear disarmament and general and complete disarmament”.

In theory, the idea of nuclear non-proliferation seems prudent from a security perspective: a binding commitment to prevent more countries from acquiring nuclear weapons. In reality, such prudence could be translated into action, if it was a fair and actionable plan. Unfortunately, it isn’t. Best Psychology Programs. Ranked in 2013 | Psychology Rankings Methodology Studying the intricacies of the human experience is central to a psychology program. 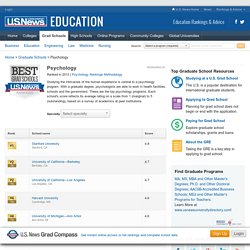 With a graduate degree, psychologists are able to work in health facilities, schools and the government. These are the top psychology programs. Each school's score reflects its average rating on a scale from 1 (marginal) to 5 (outstanding), based on a survey of academics at peer institutions. Specialty Unlock This Information. MA in International Relations : International relations, security and global governance : ... : Study with us. Dissertation (International Relations) 45 credits Summer teaching, year 1 This module provides you taking the programme with the opportunity to complete under expert supervision a dissertation on a topic of your choosing relevant to the course themes.

The subject will be chosen in consultation with the Programme Convenor. You will embark on preparation of the dissertation following completion of the Research Methods and Professional Skills module and submission of a research outline. A desk-based or original empirical study will be undertaken, enabling you to pursue in-depth research on an aspect of international relations. International Relations. Cardiff University - Course Finder - International Relations (MSc Econ)

School of Sociology, Politics and International Studies. MSc International Relations. Research. Is China-Pakistan 'silk road' a game-changer? - BBC News. China has announced a $46bn investment plan which will largely centre on an economic corridor from Gwadar in Pakistan to Kashgar in the Chinese region of Xinjiang. The BBC's M Ilyas Khan looks at the significance of the plans. Why has this got people talking? The money China is planning to pour into Pakistan is more than twice the amount of all foreign direct investment (FDI) Pakistan has received since 2008, and considerably more than the entire assistance from the United States, Pakistan's largest donor until now, since 2002.

Pakistani officials say most projects will reach completion in between one and three years, although some infrastructure projects could take from 10 to 15 years. So the investment is not going to be spread too thin over a longer period of time, as happened with the US assistance. But as defence analyst Professor Hasan Askari Rizvi warns, the real game changer is not the signing of deals, but their timely execution. What is behind the widening India-China trade gap? One of the items on Prime Minister Narendra Modi’s agenda, as part of his three-day visit to China, is the easing of non-tariff barriers for Indian exports, especially in pharmaceuticals and textiles. Such barriers are in the nature of restrictions on trade other than tariffs.

The push is part of India’s objective to reduce the trade gap with its largest trade partner. The gap had narrowed in the first five years of this century but has since been widening. In 2000-01, what China shipped to India was 1.8 times what India sent to China. By 2004-05, India had narrowed this multiple to 1.3 times. Modi braves the 'Chinese whirlwind’ - BBC News. Indian Prime Minister Narendra Modi arrives in China at a moment when his hosts' ambitious plan to redraw the map of Asia is gathering momentum.

China's Foreign Minister Wang Yi calls it a "Chinese whirlwind" in the world, and President Xi Jinping talks of an "Asia-Pacific dream" to set alongside the "Chinese dream of rejuvenation". Beijing's shorthand for this regional effort is "comprehensive connectivity". It means using investment, commerce, diplomacy and finance to create a Sinocentric network of Asian infrastructure and institutions, with each policy lever enhancing the next to bind the region firmly into a Chinese embrace. Modi braves the 'Chinese whirlwind’ - BBC News. Is China-Pakistan 'silk road' a game-changer? - BBC News.

Can Modi’s visit upgrade Sino-Indian ties? At the invitation by Chinese Premier Li Keqiang, Indian Prime Minister Narendra Modi will kick off his trip to China on Thursday. This is his very first state visit to China since Modi's inauguration in May 2014, as well as a return visit of Chinese President Xi Jinping's state visit to India in September last year. Ever since Modi assumed office, he has taken the initiative to actively develop India's relationships with Japan, the US, and European countries in no time, in order to promote the country's poor infrastructure construction and economic development.

But his diplomatic moves last year have proven that he is a pragmatist, rather than a visionary. How close are China/Pakistan and Japan/India/Vietnam to a regional war? China's 'One Belt, One Road' Strategy. TAIPEI — China's "one belt and one road" initiative could usher in a new era that sees China as the undisputed geopolitical powerhouse in the region, experts say. The initiative will establish new routes linking Asia, Europe and Africa. “One Belt and One Road”, Far-reaching InitiativeCHINA US Focus. On Sept. 7th 2013, during his state visit to Kazakhstan, Mr. Russia and China: An uneasy friendship. 'India's concerns over China-Pakistan economic corridor cliched' - timesofindia-economictimes.

DPIR Home Page. Without immigrants, none of us would be here. China’s AIIB and the US Reputation Risk. Beyond the US Rebalance to Asia: A Regional Perspective. A look at what US allies and partners are doing in the Asia-Pacific. By David Lang for The Diplomat April 29, 2015. India’s Infatuation With the UN Security Council. Permanent membership of the increasingly anachronistic body would offer prestige, but little else. While on a recent visit to Paris, France, Indian Prime Minister Narendra Modi, made a clear pitch for the country’s bid for a permanent seat on the United Nations Security Council (UNSC). India’s Infatuation With the UN Security Council. South China Sea: China’s Unprecedented Spratlys Building Program. Subi Reef looks next in line for an airstrip, as building and reclamation continue with unprecedented speed.

Iran-P5+1 talks: Breakthrough. China hits back over South China Sea. In defence, time for tough decisions. Interview with Ashraf Ghani. Afghan President Ghani's first visit to India yields little ‒ but New Delhi isn't unduly bothered. If OPEC is dead, how is Saudi Arabia still calling the shots in the oil market? To deal with the refugee crisis in Europe, you need to understand the cause.

A savage new world of terrorism.