Subscribe to read. US politics. The Most Popular Social Issues of 2017. Poundland SWOT Analysis. Trading Team. Since the launch of Poundland in 1990, we have had a dedicated trading team delivering Amazing Value into all our stores. 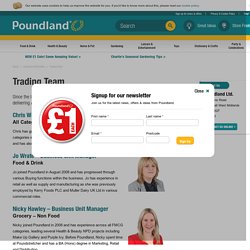 Chris Wall – Head of Trading. French Election: Market 'Nightmare Averted' As Euro Gains Against U.S. Dollar. China Makes 50% Of Your Stuff. How Many Chinese Brands Can You Actually Name? China's version of Google has 580 million users. 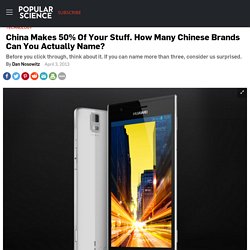 It makes, according to some surveys, around 50 percent of all the junk in your home. When an American company chooses to make something actually in America? It's news. Because that stuff is usually made in China. Yet according to a survey from HD Trade Services, a whopping 94 percent of Americans surveyed (about 1,500, surveyed online) could not name a single Chinese brand name. There are lots of reasons for this. The more obvious problem is that by American standards--and we're saying "American" here rather than "non-Chinese" because the survey focused on Americans--Chinese goods are often kind of crappy. OEC - United States (USA) Exports, Imports, and Trade Partners. The United States is the 2nd largest export economy in the world and the 5th most complex economy according to the Economic Complexity Index (ECI). 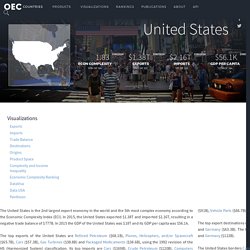 In 2015, the United States exported $1.38T and imported $2.16T, resulting in a negative trade balance of $777B. In 2015 the GDP of the United States was $18T and its GDP per capita was $56.1k. Meet today’s American consumer. US consumers feel better about their financial situation than they did a year ago, but they’re still hesitant to spend too much. 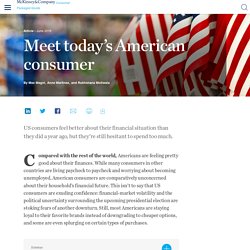 Compared with the rest of the world, Americans are feeling pretty good about their finances. While many consumers in other countries are living paycheck to paycheck and worrying about becoming unemployed, American consumers are comparatively unconcerned about their household’s financial future. Why your UK brand will fail in the US. Looking to expand into the US market? 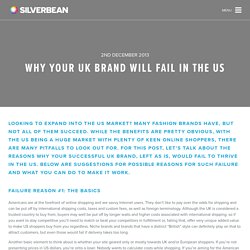 Many fashion brands have, but not all of them succeed. While the benefits are pretty obvious, with the US being a huge market with plenty of keen online shoppers, there are many pitfalls to look out for. America owes China $1tn. That’s a problem for Beijing, and Trump knows it. Forget the warm handshake. 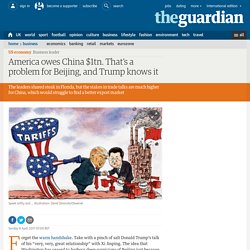 Take with a pinch of salt Donald Trump’s talk of his “very, very, great relationship” with Xi Jinping. The idea that Washington has ceased to harbour deep suspicions of Beijing just because the presidents of the world’s two biggest economies shared pleasantries over steak in Florida is fanciful. Xi will certainly be hoping Trump’s cordial welcome was for real, because China has much more to lose economically from a trade war than America does. This might sound counter-intuitive given that Beijing can deploy the economic nuclear option if Trump makes good on his campaign pledge to slap whopping tariffs on Chinese imports. An A-Z of business quotations: Globalisation. FEW words invoke such contrasting feelings as “globalisation”. 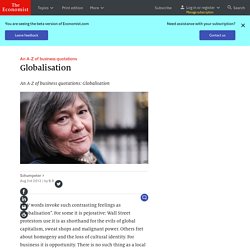 For some it is pejorative: Wall Street protestors use it is as shorthand for the evils of global capitalism, sweat shops and malignant power. Others fret about homogeny and the loss of cultural identity. For business it is opportunity. There is no such thing as a local firm, we are told; even the smallest shop in the remotest backwater is now part of the global supply chain. Dollar Tree, Inc.: Floral Supplies, Party Supplies, Cleaning Supplies. American Consumer Society. What gives us Americans the drive to consume to such an extent? 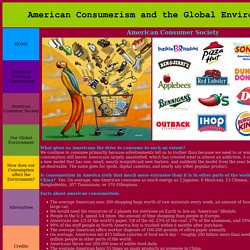 We continue to consume primarliy because advetisements tell us to (rather than because we need to or want to). This constant consumption still leaves Americans largely unsatisfied, which has created what is almost an addiction. A car company comes out with a new model that has one, small, nearly insignificant new feature, and suddenly the model from the year before is completely un-desireable. 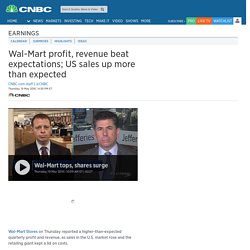 Recent store visits conducted by Jefferies show chronically bad locations were cleaner and better stocked, he said. However, deceleration in Wal-Mart's e-commerce business is cause for some concern, Binder told CNBC's "Squawk on the Street. " Wal-Mart's Biggs said the company's 7 percent constant-currency growth in e-commerce is not as strong as he would like, but added that the retailer is making "foundational progress. " "They have about 10 million SKUs online. But that hasn't grown fastest enough for them," Budd Bugatch, retail analyst at Raymond James & Associates, told "Squawk Box. " Total number of stores of Walmart International 2016, by country. 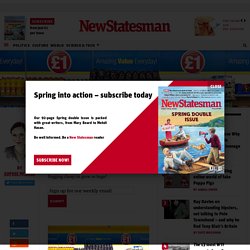